Home » Letters to the Editor

Letters to the Editor 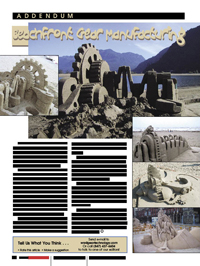 While reading through the January/February 2007 issue of Gear Technology, a question arose around the location of a picture that appears on page 80. The picture in question is at the top of the page and has the caption “Beachfront Gear Manufacturing” running through it. One believes the location to be Harrison Hot Springs in British Columbia. It looks very close, but I am not sure. Could you shed some light on this for us?

Thanks for looking into this for us.

Overseas Outsourcing Hurts Our Industry
(Editor’s Note: The following letter was in response to our online Voices question, “Is OEM Outsourcing Good or Bad for the Gear Industry?”)

OEM outsourcing [outside the United States] is in no way any good for any industry, let alone the gear industry. Gear manufacturing is one of the most difficult types of machining, and it takes training to do it right.

A lot of the companies that have begun outsourcing their gears now had to let a lot of good machinists go. Now those machinists are working (if they are lucky) in a machine shop atmosphere that is not challenging their knowledge in gear manufacturing. In many cases, that is because it was the only job they could find close to home.

I travel through all of North America and see plants from New York to Detroit to Mexico, and you cannot prove to me that outsourcing gears overseas or even to Mexico can be cheaper. There are a couple of plants in the Carolinas that are the most state-of-the-art gear manufacturing plants around, and you can’t tell me that outsourcing to lower labor cost countries is cheaper. The larger OEM companies that outsource their gears now do it only because they don’t what to invest in the equipment needed to be competitive.

You can walk in a gear plant in Detroit and there will be one guy operating one machine. In other parts of the country, it might be one guy for four machines, but at the plants in the Carolinas, it’s more like one guy for six or eight machines—and he’s not working as hard as the one guy in Detroit.

Anyway, when we close another plant, there are just that many more gear machinists to go on to other industries. There’s a bevel gear plant closing in Missouri soon. It had about 200 employees at the plant with about 75 working in the gear cutting area. Almost all will soon be working outside the gear industry and more than likely not in manufacturing at all. That’s not good for the gear industry, much less manufacturing.

Maybe we need to have a job fair for gear manufacturers in cities that are losing gear making plants?

American Gear Industry Still Optimistic About Growth in 2007
According to the results of our online poll, 43.4% believe their companies will employ more people in 2007 than in 2006. 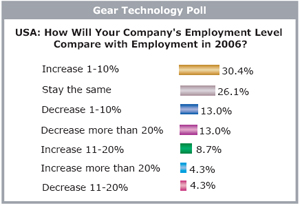