Management Summary
It is well known from the literature that the true bending stresses at the tooth root of spur gears are quite different from the nominal values that are utilized for the calculation of load capacity, either by standards or usual design rules.

No problems arise in using a load capacity rating when the simplified values are compared with the results of bending fatigue tests whose limits are calculated with the same schematic method.

But the "true" stress at the tooth root has different trends and values, and the designer must be aware of this difference, especially for light gears with narrow ribs and rims.

In this paper, an accurate FEM analysis has been done of the "true" stress at tooth root of spur gears in the function of the gear geometry. The obtained results confirm the importance of these differences.

Introduction
In today's gear industry, designers typically utilize rating methods of gear load capacity based on standards or the customary design rules. In these methods, nominal quantities are calculated in order to characterize the stress field in the gear. These nominal quantities are compared with limit values derived from tests using gears as specimens.

In the case of tooth bending strength, a cantilever-beam model is generally used to compute the bending stress. With this approach, Lewis in 1892 first calculated the tooth root stress of spur gear teeth (W. Lewis, "Investigation of the Strength of Gear Teeth," Proceedings of Engineers Club, Philadelphia). This model is still the basis for standard calculation methods successfully used in gear design. However, the local stress state--the "true" stress--in the tooth root fillet may be different from the nominal values obtained by this method.

In truth, the calculation of the maximum tensile stress at the tooth root is a three-dimensional problem: The plane strain or plane stress model can be used without approximations only in the case of infinite, or infinitesimal, face width. In Reference 1, starting from the analytical solution of Jaramillo (Ref. 2), Wellauer and Seireg introduced a study of the bending stress of gear teeth based on a cantilever-plate model. This method shows clearly that a three-dimensional model must be used to evaluate the variation of the tooth root stress along the face width. Current numerical methods, FEM and BEM, for example, are available for the solution of the elasticity problem for complex domains. Thus it is possible to calculate accurately the local strain and stress state in the tooth root, taking into account the real geometry of both gear teeth and body (Refs. 3 and 4).

This work analyzes the stress field at the tooth root using a three-dimensional, parametric, finite element solid model. Commonly used gear geometries having full body and thin-rimmed body connected to the hub by a web are also analyzed.

Full Body Gear
The methods that are commonly used for the calculation of gear-bending strength are based on a cantilever-beam model. The maximum tensile stress in the tooth root is therefore computed in a plane strain condition for an error-free gear pair. The influence of the face width and the variation of the tooth root stress along the gear width is not taken into account.

This study examines the bending stress along the tooth width for a fixed geometry and for different values of face width (Table 1). To begin, the case of an error-free spur gear pair with full body was considered. In the FEM analyses, only half of the pinion was modeled, since loading conditions and geometry are symmetrical to the middle plane of the gear width (Fig. 1). The load, applied at the highest point of single tooth contact (HPSTC), was modeled as a linear force uniformly distributed along the face width and perpendicular to the tooth surface. The hub of the pinion was fixed (Fig. 1). An example of the FE models used in the analyses is shown in Figure 2. 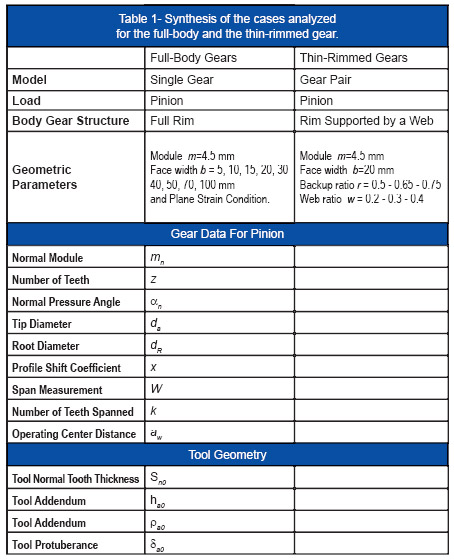 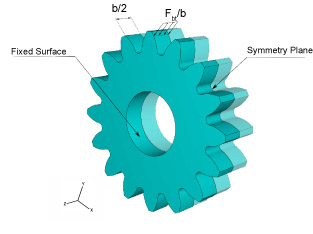 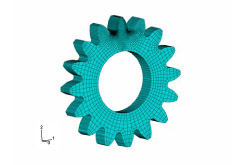 Even with uniform load along the face width, numerical results show that there are areas with different stress levels at the tooth root (Figs. 3 and 4). For values of the ratio b/m between the face width and the module commonly used in practical gear design, the stress level is higher in the middle of the gear width than in the side areas. In the center cross-section, the magnitude of the maximum principal stress is higher than on the sides of the gear, and an intermediate principal stress is present. In addition, the location of the highest value of the maximum principal stress in each cross-section changes along the face width, but the range is small. The location varies from 30° in the middle cross-section to 34° on the sides (Figs. 5 and 6) if the position in the tooth root fillet is described by the angle ψ, the angle between the symmetry line of the tooth and the tangent to the fillet curve. 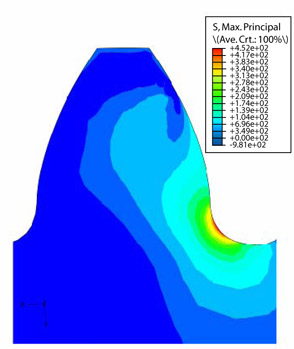 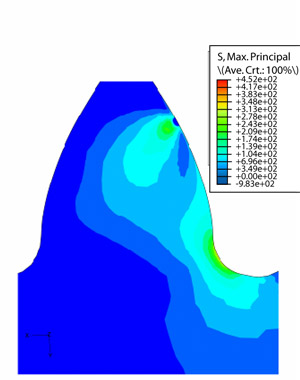 Figure 4--Maximum principal; stress contour plot in the side of the gear: Full-body gear with b = 20 mm 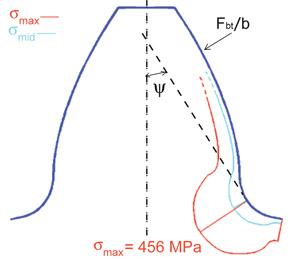 Figure 5--Maximum and intermediate principal stress distribution at the tooth root fillet in the middle cross-section: Full-body gear with b = 20 mm. 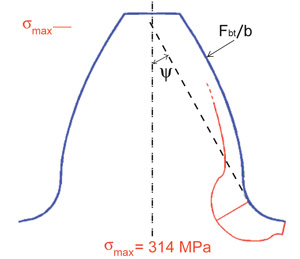 Figure 6--Maximum and intermediate principal stress distribution at the tooth root fillet in the sides of the gear: Full-body gear with b = 20 mm. 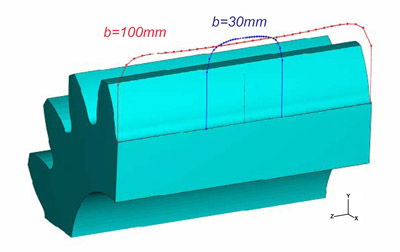 Figure 7--Bending stress distributions along the face width for full-body gears with b = 30 mm and b = 100 mm. 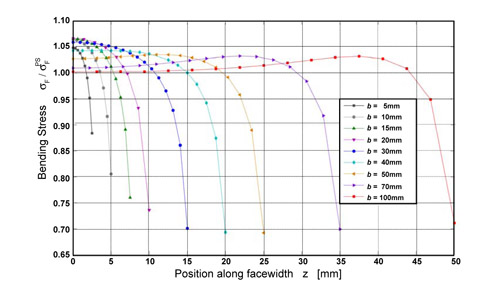 Thin-Rimmed Gears
A common design goal for gears in some power transmissions (e.g., aerospace transmissions) is reduced weight. To meet this goal, thin rims are often utilized. But rims that are too thin may adversely affect the bending stress. Several researchers have employed FEA for the purpose of assessing the influence of the rim thickness on the stress behavior in thin-rimmed gears. Yet most of these 2-D and 3-D analyses do not consider a web structure of the gear body. It is therefore believed that these models cannot give an accurate evaluation of the stress field at the tooth fillet of gears having a thin rim supported by a web.

A model of a spur gear pair is used here to evaluate the influence of both the rim and web thickness. In the geometrical model, the gear bodies are modeled as a thin rim supported by a web (Fig. 9). Nine different case studies are analyzed with all geometry parameters fixed, excepting the back-up ratio and the web thickness ratio (Table 1). The first, here referred to as r, is the ratio between the rim thickness SR and the tooth height. The second, referred to as w, is the ratio between the web thickness bS and the face width b. 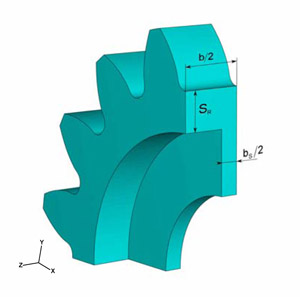 As opposed to the full-body gear case, the gear pair is modeled and the dry contact of the mating tooth surfaces is simulated by a numerical algorithm. The gear pair position is chosen to load the pinion tooth at the HPSTC, as in the full-body gear analyses. To impose kinematic and static boundary conditions, the pinion hub is fixed and the torque applied to the wheel hub (Fig. 10). 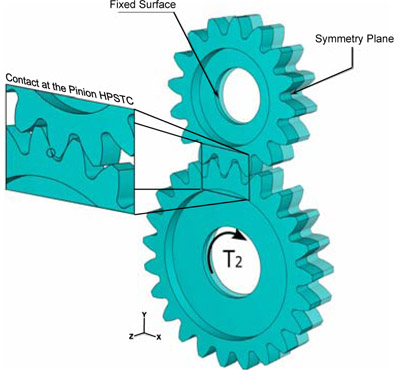 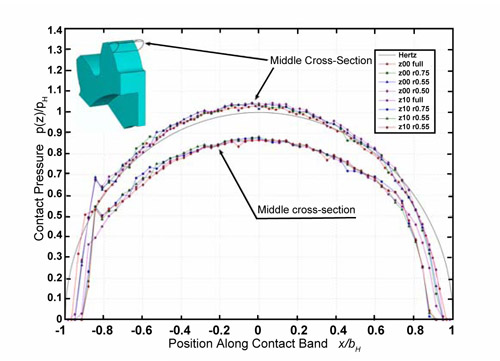 Considering the stress field at the tooth root, the results of the FEAs again show that the maximum bending stress is located in the central cross-section, and the minimum in the sides of the gear. But the difference between these two values is larger than in the full-body gear case. Moreover, the shapes of the maximum principal stress contour lines are different in the two positions along the gear width (Figs. 12 and 13). This is due to the differences between the stiffness of the central area--supported by the rim and the web--and the stiffness of the end areas which are supported only by the rim. As a consequence, the locations of the highest value of the maximum principal stress in the tooth fillet are also different in the two cross-sections; the location varies from 43° in the middle to 32° on the sides (Figs. 14 and 15). 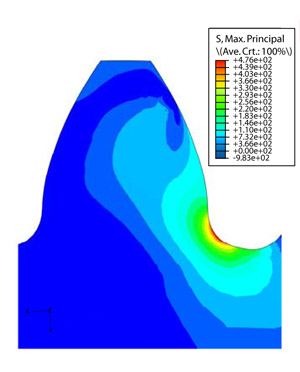 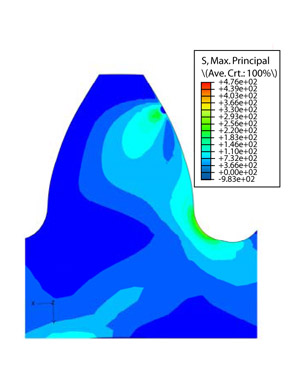 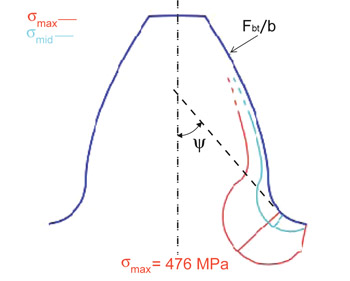 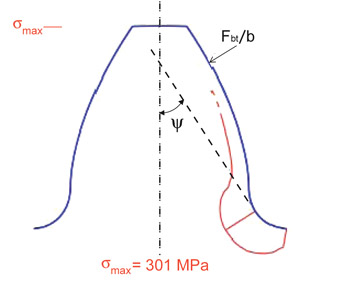 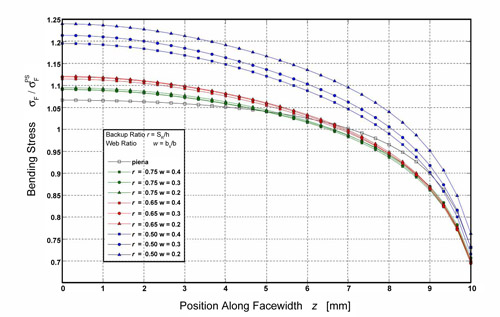 AGMA and ISO Thin-Rim Coefficients
Both the ISO and AGMA standards (Refs. 7 and 8) introduce stress-modifying factors for the bending stress calculation where the rim thickness is not sufficient to provide full support of the tooth root. The AGMA and ISO rim thickness factors KB and YB have the same meaning and same values as a function of the back-up ratio.

According to the ISO standard, the rim thickness factor should be defined as the ratio of the nominal tooth root stress for a thin-rimmed gear and for a full-body gear with the same geometry but without the back-up ratio. The magnitude of the rim thickness factor can be derived from diagrams (Fig. 17) or calculated according to the ISO standard with this formula for an assigned backup ratio: YB = 1.6 ln (2.242 x ht /SR) per 0.5

The values of the YB factor calculated for r = 0.5, 0.65 and 0.75 are listed in Table 2, while the ratio between bending stress for the full-body gear and the thin-rimmed gears investigated in this study are reported in Table 3. The differences between the values for a given r are large, but the effect of web is not taken into account in the YB factor. The values obtained have instead a good correlation with the results of numerical and experimental investigations described in Reference 5, where the effect of both the thin rim and the web thickness are considered.

Conclusions
This paper presents the results of an investigation on the variation of the tooth root stress field along the face width for full-body and thin-rimmed gears. The results of parametric, 3-D finite element analyses are used to characterize the influence of some significant geometric parameters on the bending stress distribution.

For full-body gears, the influence of the face width was investigated, showing areas with different stress levels along the tooth width. The results show that, for face width ratio close to practical gear design, most of the bending stress occurs in the center cross-section and the magnitude is higher than in the plane strain condition. The location in the tooth root fillet of the highest value of the maximum principal stress changes along the face width, but the values of the angle ψ are close to 30°.

For thin-rimmed gears, the influence of both rim and web thickness was investigated. The results show that for backup ratio values larger than 0.75, there is a very small influence on the tooth root stress, while the maximum fillet stress increases sharply as the backup ratio value is smaller than 0.75. Moreover, the more the web thickness is increased, the more the stress concentration factor decreases.

References
1. Wellauer, E. J. and A. Seireg, "Bending Strength of Gear Teeth by Cantilever-Plate Theory," Journal of Engineering for Industry, 1960.

Appendix
The numerical simulations were performed using ABAQUS version 6.5-1 in the pre/post processing (ABAQUS/CAE) and in the numerical analysis (ABAQUS/Standard).

The material was considered homogeneous and isotropic with a linear elastic behavior. Small displacement hypothesis was assumed for the analyses. In the full body gear analyses, hexahedral quadratic elements (3D) and bilinear quadrilateral (2D) elements fully integrated (ABAQUS codes C3D20 and CPE8 according to Ref. 9) were used for the domain discretization in the three- and two-dimensional models. In the thin-rimmed gears analyses, hexahedral linear elements (ABAQUS code C3D8I according to Ref. 9) were used for the mesh. These types of elements are suggested for the convergence of the contact algorithm and the elements are enhanced by incompatible modes to improve their bending behavior. The number of elements used was varied depending upon the particular gear width being considered.

In the analyses where the gear pair was simulated, the contact between the tooth surfaces was considered as a dry frictionless contact assuming small sliding between the surfaces. The contact constraint was simulated by the LaGrange Multiplier Method (i.e. using the ABAQUS option "Hard contact").