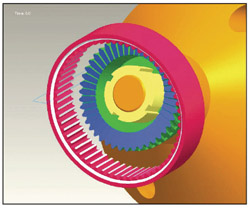 Rolled out at EMO 2007, the Scudding process is a continuous cutting operation that uses a tool design similar to a helical shaper cutter. It can be used for a wide range of gear applications including involute gears like sprocket or ring gears or on non-involute or non-symmetrical gears, like belt pulleys or straight synchronic gears.

In Scudding, the cutter feeds directly through the workpiece as the cutter and workpiece spin in a synchronized fashion. According to Scott Knoy, vice president of sales at American Wera Inc., the process can cut a gear in nearly the same time as hobbing and can be five to six times faster than shaping an internal gear.

The machine was originally developed for sliding-sleeve internal splines for manual transmissions, but it was soon realized that it could cut internal gears, external gears and non-symmetrical forms, and it could hard-finish internal gears with a carbide cutter.

“The response to the product has been very good,” says Knoy. “The automotive, aircraft, power tools and wind energy industries showed interest in the machine when it was introduced at EMO 2007.”

According to Knoy, the appeal of the technology was the cycle time and the flexibility to cut either internal or external gears. Daimler Europe currently has three machines on order and Tremec in Mexico has expressed interest as well.

“We currently have several tests scheduled to work in these different fields,” says Knoy. “The challenge will be to increase the capacity well over the current 320 mm size limit.”

The technology itself is a current slant on an older hard-gear finishing process developed in Germany called walzschaelan, (translated as “hob-peeling”). The elements of hob-peeling are now being used in a different manner, providing the current green process called Scudding. Wera is currently testing the hard finishing process using a carbide-cutting tool.

1. With a single process with one work spindle and one cutter spindle.

2. Two processes with one work spindle and two cutter spindles.

In the past, the processing of a sliding sleeve required operations such as turning, broaching, tooth-pointing, groove milling and lock-step milling on multiple machines. Separate washing stations were often required as well.

Innovations in cold- or net-forming technologies made it possible to produce “near finish” sliding sleeves, eliminating steps such as turning and broaching. The Wera machine allows the combination of Scudding, tooth pointing, lock-step milling and groove milling in a single machine.

According to the company’s press release, the new machine can reduce investment costs as well as personnel and labor. With fewer machines required, there’s more floor space and reduced energy consumption. Less inspection costs also add to its appeal.

For now, Wera Profilator is working with a German gear tool manufacturer and a German university to iron out the process. Currently, there’s a cross axis angle between cutter and workpiece that results in a small amount of over-travel in the cutting process. It’s an issue the company is addressing, using cutting tool technology and machine axial movements.