Lamentations continue—legitimately so—over the second-citizen status of manufacturing in the United States. The need undoubtedly continues for renewed support by government and educators for making things here once again. But in one manufacturing sector, the above take on the state of things is so last-century in its thinking relative to what is going on today.

That would be the manufacture, maintenance and components replacement of wind turbines that are beginning to sprout like wildflowers right here in the USA. And while some sections of the country are more conducive than others to wind turbine development and usage—the Midwest, West and Southwest, for example—there is also a ripple effect in terms of jobs creation from which neighboring states can benefit.

From coast to coast—from Texas to Iowa, the Dakotas to Ohio and Michigan, and from New York to California—these and other states are scrambling to attract wind turbine energy companies, OEMs and suppliers for two principal reasons—economic development (and re-development in many cases) and JOBS. Well-paying, manufacturing jobs in the high $40-k range and beyond. “Rust Belt”-designated states like Ohio, Iowa and Michigan are in some ways leading the charge in helping to develop the domestic manufacturing infrastructures necessary to the wind industry in this country. And indications are strong that they will continue in the role, with a number of other states joining them along the way. 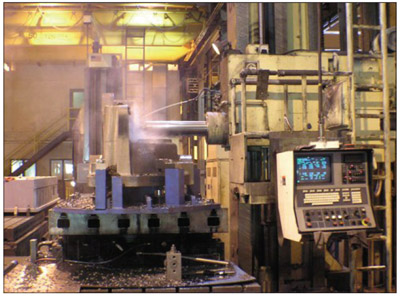 A look at an upper-gearcase component being premachined at Advance Mfg.

Burnishing the Rust Belt. American Wind Energy Association (AWEA) executive director Randy Swisher was quoted in the Des Moines Register in October saying that “Iowa has a base that’s only going to grow as manufacturers like Siemens, Clipper Windpower and Acciona Energy attract component suppliers.”

Wind turbines are comprised of approximately 8,000 components, and doing the math on how many workers are needed to make them on a steady basis is exciting to anyone yearning for a return of this country to manufacturing prominence.

Cleveland-based Advance Manufacturing—they make gearbox castings for turbines—is just one example of a veritable manufacturing renaissance. Since committing to devote almost half of its production to the turbine sector, says company president Herman Bredenbeck, “Our employment has increased by probably 20 percent over the last 12–15 months. And we are going to be adding one other large piece of equipment to support the business, so (hiring) won’t be stagnant. I think (turbines) are a great opportunity for all manner of companies relative to the metalworking trade. And I think Cleveland could stand some of that luck.” 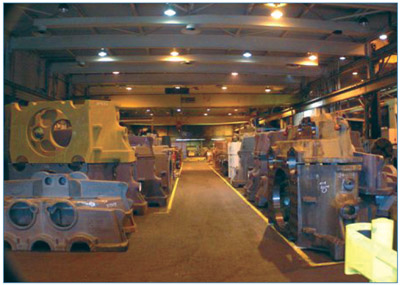 An array of gearcase components in Advance Mfg.’s staging area. To keep up with the demand, the company has grown its workforce by 20 percent in less than two years.

But, of course, more than luck is required. Economic development and the employment opportunities that derive from it cry out for—dare we say it?—vision. Determining that wind power is here to stay and looking beyond the horizon are what’s been keeping Paul Gaynor, president and CEO of UPC Wind, busy in the re-development of the shuttered Bethlehem Steel Works in Lackawana, NY. Appearing on engineerlive.com recently, he stated that, “Where Bethlehem Steel once supported an earlier industrial revolution, today the Steel Winds project is bringing new jobs and clean energy technology to the Lake Erie region.”

In the same report, Lackawanna Mayor Norman Polanski—who like his father before him once worked at Bethlehem—relates that the Steel Winds project has led to the opening of 12 new businesses and the first new hotel in over 100 years.

“Lackawana was a leader in the industries of the 20th century, and now claims a leadership position in this key energy technology of the 21st century.”

Back in the Midwest, in Iowa and Ohio alone, aggressive efforts to lure energy companies and turbine OEMs have led in the last two years to upwards of thousands of new positions paying as much as $23 an hour, and to billions of dollars in economic development. 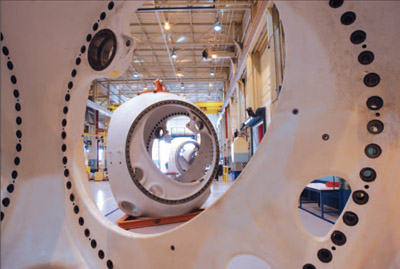 And in Michigan, one of the Rust Belt’s poster children, Gov. Jennifer M. Granholm was quoted recently as saying that “Developing alternative sources of energy is critical for our nation in the 21st century, and it can mean thousands and thousands of jobs for Michigan residents. Our goal is to replace those lost manufacturing jobs in the automotive sector with jobs in this alternative energy sector.”

And why not? States like Michigan, with a long manufacturing heritage and sound educational resources, are now poised—ironically enough—to be at the forefront in economic and jobs development in the booming alternative/renewable energy sectors. Who knows—perhaps wind power can even play a part in the rejuvenation of Detroit and its long-withered tax base. Good white collar jobs are certainly a part of turbine development and maintenance services, etc.

“One of the big things Michigan has going for it is the university base,” says Ray Mackowsky, president of Great Lakes Gear Technologies. “It has some of the most notable universities in the country and a lot of research and funding money and endowments. The engineering base is huge and gear-savvy.”

From cattle ranching to wind wrangling. Out west—South Dakota to be precise—wind power is gaining a headwind as well. The state, one of the windiest in the nation, is in line for development of several wind farms, and their contribution to the area’s economy. Contingent upon continued energy tax breaks and incentives from the state and Washington, as well as the development of new transmission lines to deliver the wind-generated electricity to other states, South Dakota Senator John Thune believes that his state has the potential to deliver power “for 55 percent of the needs in the country.” Unfortunately—and here is where the vision gene applies—the Bush Administration stripped proposed incentives and other perks for development of wind energy from the energy bill passed in December. But the potential for manufacturing jobs, where few now exist, remains.

Taken together, wind power development can be a self-sustaining industry and renewable power source for generations to come. Most predictions state that wind power will ultimately account for 20 percent of the country’s energy source. Beyond that, wind power can play a part in the redevelopment of some portion of the EPA-estimated 450,000 brownfields blotting the country’s maxed-out and abandoned manufacturing areas. This leads to new usage of and reinvestment in these properties, the resultant boost in local and state tax bases and not just good-paying manufacturing jobs, but scores of environmental cleanup projects as well.

But it is manufacturing jobs that matter most to anyone reading this—jobs making the gears, gearboxes, castings and custom bearings for wind turbines—to name just four of the those 8,000 turbine components that are desperately needed for further growth in our domestic wind power industry and renewable energy efforts.

And that can be a definitive win-win for all Americans, much to the chagrin of OPEC.