Application of Gears with Asymmetric Teeth in Turboprop Engine Gearbox

Management Summary
This paper describes the research and development of the first production gearbox with asymmetric tooth profiles for the TV7-117S turboprop engine. The paper also presents numerical design data related to development of this gearbox.

In all these and other related publications, however, mathematical modeling and lab specimen testing usually limit practical implementations of gears with asymmetric tooth profiles.

This paper is dedicated to the application of gears with asymmetric tooth profiles in the gearbox of the TV7-117S turboprop engine. This engine was used in the Russian airplane IL-114 for several years and is going to be used in IL-112, MIG-110 and TU-136 airplanes. The gearbox was developed by the Klimov Corporation (St. Petersburg, Russia) and Gear Transmission Department of CIAM (Central Institute of Aviation Motors), Moscow, Russia. The gears with asymmetric teeth were designed non-traditionally, without using the basic or generating rack. This design method is based on the Theory of Generalized Parameters, developed by Prof. E.B. Vulgakov (Ref. 1) and is now known as Direct Gear Design. 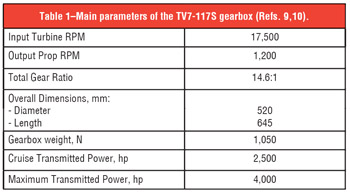 The TV7-117S gearbox arrangement (Fig.1) is the same as in previous-generation AI-20 and AI-24 turboprop engines. This arrangement has proved to provide maximum power transmission density for the required total gear ratio. 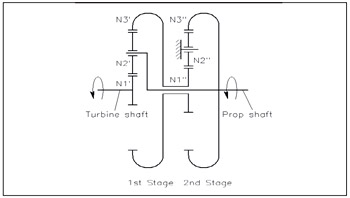 The first planetary-differential stage has three planet gears. The second coaxial stage has five planet (idler) gears and a stationary carrier. Part of the transmitted power goes from the first stage carrier directly to the propeller shaft. The rest of the transmitted power goes from the first-stage ring gear to the second-stage sun gear, and then through the planets to the second-stage ring gear, also connected to the propeller shaft. 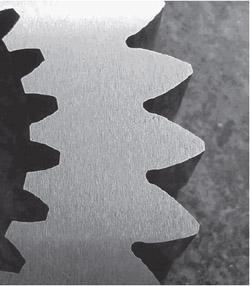 Direct Gear Design develops the asymmetric tooth form by using two involutes of two different base circles, as shown in (Fig. 3). The equally spaced teeth form the gear. The fillet between teeth is not in contact with the mating gear teeth. However, this portion of the tooth profile is also designed independently, providing minimum bending stress concentration and sufficient clearance with the mating tooth tip in mesh. 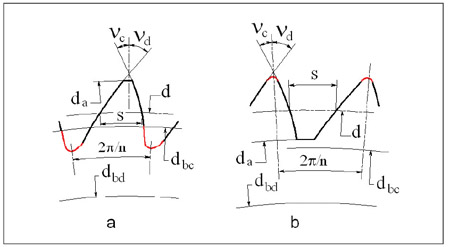 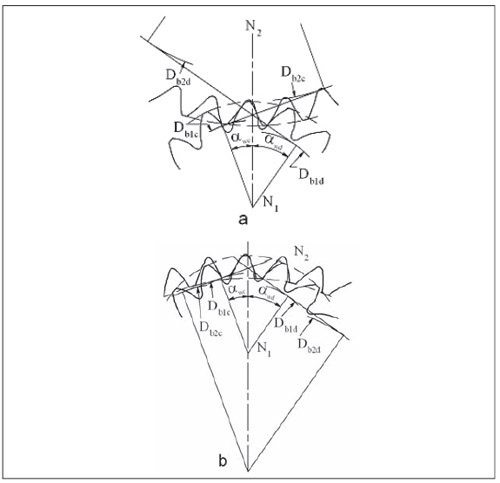 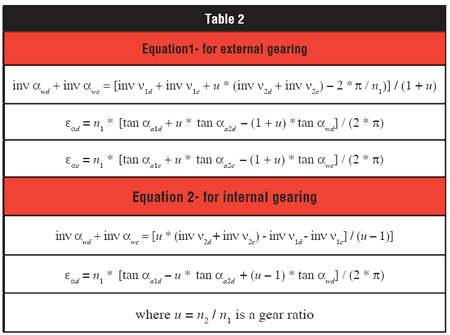 In propulsion gear transmissions, the tooth load on one flank is significantly higher and is applied for longer periods of time than the opposite one. An asymmetric tooth shape reflects this functional difference. Design intent of asymmetric gear teeth is to improve performance of the primary drive profiles by some degrading performance of the opposite coast profiles. The coast profiles are unloaded or lightly loaded during a relatively short work period. Asymmetric tooth profiles also make it possible to simultaneously increase the contact ratio and operating pressure angle beyond the conventional gearsâ€™ limits. In planetary gear systems, the planet gear is usually in simultaneous contact with the sun and ring gears. The tooth load and number of the load cycles are equal for both flanks of the ring gear. However, one flank of the planet gear is in mesh with the concave tooth flank of the ring gear with internal teeth. The resulting contact stress in this mesh is much lower in comparison with contact stress of the convex tooth flanks in sun-planet gear contact, which defines the load capacity and size of the gears. In order to reduce this contact stress, the higher operating pressure angle was chosen for the sun-planet gear contacting tooth flanks. This choice is in compliance with the ANSI/AGMA 6123-B06 standard "Design Manual for Enclosed Epicyclic Gear Drives," which states: "Best strength-to-weight ratio is achieved with high operating pressure angles at the sun-to-planet mesh, and low operating pressure angles at the planet-to-ring gear mesh." 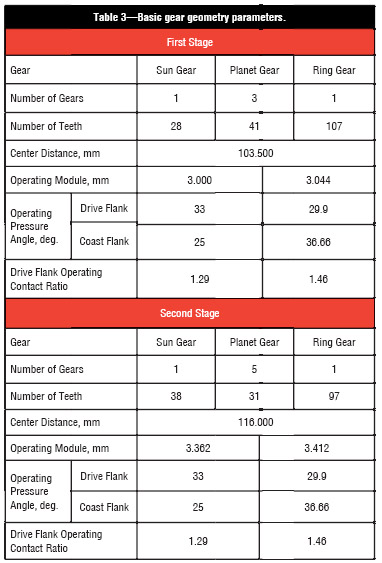 
The geometry of asymmetric teeth does not allow using the traditional Lewis equation to define the tooth bending stress. Initially the photoelastic models (Fig. 5a) were used for the bending stress definition. Later FEA (Fig. 5b) allowed evaluating stress level more efficiently. 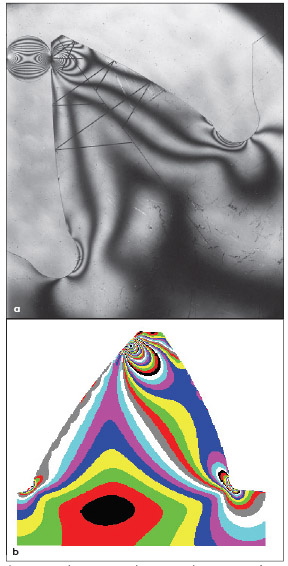 Machining of the directly designed sun and planet gears with asymmetric teeth requires custom gear hobs. The hob rack profile is defined by reverse generation of the gear profile. It is similar to the gear rack profile generated by a shaper cutter when this cutter is replaced by the asymmetric gear profile. Custom shaper cutters are used to machine the ring gear with internal teeth. Their profiles are also defined by reverse generation based on the ring gear geometry. The gear blank position during machining must provide the asymmetric teeth pointed in either the clockwise or counterclockwise direction. Otherwise, the drive flank of one gear will be positioned in contact with the coast profile of the mating gear, and assembly would be impossible.

After tooth cutting, the gears are carburized and heat-treated to achieve tooth surface hardness > 59 HRC with the case depth of 0.6-1.0 mm. The core tooth hardness is 33-45 HRC. Final gear machining includes tooth grinding and honing. Asymmetric gear flanks require special setup for both these operations.

The TV7-117S turboprop engine gearbox components and assemblies are presented in Figs. 6-10. 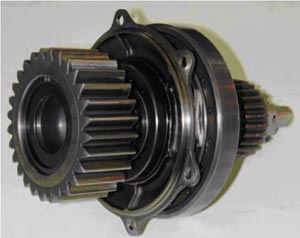 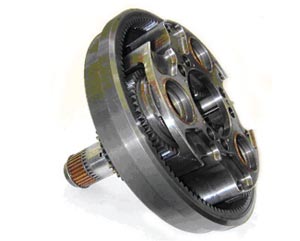 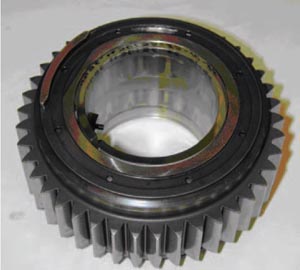 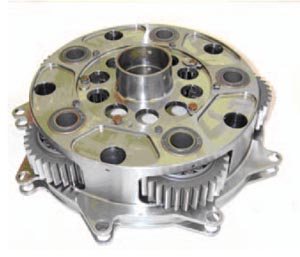 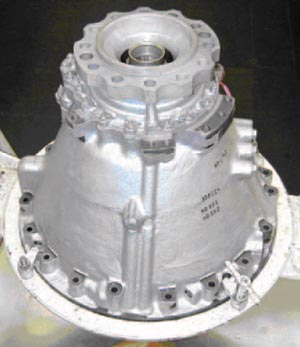 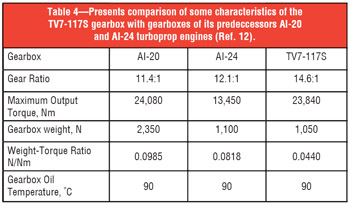 The new design and technological approaches that have found their realization in the TV7-117S engine gearbox were recommended for development of the gearboxes for advanced aviation engines.

Dr. Vladislav L. Dorofeyev isÂ a lead designer of the gear transmissions department of the Federal State Unitary Enterprise at the Moscow Machine Building Production Plant "Salut." "Salut" is a specialized enterprise for the production and maintenance of engines for Russian military and commercial aircrafts. Dr. Dorofeyev is also a professor at the Moscow State Aviation Technological University named after K.E. Tsiolkovsky.

Dr. Alexander L. Kapelevich is president of the gear design consulting firm AKGears, LLC, located in Shoreview, Minnesota, USA. Working in the CIAM in the 1980s, he optimized the asymmetric tooth geometry for the TV7-117 engine gearbox. He is also a developer of the Direct Gear Design method. Dr. Kapelevich is an active member of the AGMA aerospace and plastic gearing committees.

Dr. Alexander S. Novikov is general director of the Moscow Machine-Building Plant named after V.V. Chernyshev, Moscow, Russia. The Moscow Machine-Building Plant manufactures and overhauls a number of aero engines for military and commercial aircrafts, including the TV7-117S turboprop engine. Mr. Novikov executes the general management of the company.