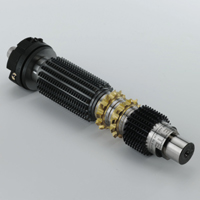 A machine operator mounts a gear blank in a hobber. A few moments later, he removes the workpiece, a crowned helical gear that has been finished, deburred and chamfered--and that has no twist.

This combination of operations is possible using a new product available from LMT-Fette Inc. The product is a tool system that consists of a roughing hob, a set of deburring and chamfering tools, and a finishing hob, all mounted on one arbor. The finishing hob is the tool that removes twist from gears. Called a "twist-free hob," the tool was designed for high-volume production of the same or similar gears. Jointly developed by the Liebherr Group and Fette, the tool can be made to hob external spur or helical gears without twist, also called profile bias.

Twist is a defect that can result in more gear noise and less load carrying capacity. The defect is caused by large tapers or crowning, especially on helical gears. Twist occurs on both spur and helical gears, but it’s negligible on spurs.

In the past, twist was corrected via finishing operations. "This correction has been done in grinding for a while," says Reinhold Cordella, a regional sales manager for Liebherr Gear Technology Inc. in Saline, MI. Other finishing methods for removing twist included shaving and honing.

The twist-free hob, however, eliminates the defect via its modified profile and its diagonal movement across gear teeth. The hob’s modification is a gradient change in its profile. This change is synchronized with diagonal hobbing so the tool can both finish hob and compensate for twist in the same operation.

In principle, the twist-free hob can be used on any hobber capable of diagonal hobbing, says Oliver Winkel, application engineer-gear cutting for Liebherr Verzahntechnik GmbH of Kempten, Germany. 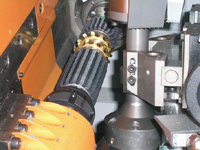 During operation, the hob head swivels to different angles to rough hob,to deburr and chamfer and to finish hob, so the lead and helix angles are correct for the two hobs and the lead angle is also correct for the deburr-chamfer tools.

To speed up this process, the hobber should have a quicker-than-usual A-axis, Winkel says. He adds that hobbers can be retrofitted so the A-axis can achieve the necessary speed.

The tool system can accommodate its three tools via the twist-free hob. That tool is a shank-type hob with an integrated arbor. A roughing hob and a set of Fette’s Chamfer Cut tools can then be mounted on the arbor.

Manufactured by Fette, the twist-free hob tool system was introduced in September, at EMO Hannover in Germany, on a Liebherr hobbing machine with direct drive technology. A month later, Fette exhibited the tool system at Gear Expo 2005 in Detroit, MI.

The set of Chamfer Cut tools can be made to deburr and chamfer either external spur or helical gears. The tools deburr and chamfer the roots and side edges of gear tooth flanks. To use the tools, a hobber needs tool spindles able to turn in both directions and special software from the hobbing machine’s manufacturer.

However, gear manufacturers need large shifting ranges on their hobbers to use the Chamfer Cut tools. The tools reduce shifting ranges, thereby reducing hob efficiency, so Winkel suggests hobbers with shift ranges of 180-300 mm. That way, the machines aren’t as affected as ones with smaller ranges.

Specifically, the two hobs can be designed independently, so each has the optimal number of threads, number of gashes and specific tooth design. Consequently, the roughing hob can be designed for optimal cycle time without worrying about the workpiece’s final profile quality. Also, the roughing hob has a longer life in production use than a combined roughing and finishing hob.

"The roughing tool can be used to normal wear points without having to stop production and recondition the tool when the quality of the finished profile would be in question," says Darryl Witte, product manager-gear tools for Fette’s operation in Cleveland, OH.

Moreover, the finishing hob can be optimized to create a quality profile and can be made of alternate material to increase hob life. As Witte says: "The finishing tool far exceeds existing production amounts per sharpening as that tool is no longer cutting the root or roughing the gear."

Also, the tool system can solve problems that some gear manufacturers have with carbide hobs used for both roughing and finishing because of their limited stock removal and their rate of breakage due to the roughing process.