Theoretically, the face hobbing process is based on the generalized concept of bevel gear generation in which the mating gear and the pinion can be considered respectively generated by the complementary generating crown gears, as shown in Figure 1. 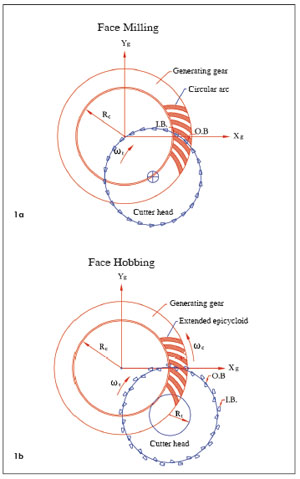 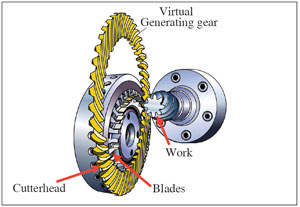 Figure 2--Relationship of the cutting tool, generating gear and the work.

The face hobbing system can use advanced design methodology to formulate the parameters of the generating gears. As a result, face hobbed spiral bevel and hypoid gear sets can offer optimized bearing contact, bias direction and function of transmission errors, resulting in reduced working stresses, vibration and noise. Optimized face hobbed gear sets are less sensitive to errors of alignment. 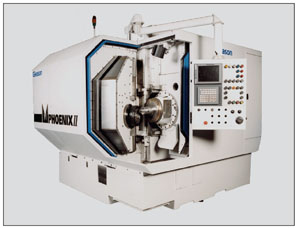 where Ra is called the ratio of roll. Basically, the second set of related motions provides generated tooth geometry in the profile direction. 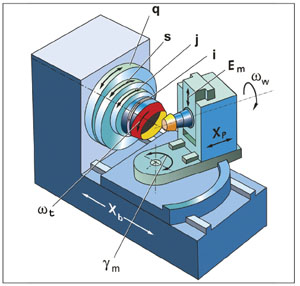 In some specially designed cutter heads, the inside and outside blades are not evenly spaced and therefore the blade radial position is correspondingly adjusted. Basically, the tool geometry can be defined by the major parameters of the blades and their installation on the cutter heads. Since the face hobbing tooth surfaces are kinematically generated by the cutting edges of the blades,an exact description of the cutting edge geometry in space is very important. The blade edge geometry can be described in the coordinate system St that is connected to the cutter head with rotation parameter Θ. The major parameters that affect the cutting edge geometry are:nominal blade pressure angle α, blade offset angle δ, rake angle λ, and effective hook angle κ.

Figure 5 shows a basic geometry of the inside and outside blade edges, which are represented in the coordinate system Sb that is fixed to the front face of the blade. The origin Ob coincides with reference point M at reference height hb. Generally, the blade geometry consists of four sections: (a) tip, (b) Toprem®, (c) profile, and (d) Flankrem. 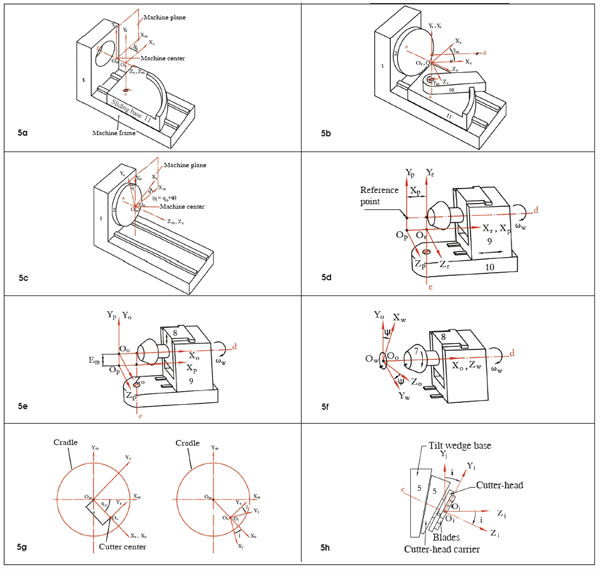 Sections (a) and (d) are circular arcs with radii re and rf respectively. Sections (b) and (c) can be straight lines, circular arcs, or other kinds of curves. Section (c) generates the major working part of a tooth surface. Toprem and Flankrem relieve tooth root and tip surfaces in order to avoid root profile interference and tooth tip edge contact. In order to obtain a continuous tooth surface, the four sections of the blade curves should be in tangency at connections. For a current cutting point P on the blade, the position vector and the unit tangent can be defined in the coordinate system Sb ,

where u is the parameter.

Equations 6 and 7 can be represented in the cutter head coordinate system St, as

Kinematical Simulation of Face Hobbing Indexing Motion As described above, the indexing motion generates the cutting path or the tooth lengthwise curves that are called the extended epicycloids (see Fig. 3). The indexing motion can be simulated and visualized in terms of the motion relationship between the generating gear and the cutter. Furthermore, such a motion can be represented in the cross-section plane that intersects the blade edges at the reference point M and is perpendicular to the axis of the generating gear so that the motion can be visualized on a plane, as shown in Figure 6. 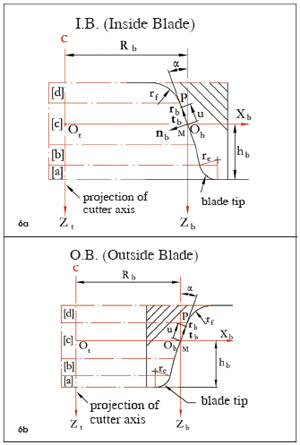 The simulation is based on the following matrix transformation, which represents the relative motion of the cutter head with respect to the generating gear.

The coordinate system Sg is connected to the generating gear (Fig. 6), and xg and yg are the coordinates of the tooth lengthwise curves, i.e., the extended epicycloids. Coordinates xt and yt specify points on the blades in system St. SH and SV are the initial horizontal and vertical settings of the cutter head. Giving a value to parameter Θ corresponds to a specific cutting position. Figures 6 (a) and (b), respectively, show a single cutting position and multiple cutting positions, from which the kinematical generation of tooth lengthwise curves and the tooth slots can be visualized. 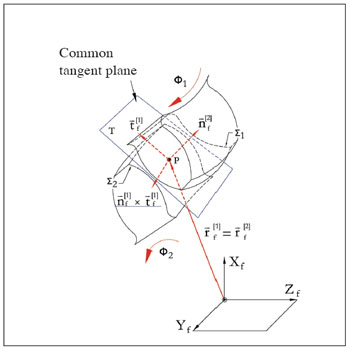 The machine tool settings and the tooth surface generation model can be derived based on traditional cradle-style mechanical machines. Computer codes have been developed to "translate" the machine settings, and CNC hypoid gear generators move together in a numerically controlled relationship with changes in displacements, velocities, and accelerations to implement the prescribed motions and produce the target tooth surface geometry.

In this paper, a generalized face hobbing kinematical model is developed. The proposed model, shown in Figure 9, is based on the mechanical spiral bevel and hypoid gear generators. 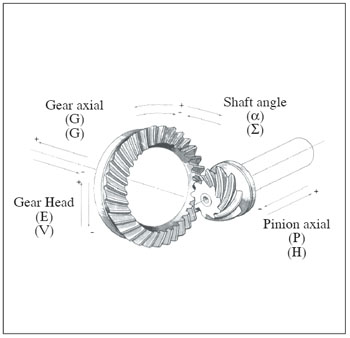 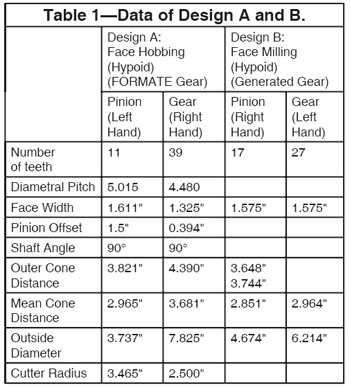 Face hobbing machine settings are: (1) ratio of roll Ra; (2) sliding base Xb; (3) radial setting s; (4) offset Em; (5) work head setting Xp; (6) root angle γm; (7) swivel j; and (8) tool tilt i. Although the kinematical model in Figure 9 is based on the cradle-style generators, considering the universal motion ability of CNC machines, the machine settings can be generally represented as

The first terms in Equations 13-20 represent the basic constant machine settings and the second terms represent the dynamic changes of machine setting elements, which might be kinematically dependent upon the motion parameters of the cradle rotation angle φ. In current practice, higher order polynomials are used (Ref. 2). These motions can be realized through computer codes on the CNC machine. Equations 13-20 provide strong flexibility for generating all kinds of comprehensively crowned and corrected bevel gear tooth surfaces. 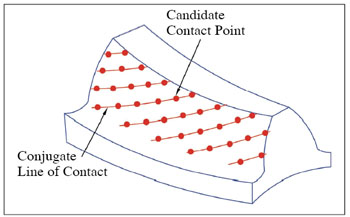 where matrices Mwo, Mop, Mpr, Mrs, Msm, Mmc, Mce, Mej and Mji can be obtained directly from Figures 12 and 13 and Equations 21 and 22 can be simply re-written as

here subscript "w" denotes that the vectors are represented in the coordinate system Sw. 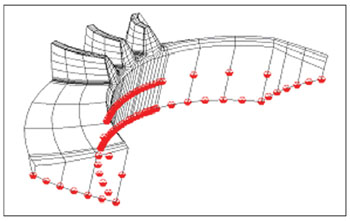 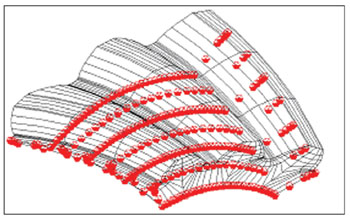 Tooth Surface of a Non-Generated (Formate)Member As discussed above, the non-generated (Formate)gear tooth surface is the complementary copy of the generating gear tooth surface, which is kinematically formed as the cutting path of the blade edge along an extended epicycloid lengthwise curve. In Formate gear generation, the cradle is held stationary and parameter φ is assumed to be zero. Therefore, Equations 24 and 25 can be re-written as

where nw is obtained from Equation 28, and the relative generating velocity vw is determined by

Equation fw(u, Θ, φ)=nwxvw=0 is called the equation of meshing (Ref. 4). Equation 30 defines the position vector, the unit normal, and the unit tangent at the current cutting point P on the generated work tooth surface. All these vectors are considered and represented in the coordinate system Sw that is connected to the work. A unit cradle angular velocity, i.e., ωc=1 can be considered. The equation of meshing is applied for determination of generated tooth surfaces.

Implementation of the Mathematical Models Figures 12 (a) and (b) show geometric models of a pinion and a gear generated based on Equations 26-30. A very important application of the developed mathematical models is the development of tooth contact analysis for the face hobbed spiral bevel and hypoid gears. Tooth contact analysis (TCA) is a computational approach for analyzing the nature and quality of the meshing contact in a pair of gears. The concept of TCA was originally introduced by Gleason Works in the early 1960s as a research tool and applied to spiral bevel and hypoid gears (Ref. 7). Today, TCA theory has been substantially enhanced and generalized and applied in advanced synthesis of face milled spiral bevel gears (Refs. 8, 9).

Based on the developed mathematical models for face hobbing generation of spiral bevel and hypoid gears, an advanced TCA program for the face hobbing process has been developed for both non-generated and generated spiral bevel and hypoid gear drives. The program incorporates simulation of meshing of the whole tooth surface contact including the Toprem and Flankrem contact. Tooth edge contact simulation is also developed and included in the program. Figure 13 shows an example of the output interface of the advanced TCA. Typically, a TCA output illustrates bearing contact patterns on both driving and coast sides of the tooth surfaces and the corresponding transmission errors. Information on the gear drive assembling adjustments is also provided. 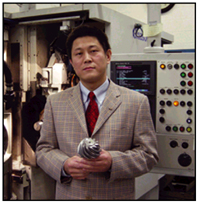 Dr. Qi Fan is a bevel gear theoretician at The Gleason Works of Rochester, NY. Prior to that, he worked in the Gear Research Center at the Mechanical and Industrial Engineering Department at the University of Illinois at Chicago. Fan has authored more than 20 papers on bevel gear research.