Dana Corp. is developing a process that carburized a straight bevel gear to a carbon content of 0.8% in 60 fewer minutes than atmosphere carburizing did with an identical straight bevel.

The Dana process, called AtmoPlas, uses plasma and microwaves to carburize workpieces at atmospheric pressure. Moreover, in the above test, the atmosphere carburized gear achieved a case depth of 0.035", the AtmoPlas processed gear: 0.045".

The test was one of many AtmoPlas trials being run by Dana with its lab research system to benchmark the carburizing of various single workpieces.

In trials, the microwave technology results in shorter cycle times than atmosphere carburizing, with time saved in the heat-up and carburizing parts of the cycle. "This would translate to overall lower gas consumption and lower power cost," says Kuruvilla Cherian, a Dana senior materials scientist and one of the developers of the AtmoPlas process.

In the above benchmark test, the straight bevels were differential side gears with outer diameters of 70 mm (about 2.76"). They were made of 8620 steel and had starting carbon contents of 0.2%. The AtmoPlas lab system was programmed to carburize its gear at 930 °C. The other identical gear was atmosphere carburized at the same temperature. 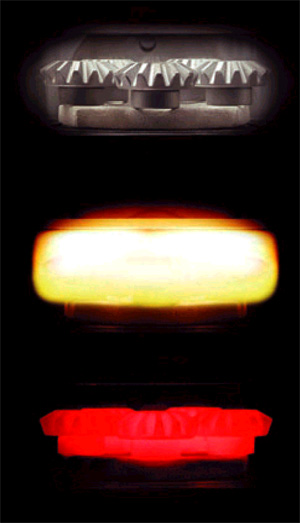 Microwave-Based Carburizing--Dana Corp. has developed a process, AtmoPlas, that uses microwaves and plasma at atmospheric pressure to carburize gears. Differential side gears are shown (from top) before carburizing; during heat-up, while plasma absorbs microwave energy; and right after the microwaves are discontinued.

Cherian and application engineer John Hudson, another AtmoPlas developer, were also using the test to achieve a target effective case depth: 0.035". The atmosphere carburized gears achieved that depth after 272 minutes. In 212 minutes, the AtmoPlas processed gears had 0.010" of additional case depth.

Having surpassed the target, Cherian and Hudson have to run further tests to find the right time and temperature combination to get the 0.035" depth. The combination will likely be even less than 212 minutes.

The heat treatments were designed to harden the gears to greater than 57 HRc. Cherian says the atmosphere carburized and AtmoPlas processed gears reached the target hardness and were comparable to each other.

Also, Cherian points out that AtmoPlas results in smaller grains. In trials with coupons, he and Hudson were able to compare AtmoPlas processing to atmosphere and vacuum carburizing. In the cases,grains were 15.9-22.5 microns for the vacuum carburized coupon, 11.2-22.5 microns for the atmosphere carburized,and 5.6-11.2 for the AtmoPlas processed. Smaller grains mean: "Higher strength properties in the gears," Hudson says.

AtmoPlas heat treats workpieces at atmospheric pressure using plasma heated by microwave energy. The system consists of two chambers, an outer one and an inner one. Workpieces are placed inside the inner chamber. A mixture of three gases--argon, hydrogen and nitrogen--is injected into the chamber, which is insulated with ceramic walls.

Acetylene makes up a small amount of the total volume of gases--"The acetylene is typically less than 5%," Cherian says. Still, it is one of the more expensive gases, so Cherian and Hudson are looking into using methane as the enriching gas for the next round of benchmark tests with single workpieces.

The inner chamber’s atmosphere doesn’t include oxygen, so the system doesn’t create intergranular oxidation in its workpieces. By avoiding IGO, the AtmoPlas processed gears would avoid the possibility of their ultimate strength being reduced.

"We can establish our atmosphere very quickly with a minimal amount of gas," Hudson says. "We have no reason to keep the module running when empty."

Besides differential side gears, AtmoPlas has carburized crown gears with 8" diameters, as well as 7" long spiral bevel pinions. The system’s gear trials have mostly consisted of gears made of 8620 alloys, but AtmoPlas has also been used to carburize gears made of manganese-chromium alloys. Cherian and Hudson plan additional trials of the Mn-Cr gears in conjunction with high pressure gas quenching.

AtmoPlas needs the trials in part to catch up with atmosphere and vacuum carburizing. Those processes have known time-temperature profiles. Heat treaters with gears of a certain type and size and with a certain target case depth and hardness, know or can easily figure the needed time-temperature profile for existing commercial processes. AtmoPlas, still in development, doesn’t have established profiles yet.

"We’re in the stage of developing the time-temperature profiles for AtmoPlas," Hudson says. He adds that AtmoPlas’ carburizing profile can be changed like vacuum carburizing’s profiles, so the microwave technology can achieve desired case depth and percent carbon.

Also, the process hasn’t been tested in a production-scale system yet. Hudson says the pilot production system is scheduled for installation this year, in the fourth quarter, in a production, vacuum carburizing line with a gas quenching system. The pilot system would be built with a work area 24" wide, 36" deep and 24 or 30" high, with a rated gross load of 500 kilograms. Once installed, the system would undergo three to six months of testing via production work. Then Cherian and Hudson would be able to compare its power consumption with those of production-scale atmosphere and vacuum carburizing. 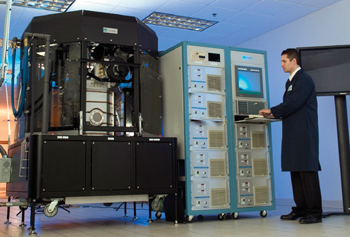 Next Step: A Production-Scale Machine--Development of the AtmoPlas process has progressed to trials using the above lab pilot system, the MD-800. Dana’s next step is to create a pilot production-scale machine for further trials.

Also, after the testing, Dana would be able to decide when AtmoPlas will become commercially available. The technology would be licensed to equipment manufacturing companies. In fact, Dana has already announced joint development agreements with ALD Vacuum Technologies GmbH of Hanau, Germany, and Rübig GmbH & Co. KG of Wels, Austria.