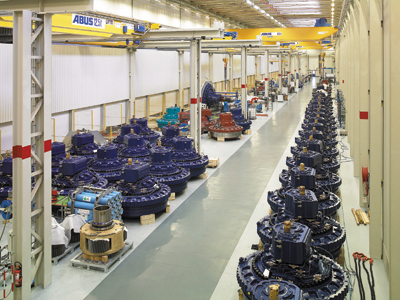 "An industrial business with a very important growth potential for the next decade." That’s the wind energy industry as described by Ivan Brems of gear manufacturer Hansen Transmissions International nv.

Brems, vice president-corporate marketing and business development, should know. Hansen Transmissions is much involved in the business of turning wind power into electricity. Headquartered in Antwerp, Belgium, the company has a new factory that only manufactures gearboxes for utility-scale wind turbines.

Such turbines generate 1-3 megawatts of electricity. Each with a combination of planetary and helical gears, they can be found around the world in wind farms--collections of massive towers whose rotating blades generate electricity.

Though decades old, the wind energy industry still has growth potential in its main markets: Europe, North America and Asia.

Europe is the most developed wind energy market and has the highest demand, according to figures from the Global Wind Energy Council (GWEC). Europe had 40,900 megawatts of installed capacity at the end of ’05. The next largest market, North America, had 9,800. Also, the European market installed no less than 5,000 megawatts of wind power each year in ’03, ’04 and ’05.

Portugal, Italy, the United Kingdom and France were among the 10 fastest growing countries in ’05, with each installing at least 350 megawatts of new capacity.

For U.S. gear manufacturers, the fastest growing market for wind turbine gears is their own. America installed more megawatts than any other country during ’05: 2,400. The next largest amount of new capacity was 1,800, installed by Germany.

Brems says the U.S. will remain one of the largest wind energy markets during the next 10 years, possibly installing as much as 40,000 megawatts of wind turbine capacity.

Also, Canada appears to be an emerging market, installing 120 and 230 megawatts of new capacity in ’04 and '05, respectively.

"The Canadian market is really breaking out now," Brems says. "Over the next 10 years, I believe they’ll have a growth potential of generating 6,000-10,000 megawatts of wind power generation."

"I would consider Asia to be the largest emerging market," says David Neidig, vice president of ITAMCO, a manufacturer of wind turbine gears.

According to GWEC figures, India and China are fast growing. India installed 1,430 megawatts during ’05, the fourth largest amount that year. China installed 490. Brems predicts each of the two Asian countries will install 15,000-20,000 megawatts in the next 10 years.

Brems gives several reasons for wind energy’s continuing growth: cost, public support for a clean environment, the growing need for energy around the world, and the ongoing emergence of new markets. Another of his reasons is political commitment.

Wind energy’s main markets include countries committed to the Kyoto Protocol, an international agreement for reducing emissions of greenhouse gases. A main way of reducing emissions is to generate more electricity from wind power. Countries committed to the protocol include Denmark, France, Germany, Italy, Portugal, Spain, the United Kingdom, Canada, India and China.

The U.S. doesn’t operate under the Kyoto Protocol, but federal and state governments promote the development of wind energy. More than 15 state governments promote it by mandating that specific amounts of their electricity must come from renewable energy sources, one of which is wind energy, reports the Union of Concerned Scientists, an environmental group consisting of citizens and scientists.

But government support can be withdrawn or can lapse.

The U.S. has been an up-and-down market and depends considerably on a federal tax credit.

The credit is the wind energy production tax credit. The PTC is 1.9 cents for each kilowatt-hour of electricity generated by wind turbines during the first 10 years of a wind farm’s operation. The credit has been described as a way to help level the playing field between companies generating electricity from wind power and those generating it from other sources, like gas, coal, oil and nuclear.

The PTC has existed since 1992, but it’s not permanent, so the federal government must decide from time to time whether to extend the expiration date. On several occasions, it has allowed the PTC to lapse.

Without the credit, demand in the U.S. market drops. The drops aren’t immediate--planning and installing a utility-scale wind farm takes time--but they are noticeable.

The U.S. market may be more stable through ’07. The federal government extended the PTC in mid-’05, months before it was due to expire and established a new expiration date: Dec.31, ’07. It was the first time the U.S. government avoided a lapse in the PTC.

After the credit was extended, the American Wind Energy Association said in a press release it "anticipates that strong growth momentum will continue in 2006 and 2007."

However, the government may not avoid lapses in the future. "If the government lets the PTC expire again, then that can have a negative impact on the market," Neidig says.

Gear manufacturers can serve the wind energy industry by making any of a range of parts and assemblies, from loose gearing to whole gearboxes.

ITAMCO wants to increase its business in the wind energy industry. "We’re in the process of getting into assembling complete drives for the wind turbines," Neidig says. To this end, ITAMCO purchased a former automotive plant in Argos, IN, and plans to employ 40 people in the 385,000-square-foot facility.

Hansen Transmissions manufactures complete wind turbine gearboxes and built a new factory dedicated to making them. According to Brems, the factory performs all the processes for manufacturing wind turbine gearboxes, including heat treatment of all the gears, except for one--the large internal ring gear: "The nitriding of the ring gears is the only process we outsource."

"We have spent $125 million dollars to build such a factory," Brems says. "On the one end, we bring in raw material, and on the other end, we ship out completely manufactured and tested wind turbine gearboxes."

However, wind turbine gears also have to be high quality. "Basically, all the gears get ground," Neidig adds. So gear quality is commonly Q12 or better under AGMA 2000-A88.

Size and quality aren’t the only concerns. "We have to meet very long design lifetimes, 20 years," Brems says. "You need very high reliability."

The industry has already developed 5-megawatt turbines. "It’s logical to assume these prototypes will be developed over the next years into serial production," Brems says, adding that turbines in the 6-8 megawatt range could be developed in the next five years. Larger turbine gearboxes present problems in terms of size, weight and quality. Gearbox manufacturers may be able to reduce size and weight by having turbines parts, such as the rotor bearing, integrated into the gearbox itself, Brems says. He predicts quality levels for today’s wind turbine gears should be sufficient for tomorrow’s, but he cautions: "Achieving those quality levels as gearboxes grow bigger will be a challenge."

Still, Neidig says: "This wind turbine business has probably been one of the best things for the gear industry in a long time."