The proposed topography combines advantages from both linear and parabolic tip relief. The evolution from linear to parabolic is discussed in terms of peak-to-peak transmission error. Anomalous contact conditions due to particular tip relief modifications are reported,and maps are obtained in order to find optimum tip relief by taking into account contact condition boundaries.

In a gear set, transmission error (TE) is defined as the difference between the effective and the ideal position of the output shaft with reference to the input shaft. The ideal position represents a condition of perfect meshing, without geometrical errors or distortions. TE can be expressed either by an angular displacement or, more conveniently, as a linear displacement measured along the line of action tangent to the base circle. TE is considered to be the primary cause of whining noise (Ref. 1). Indeed, whining noise is produced by changes of tooth load:
- Amplitude,
- Position along the profile,
- Direction.

These changes are consequences of tooth deflection, local contact deformation and body deformation, which are the origin of TE.

Several authors (Refs. 2-6) studied the correlation between TE and tip relief profile modification since it is a strong tool to modify TE by looking at fixed gear parameters. Niemann proposed long and short modifications (Ref. 4). The difference in denomination is based on the starting point of tip relief along the profile. According to experimental results, gears with long modifications show reduced TE excursion, indicated as peak-to-peak transmission error (PPTE), and therefore little noise level at the design torque.

At lower torque, this optimum condition was not verified, and an intermediate or short modification is suggested.

The type of function v = v(Θ) is usually indicated as profile modification topography. Meshing sensitivity to topography is explored throughout this article.

A different shape for the tip relief profile modification is proposed with the aim of reducing noise since TE can be significantly reduced if an optimized profile modification is produced (Refs. 1, 5, 3). Litvin (Ref. 7) agrees with this approach even though tooth contact analysis is considered only, instead of loaded tooth contact analysis (LTCA). This article shows how the new profile tip relief modification proposed here can influence TE meshing response, according to LTCA hypothesis.

Linear and parabolic topographies are the only shapes that have been deeply studied (Refs. 8-11). Considering recent grinding developments, it is possible to consider more complex shapes, in particular for spur gears in which profile modification is strategic (Ref. 12).

Parabolic profile modification satisfies tangent continuity condition even though sharp curvature changes is produced. Linear profile modification produces an edge instead. At the modification start point, discontinuity arises. Indeed, according to solid elastic contact mechanics, a sharp edge generates singular pressure when an angular point falls inside the contact region. Therefore this modification topography is considered to be more dangerous for contact pressure, which is the primary reason of micropitting activation (Refs. 13, 14).

The new topography proposed here is able to exploit both linear and parabolic topography properties since it is a linear relief with a parabolic fillet, as shown in Figure 2. The topography shown here has never been found by the authors in the technical literature.

Transmission error produced by the modification pattern of Figure 2 is shown in Figure 3, along with a fast fourier transform analysis of TE. In Figure 3(b), the mean value of the TE signal is eliminated, first frequency component is predominant, and it is remarkable that with higher load, PPTE and first frequency amplitude can be smaller than with lower load.

As discussed, PPTE can be effectively considered as the main parameter of TE roughness (Ref. 8).

The tool exploited to find the optimum tip relief configuration is a map plotting PPTE as a function of start relief roll angles ΘP and ΘG for fixed profile modification magnitudes at the top vP and vG.

The methodology proposed by the authors (Ref. 8) is applied here.

Simulations of meshing gears have been carried out by means of a hybrid method, combining the finite element technique with a semi-analytical solution (Refs. 15, 16).

The main assumptions for the analysis are the following:
- Plain strain conditions suggested by the spur gear geometry (high ratio b/h). Two-dimensional plane strain analysis is adequate for this kind of tooth. Moreover, the two-dimensional version of the software requires little time both for model generation and simulations, with very precise results.
- Static analysis.Static TE was determined while neglecting rotational speed and inertia forces. This is the main assumption; undertaking dynamic analysis is too time consuming.
- Friction neglected. It is assumed that it has little effect on TE output.
- Space error and pitch error not considered. No statistical consideration was included in the analysis.

Corner contact boundary. Corner contact is produced when the contact region includes zones of the fillet of the tooth tip (Ref. 17). As a consequence of tooth deflection,the effective contact ratio is greater than that found according to rigid geometry. Hypothesis: The contact pressure rises locally at the tip fillet, as shown in Figure 4.

This definition of corner contact can be exploited if an FEM analysis is performed. When the corner contact is detected, the calculated pressure peak was not considered reliable since the maximum is strongly affected by the radius of the fillet, which is a very unpredictable quantity.

High curvature boundary. There is also the possibility of getting an anomalous contact condition if the tip relief is too high along the tooth profile. In this condition,high curvature occurs and then contact pressure is expected to be much higher than the Hertz model according to the nominal involute curvature.

In Figure 5, three contact pressure histories are shown in which only linear-parabolic profile modification parameters are modified. 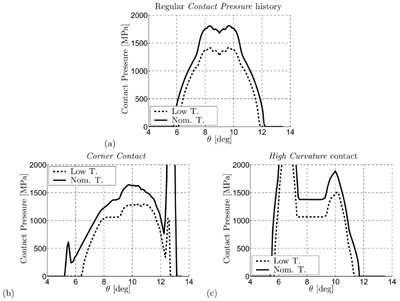 For each case, two load conditions (nominal and low load) are shown in comparison. It is worth noting that corner contact is related to torque versus tip relief, so configuration can show corner contact if the load is high enough. This is obviously detectable only if loaded tooth contact analysis (LTCA) is considered.

This paper’s main result is to obtain PPTE maps in order to find the minimum inside an acceptance domain defined according to contact pressure. Maps hereafter presented plot PPTE as a function of tip relief start roll angles (ΘP, ΘG), which are strongly PPTE-dependent parameters, for a given quantity of material removed at the top (vP, vG). Initial values of vP and vG have to be related to the nominal torque of the gear set even though they are also strongly PPTE-dependent (Refs. 8-11).

To define completely the linear-parabolic modification (ΘP, ΘG) and (vP, vG) is not enough; the transition from parabolic to linear point roll angles needs to be defined (ΘpP, ΘpG) (see Figure 2(a)).

It is clear that:

To let the transition from linear to parabolic be described in natural fashion,configurations at fixed ratios are considered in singular maps.

Limit configurations are λP(G) = 0 (linear modification) and λP(G) = 1 (parabolic modification). Maps with λ ranging from 0 up to 1 are reported hereafter.

The aforementioned methodology was applied to a low contact ratio (LCR) gear set. The main parameters of the set are reported in Table 1.

For the equal number of the set, several symmetry properties are expected. Configurations analyzed are reported in Table 2.

For nominal torque, the effect on PPTE of the migration from linear to parabolic topography is depicted in Figure 6. 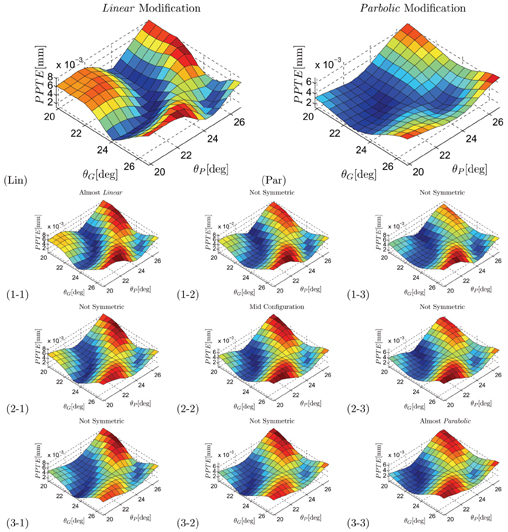 Furthermore, boundaries were applied. Results are reported only for symmetric configurations in Figure 7. 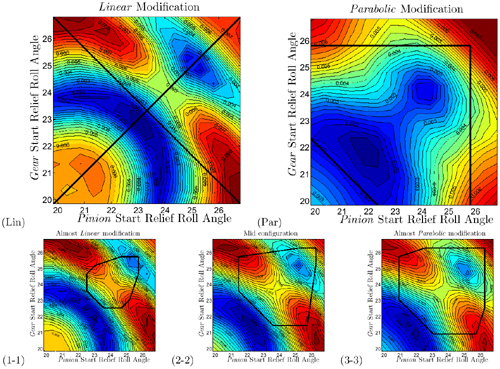 When searching the minimum inside boundary, it is clear that parabolic modification is the one that offers a wider acceptance domain. Therefore, larger areas in which PPTE produces an absolute minimum can be considered. Minimum values for configurations shown in Figure 7 are reported in Table 3, not considering boundaries.

For low torque, the migration from linear to parabolic topography is depicted in Figure 9. For this load level, no boundary related to contact pressure was applied since load is not expected to be dangerous at this level. Even though there are also necessary conditions of anomalous contact (edge contact or high curvature) at lower load, it is possible to assume that they are confined to useless configurations. Minimum values found at the different configurations are reported in Table 4. 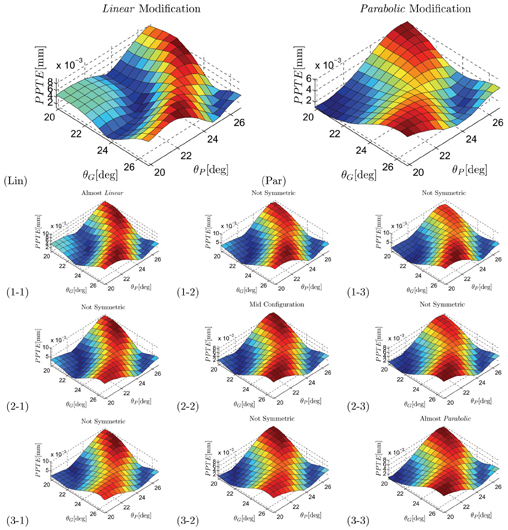 It is worth noting that neither linear nor parabolic topography generates minimum PPTE at both loads.

In the configuration proposed here, minimum PPTE output is generated by a linear with parabolic fillet configuration. However, the optimum is dependent on the load. Therefore, the aim of this article is not to propose this result as a "golden" rule, but to show that the parabolic fillet can be an effective parameter for obtaining an optimum solution.

In order to avoid a huge amount of graphical output, sensitivity to center distance offset is considered for linear modification at nominal load. Results are shown in Figure 10. 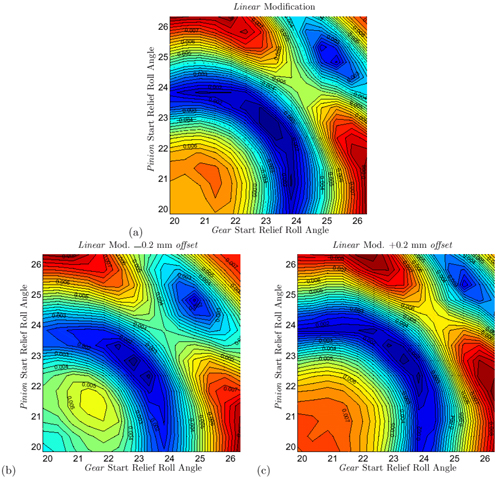 The entities of offset are around ±0.2 mm. In comparison with modulus, it is clear that perturbations induced by the meshing condition have an influence on the PPTE map.

In this article, a new tip relief profile modification is proposed along with loaded tooth contact analysis methodology. Static peak-to-peak transmission error is considered as the main meshing output since it can be related to noise level. Extensive parametric numerical analysis results are presented. PPTE maps are reported as a function of pinion and gear start of tip relief roll angles. Migration from linear to parabolic modification is effectively described.

Contact pressure anomalies are presented and applied as limits of acceptance on PPTE maps. Modifications that are close to parabolic can show a wider acceptance domain, since edge contact and strong curvature issues are less dangerous.

The optimum configuration is found here for a gear set at a given load. The new topography introduces a degree of freedom that can be useful in designing optimum profile modifications for any gear set.

The authors are grateful to Dr. Sandeep M. Vijayakar, head of ANSol, for his large support to the development of the work.

Ciro Santus is assistant professor in the department of mechanics at the University of Pisa in Pisa, Italy. Currently, he is researching various aspects of machine design.Santus has worked extensively in FEM simulation in gears and contact mechanics. He has an advanced degree in mechanical engineering and a Ph.D. in metal fatigue related to oil drilling technology.

Marco Beghini is a professor in the mechanical department at the University of Pisa. He has twenty years’ experience in material and mechanical component analysis and design as well as several years’ collaboration with Avio SpA in testing, analysis and design of gear transmissions for aeronautical applications.