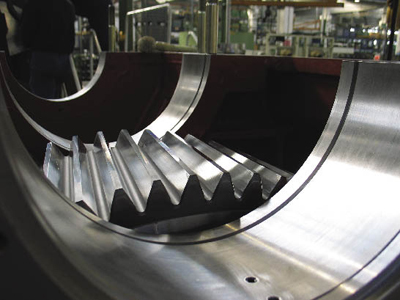 A gearbox that absorbs 30 percent of external forces, transmits power from two engines operating at different speeds, and uses gears that meet several design and specification standards at the same time.

Many gear manufacturers would wrinkle their brows at this unusual box. But what’s odd to them would be ordinary to marine gear manufacturers. The above features are commonplace in high performance marine gears and their boxes, which are used in vessels as wide ranging as luxury yachts, fast ferry boats, frigates and workboats.

Given these features, marine gear manufacturers often have to create gearboxes that are much more compli-cated than their non-marine counterparts.

Connected to Multiple Engines
Whether a luxury yacht or a massive warship, many larger marine vessels have two or more engines and use certain ones based on whether they’re in a small harbor or on the open sea. This situation, multiple sources of power, contrasts starkly with non-marine gearboxes.

“Normally, you have just one input for non-marine gears,” says Franz Hoppe, general manager–marine for Renk AG. Hoppe estimates that more than 90 percent of non-marine gears have only one input.

In a larger marine vessel, the multiple inputs may be gas turbines, electric motors or diesel engines. Depending on the combination, the power sources often operate at different speeds, so they require gear trains with different reduction ratios.

The trains are usually combined inside a gearbox, with one train for the primary engine and one for the secondary. Further complicating the box’s design is that both trains may be connected to one or more output shafts. Also, the gear trains can overlap; they can share gears.

The different engines are necessary because a ship operates in different environments and speed modes: loiter, cruise and fast. In a harbor, the frigate has to move slowly, carefully. Its speed engine, the gas turbine, isn’t suitable, so it switches to its lower-power diesel engines.

To do that, the crew may also need to switch from one gear train to another. This switch involves activating and deactivating various clutches in the gear system, in a certain sequence, disengaging some gears and engaging others so the box achieves the right reduction ratio between the online engine and the propeller.

Marine gearboxes connected to two or more engines include commercial vessels, like ferries and other roll-on, roll-off ships. Also, high-speed yachts can feature two gas turbines with power output via waterjets, not propellers. Waterjets allow for much more condensed output of the engines’ power.

No Infinitely Stiff Foundation
Marine gear manufacturers also have to keep in mind that their gears and boxes will lack what are considered infinitely stiff foundations. The problem isn’t the gears, their box, its immediate base, or the ship itself. The problem is the water. It’s not stiff. Even when calm and in a sheltered harbor, water isn’t a road or a rigid, stationary platform.

Still, gear mesh mustn’t be affected by even rough waters.

“Stiffness is most important to have reliable tooth contact between the gears,” Hoppe says.

That reliable contact is no small feat given that a characteristic of high performance marine gears is their mechanical efficiency. At ZF Friedrichshafen AG, Gerald Rowe, R&D manager–marine transmissions, puts that efficiency at 99 percent tooth contact between pinion and bull gear.

To keep gears in mesh, their casings are strengthened with ribs or built with a double-wall design. “The casing has to be as stiff as possible, always,” says André Thuswaldner, chief design engineer for Maag Gear AG. Thuswaldner is responsible for the initial design of his company’s marine gears. 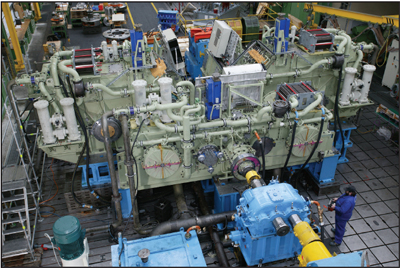 A Complex Gearbox--The combined marine gearbox here, a CODAG, can simultaneously transmit power from a diesel engine and a gas turbine or can transmit power from one or the other separately. Such complicated gearboxes are common among many larger marine vessels. Photo courtesy of Renk AG.

What is a High Performance Marine Gear?
The answer is more elusive than might be expected because physical, performance and other characteristics vary considerably. A high performance marine gear’s size can range from 300 mm to 5 meters. Also, marine gears can transmit as little as 225 kilowatts of power and still be considered high performance.

The other end of the power range is more open. Tom Wampler, chief engineer–marine design for Twin Disc Inc., says high performance marine gears’ maximum power can reach “astronomical numbers.” Renk’s Hoppe provides a maximum—50,000 kilowatts—but he adds the upper end can go as high as a customer needs: “We are not limited on the upper side.”

Accounting for power and speed, Thuswaldner defines a high performance marine gearbox as having a power/weight ratio of more than 1.5 kilowatts/kilogram or operating at a pitch-line velocity of at least 120 meters per second.

Another characteristic is high reliability. Hoppe defines that as: “Never having a gear tooth or bearing failure.” At Maag, Christoph Blättler, general manager for sales–marine gear units, is number-specific. He says naval gears have to be designed for 99.95 percent reliability, with the overall gearbox having a reliability of 99.8 or 99.9 percent.

The need to avoid tooth failure is critical, especially with larger ships. If the gears are in motion, the vessel is likely under way. If a tooth fails then, the ship isn’t in charge of its movement anymore, the water is.

The problem is serious when it occurs on the open sea, like in the middle of the Atlantic Ocean. In that case, the ship would need to be towed into port. But it’s more serious if the vessel is maneuvering in harbor. A tooth failure then and the vessel could collide with nearby ships, damaging them and maybe killing people.

Given these consequences, marine gear manufacturers are very much concerned with avoiding gear failure, whether due to the gears themselves or due to external forces.


Marine gearboxes must be able to resist external forces, like those introduced into the box’s foundation from the surrounding structure or vibrational forces from the propeller and propeller shaft. To an extent, resisting external forces means being able to absorb them.

Without the extra amount, the gearbox’s bearing assembly could overload, disrupting the oil film, which would immediately damage the bearing, causing the gears to stop. At that point, the vessel wouldn’t be propelling itself; the water would be.

Besides natural external forces, some vessels—naval vessels—have to be built to handle shock forces from man-made objects. Think large ammunition, like torpedoes. Hoppe says shock forces can be up to 50 g (500 meters/second2). “These are very high acceleration forces.” 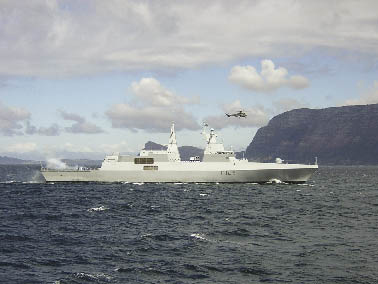 An Unstable Foundation--A marine gearbox has to be designed and manufactured to compensate for the lack of stiffness in what is—in the ultimate sense—its true platform: water. Photo courtesy of Renk AG.

Designed to Fit Space
Less unusual than being built for extreme external forces, marine gears, like other gears, have to be designed to fit in a limited space with a predetermined shape and still provide all their required performance.

“That is the challenge for the design engineer when it comes to marine gears,” Thuswaldner says. He adds that the space can sometimes require making the gearbox more complicated than it would otherwise have to be: “But that’s life in marine gearboxes.”

As an example, Thuswaldner com-pares a marine gearbox for a gas turbine capable of generating 22 megawatts of power at 330 rpm and an industrial gearbox capable of the same output but built for a mill drive. The boxes’ lengths and heights would be the same but the industrial gearbox would be more than 50 percent wider than the marine one.

The marine box would have 16 gears, an input shaft and an output one. The industrial box would consist of four gears and three shafts: an input, an intermediate, and an output. “That makes the gearbox very simple and very cheap, but heavy,” Thuswaldner says.

The heaviness would be a main problem and a major reason for a planetary gear design. Weight matters, after all, in terms of a vessel’s fuel consumption and handling characteristics. The planetary gear design’s overall effect would be to allow the marine gearbox to be smaller and weigh less.

Built to Meet Multiple Standards
Whatever the gear arrangement, though, high performance marine gears often have to be manufactured to meet several standards simultaneously.

This situation can occur, for example, if a prospective owner isn’t sure in what country he’ll register the ship he’s having built. The country matters because each one may have its own design and specification standards for marine vessels, and all ships registered with that country must meet those standards, which are administered by classification societies. In the United States, the society is the American Bureau of Shipping, known as ABS. In Italy, it’s the Registro Italiano Navale, RINA.

“Each society has its own methods for calculating gears,” says Rowe of ZF. He adds that calculation results can vary as much as 65 percent from society to society.

Knowing the various standards is also necessary when a company makes marine gears for customers from many different countries. In either case, when the marine gear manufacturer doesn’t know which classification rules may be applied, it designs its transmissions to account for all possibilities.

Having to meet several standards at one time, to design for different power sources in one gearbox, and to compensate for the lack of a stiff foundation—these considerations increase the complexity of designing and manufacturing high performance marine gears and gearboxes, especially when they’re used in vessels as diverse as coastal workboats, luxury yachts and oceangoing warships.

As Twin Disc’s Wampler says: “There’s no such thing as a run-of-the-mill, suits-all-things marine gear.”


Comment on this article by sending e-mail to publisher@geartechnology.com