Home » It's All About the Science at Gear Research Institute

It's All About the Science at Gear Research Institute

Experience counts, shared or otherwise, in most anything we do. But it sometimes falls short when trying to establish consistent gear design and standards definitions. That is why—despite racking up more than $2.5 million in R&D contracts this year with its member sponsors—the Gear Research Institute at Pennsylvania State University is not content. And Dr. Suren Rao, institute managing director, pulls no punches in explaining why. 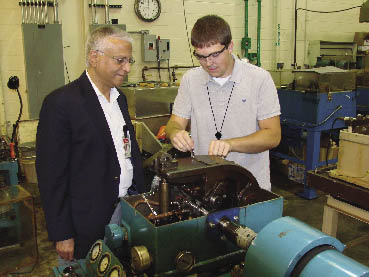 “It is my opinion that too much of gear design and definition of standards is anecdotal, he says. “While analytical methods have been developed to establish a ‘better’ theoretical basis for these efforts, it has to go hand-in-hand with rigorous and robust experimental verification. The institute, in conjunction with the (school’s Drivetrain Technology) Center, has the most comprehensive gear test capability in the nation. It can play a leading role in this experimental verification.”

Asked to expand on those observations, Rao refers to how standards are typically arrived at, and two inherent disadvantages with that process.

“Right now, AGMA is writing standards in committees that bring together experts in their respective fields who bring their practices to the table and define a consensus that is acceptable to the group. This is purely experience-based, and while I have no quarrel with this process, it has two disadvantages. One, while experience is a great teacher, it is less able to define technological advances, both in terms of what, and when. Two, it also trends to the conservative side, as no one wants to be ‘out on a limb.’”

Rao allows that the points he makes were less valid when the United States and Western Europe ruled a much smaller industrial universe. But he cautions that the advances of Asian and other emerging Third World countries are dictating the need for a new playbook.

“Both of these issues were irrelevant when we were ‘king of the hill,’” he says. “Today, we face a host of competitors that are willing to take risks that we are not bold enough to do, and are losing the game as a result.”

“The only addition I would make to this process is devising experimental verification of the proposed standards to make sure we are not going overboard on the cautious side, and that we are exploiting the benefits of advanced technology. To implement this will cost money—money that needs to be justified to management.”

An independent, not-for-profit corporation formally begun in 1986 by a group of Chicago area-based gear engineers, GRI then made its home at Northwestern University around 1994 before eventually establishing a permanent base at Penn State. The institute co-sponsors projects with the university’s aforementioned Drivetrain Technology Center, a division of its Applied Research Laboratory. From its inception, the institute has made its mark in the industry by conducting collaborative, pre-competitive gear and applied research.

Asked to define “pre-competitive,” Rao explains the distinction between the institute’s work and that generally conducted in academic environments.

“In the academic environment, we generally characterize it as research which is publishable without any restrictions. At the institute, we follow a narrower concept. And the basis is research that several companies can jointly conduct without impacting their competitive advantage.”

The institute boasts an “A” list of top companies with which it has partnered on gear research. Rao cites the institute’s efforts in developing gear design allowables for AMS 6308 gear steel with a consortium including Avio (Italy), Boeing, Honeywell, Pratt &Whitney, Purdy Corp., Rolls-Royce, REM Chemicals, Sikorsky Aircraft and Timken. Rao also alludes to ongoing single-client projects sponsored by Rolls-Royce in support of the Joint Strike Fighter program, and to just-completed work for Boeing-Mesa evaluating the durability characteristics of several gear steels for Apache aircraft.

Rao explains how this concept played out in a recent aircraft project.

“The AMS 6308 Gear Design Allowables project is a typical example. All aircraft gearboxes are being designed with high hot hardness steels, such as AMS 6308. All of them need the material failure data. 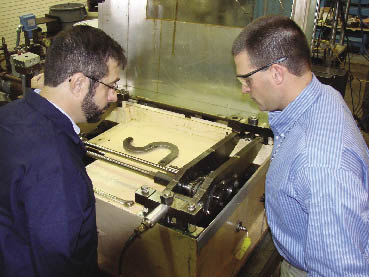 The institute is overseen by a tri-partite, nine-member board of trustees. Three members are nominated by the American Gear Manufacturers Association (AGMA), three by the American Society of Mechanical Engineers (ASME), and three are elected by the institute’s membership for a three-year term. The board elects a president—currently Bill Bradley of the AGMA; treasurer—Al Swiglo of Northern Illinois University; and a secretary—Sam Haines of Gear Motions.

Rao, completing his 10th year at the institute, (succeeding institute co-founder Dale Breen of International Harvester), is of course a firm believer in the institute and the work it does. For him, it’s all about the science and protocols.

In addition to its corporate sponsors, the institute is also supported by nominal membership fees—$300 corporate, $50 individual and $10 for students. In return, members are welcomed to the institute’s annual meeting and are able to access the institute’s database to research past projects—contingent upon approval by the sponsoring entity—at reasonable cost. Members also receive mailings regarding institute workshops and symposiums which they can attend at a reduced rate.

In breaking down FY ’06 (Oct., ’05–Sept. ’06) projects, Rao cited Rolls-Royce, Boeing, Distortion Control Technologies and LSP, Inc. as companies that combined sponsored more than one million dollars in institute projects. That work, along with that of the other companies previously mentioned, allowed the institute to repay its original 1986 founding grant provided by the ASME. In addition, another $1.5 million was realized from the aircraft-related work done at the affiliated Drivetrain Center. But, an unfortunate sign of the times, the U.S. automotive sector this year sponsored less than $100,000 for research by the institute. Too, GRI has attracted no interest or sponsorships from foreign automakers. Back on the plus side, Rao says possible programs with Boeing and Northrup Grumman Marine bode well for 2007.

To perform this work, the Gear Research Institute is empowered with an array of research capabilities, including rolling contact fatigue (RCF) testers for low- and high-temperature roller testing; modifiable power circulating (PC) gear testers for parallel axis gears with a 4" center distance; single-tooth fatigue (STF) testers for spur and helical gears; a gear tooth impact tester; and worm gear testers with 1.75" and 4" center distances. Metallurgical characterization facilities are also made available by Penn State to the institute.

Along with its research capabilities, the institute prides itself on its efforts—necessarily limited though they are—in educating and nurturing students seeking a career in gear design and related technologies. And yet, despite the shortage of upcoming wannabe gear engineers, the institute finds itself in a “Catch-22” dilemma, given the constraints and limited dollars they must work with.

“While there are plenty of students looking for work in my laboratory, funding them is always a challenge,” says Rao. “Most of the industrial contracts have very tight intellectual property rights (IP) that, in most cases, preclude their publication as a thesis.”

For Rao, and the gear industry in general, support for gear engineers of the future is a major concern with no apparent solution.

“While educating the next generation of gear engineers is a purpose we would like to fulfill, I have a very difficult time doing just that. Educating gear engineers is a major concern. If funding and IP rights were less stringent, education of students in gear technology would not be a problem.”