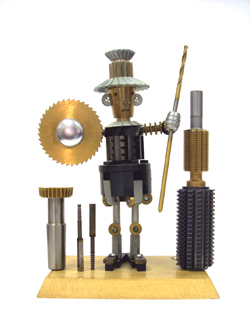 While the rest of the exhibitors were selling machinery, the Addendum team scoured the floor of Gear Expo in a quest to find the quirky things at the show.

It didn’t take long. Barit International Corp.’s booth had the usual assortment of cutting tools, but it was Toolman that was the center of attention.

Toolman watched the activity at the expo from a prime tabletop position at Barit’s booth. Visitors were lured in by the mascot’s body, which includes hobs, cutting tools, carbide inserts, tapers, a drill, and milling cutters.

Leon Kozlov, Barit’s vice president, says Toolman was a gift from a Russian supplier. Although Barit no longer sells Russian-made tools, Toolman has been a constant in the company’s office for 15 years.

On its rare trips outside of the company’s Northbrook, IL, headquarters, Toolman mingles with the gear industry. He’s been at more Gear Expos than many of the sales reps on the show floor.

Schmoozing at the expo is all well and good, but can he be rented out for booth breakdown duty? No job is too big for Toolman!