Management Summary
An experimental effort has been conducted on an aerospace-quality helical gear train to investigate the thermal behavior of the gear system. Test results from the parametric studies and the superfinishing process are presented. The tests indicated that superfinishing offered no improvement in performance due to the high lubricant film thickness generated by the extremely high pitch line velocity at which the majority of the tests were conducted. Increasing lubricant inlet temperature had the most dramatic effect on performance improvement.

Introduction
High-speed, heavily loaded and lightweight gearing components are found in propulsion systems for rotorcraft. The high pitch-line velocity that is part of these systems makes the thermal aspects of the gear system design very important. Also, transmission systems used in certain applications have gear trains that provide the proper spacing between the parallel engine and rotor shafts (Ref. 1). These gear trains can cause additional thermal problems as the idler gears in this system receive two meshing cycles (on opposite sides of the gear teeth) per revolution. Therefore, weight-optimized aerospace drive system components can have difficulty when operation includes primary lubrication system failure.

In prior studies using this gear train system, testing has focused on basic operational characteristics (Refs. 2 and 3), as well as on the comparison of analytical predictions to experimental results (Ref. 4). The results from these studies have shown and quantified the effect of operational conditions on the power required to rotate the gear system at high speed and load. Also, gear windage was shown to be one of the primary gear mesh losses and is the least understood of the gearing loss mechanisms (Refs. 5 and 6). At the present time, gear windage reduction techniques have been trial-and-error. However, there is a performance benefit that can be realized if the design engineers can come up with an effective system to reduce these losses.

The objective of this study was to investigate the effect of lubricant input temperature and additional gear surface treatment beyond the baseline finish ground surface on performance parameters measured in the test facility. The baseline gears used in prior test programs were removed from the test facility and had the superfinishing process applied. The inlet temperature of the lubricant was varied from 160 to 250°F. Tests were conducted at these various operating conditions (including the inlet temperature) in the as-ground (including run-in) and with superfinishing applied. The superfinishing process has been shown to be very useful in contact fatigue life improvement (Refs. 7 and 8). This process has also been shown in other studies to reduce power loss and scoring loads when applied to the gear flanks.

Test Facility, Test Instrumentation and Test Hardware
Test Facility. The test facility used for this study is shown in Figure 1. The facility is a closed-loop, torque-regenerative testing system. There is a test gearbox and slave gearbox that are basically mirror images. Each gearbox has an input gear, three idlers and one bull gear. The gearboxes are joined together through the input gears and bull gears via shafting. 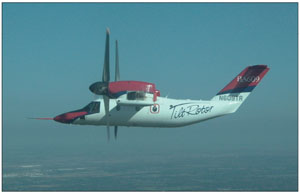 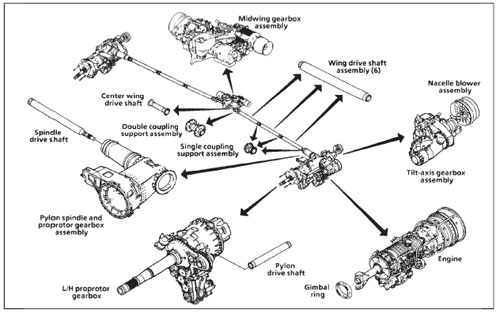 Each gearbox has separate oil supply, and scavenge pumps and reservoirs. All flow rates have been calibrated at various temperatures and pressures prior to installation for accurate flow rate measurement. Lubrication system flow rate is controlled using the supply pressure. Temperature is controlled via immersion heaters in the reservoir and heat exchangers that cool the lubricant returned from the gearboxes. Each lubrication system has very fine 3-micron filtration. Nominal flow rate into the test or slave gearboxes at 80 psi is approximately 15 gpm. 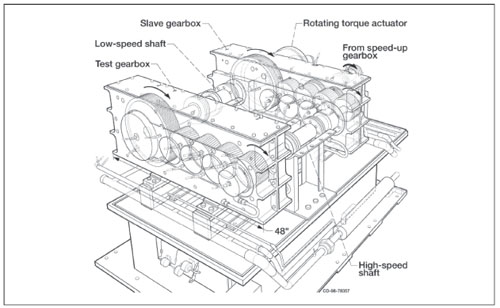 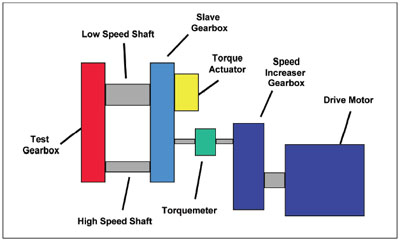 Figure 4—Photograph of thermocouple rake used in these tests. 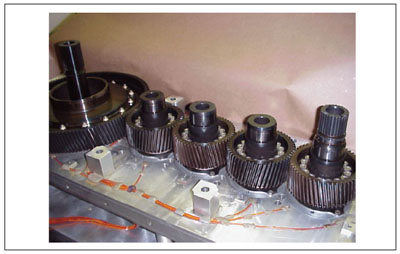 Figure 5—Photograph of thermocouple array used in these tests.

Test Hardware. The test hardware used in the tests to be described is aerospace-quality hardware. The basic gear design information is contained in Table 1. The input and bull gear shafts have a combination of roller bearings with ball bearings to contain the resultant thrust loads, whereas the idler gears only have roller bearings. The partially disassembled test gearbox is shown in Figure 6. The bearing inner race is integral to the shafts on the idler gears and at other radially loaded bearings on the input and bull gear shafts. Shrouds for the gears were used to minimize the windage losses. Figure 7 shows the shrouds installed in the test gearbox. 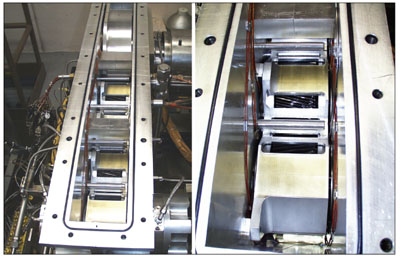 Figure 6—Baseline gear train installed in half of the test gearbox. 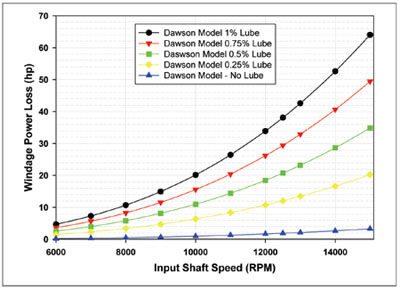 The gears shown in Figure 6 were the as-ground components. The gears were subsequently superfinished and reinstalled in the test gearbox. These gears are shown for the entire gear train in Figure 8 and a close-up in Figure 9. 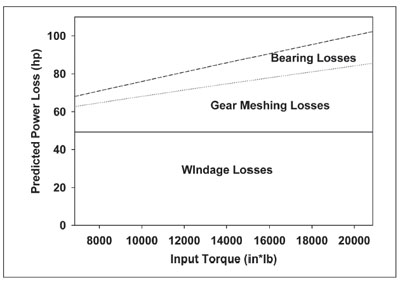 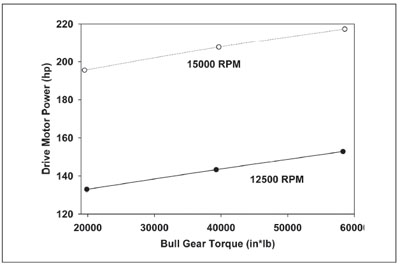 Figure 9—Close-up of a superfinished gear.

Data Acquisition. The test facility data system monitors three important facility parameters during operation. Speed, torque (supplied torque and loop torque) and temperature measurements were made during all the testing conducted. The test system loop torque is measured on the shaft connecting the bull gears from the test and slave gearboxes. A telemetry system was utilized in this location.

The data recording system used in this study is capable of taking data from all parameters at a rate of one sample per second. Tests in this study recorded data every two seconds. The data is displayed to the test operator in real time. Data is stored in a spreadsheet format, and each sensor can be viewed at any time during a test and when post processing the results.

Test Operation. The test procedure for collecting the data to be presented was the following: For a given set of conditions (speed, torque, lubricant pressure and lubricant oil inlet temperature), the facility was operated for at least five minutes, or until the temperatures of interest had stabilized (or reached steady state).

Experimental Results. Tests were conducted and operational conditions maintained at steady-state conditions. As mentioned, the primary data from the testing include temperatures, speed and torque. The following data will be presented as the subject of this paper: temperature measurement location versus typical operational conditions; lubricant jet pressure (or flow); lubricant inlet temperature effects; and a comparison of the baseline to superfinished gears.

The first set of results is presented as an example of the large amount of data taken throughout this study. The test shown in Figure 10 was attained for the superfinished gears, keeping the lubricant inlet temperature and pressure constant. In Figure 10, the array (thermocouple #5) and rake (thermocouple #3) mid-temperature locations are shown for seven conditions of this particular test. The seven conditions included a warm-up; then three conditions of torque at 12,500 rpm; and finally the speed was increased to 15,000 rpm and the three torque conditions repeated. The test operational conditions can be found in Table 2 with a summary of some of the other data of interest. In this figure, typical for this gear system, the array temperatures were always much higher than the corresponding rake temperatures at the same location. As shown in this figure, the maximum temperature over the inlet lubricant temperature was on the order of 180°F. 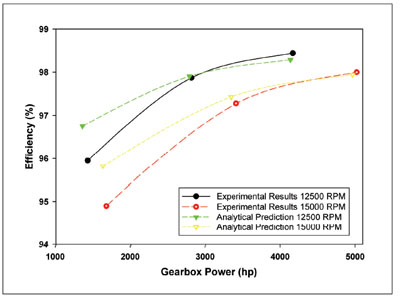 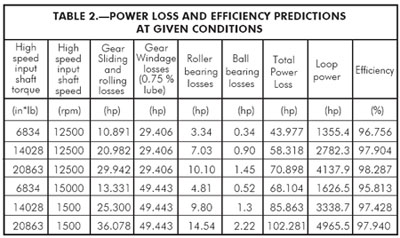 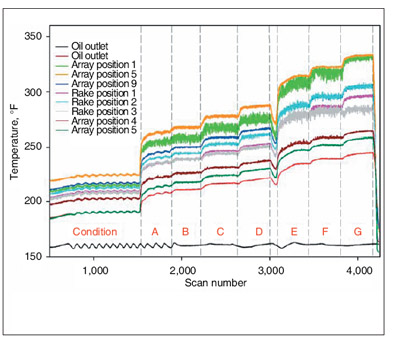 Another test that was performed was to vary the lubricant jet pressure from the nominal 80 psig to two lower settings. This data is shown in Figure 12. In this figure, the as-ground and superfinished data are plotted for 33% of the maximum load and at two input rpm speeds. The results from either case were nearly the same, with a very slight reduction in power loss due to a reduction in the lubricant pressure from 80 to 60 psig. 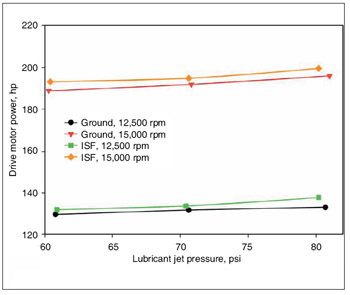 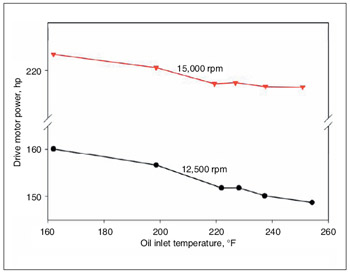 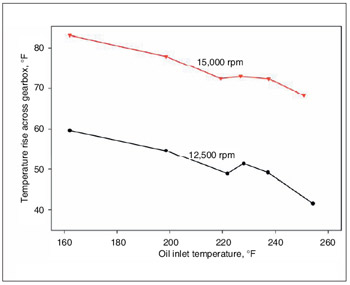 The last comparison to be made between the as-ground and superfinished gears will be made in Figure 15. The data provided in this figure show the drive motor power to rotate the test rig at two different speeds (12,500 and 15,000 rpm) and three different bull gear torques (~33, 67 and 100%). A linear behavior is shown with increasing load at constant speed. From this figure it can be concluded that improving the surface finish of these components had no efficiency benefits, as the data were nearly identical. 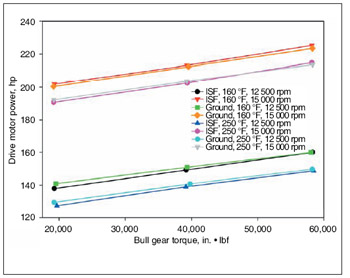 Discussion of Results. The question raised when reviewing the results of this study is “Why didn’t superfinishing improve the performance of this high-speed gear mesh?” To determine why no benefit was found, an analysis of the input –1st idler gear mesh was made to determine the lambda ratio (lubricant film thickness/composite surface roughness of the meshing gears). For the analysis, the bulk temperature (gear and lubricant) was assumed to be 230°F. In Figures 16 and 17, the results of the analysis are shown. In Figure 16, the input shaft speed is held constant at 15,000 rpm and the surface roughness and input torque are varied. Only for the case where the surface roughness is <12 µin. would there be a lambda ratio >1. In Figure 17, the torque was held constant at 100%, and the surface roughness and input shaft speed were varied. In this case, the lambda ratio could be reduced below one for all conditions if the shaft speed was reduced to a low enough level at the full power condition. Therefore, superfinishing of the parts did not take a system that was in the mixed elasto­hydrodynamic condition and move it to the fully flooded condition where the lambda ratio is <1. In most of the tests in this study, for both as-ground and superfinished tooth surface conditions, the lambda ratio was two or greater. 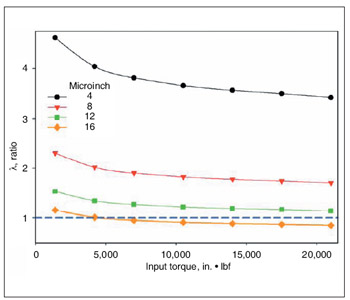 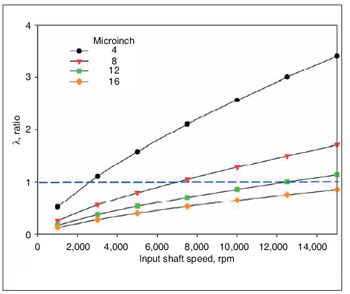 Conclusions
For the results attained, the following conclusions can be made:

1. Superfinishing provided no measurable performance benefit to the high-speed gearing system under study. The film thickness to composite surface roughness was two or greater for most of the tests conducted.

2. Increasing lubricant inlet temperature provided the most beneficial effect to the performance of the drive system.

3. Thermocouple rakes and arrays installed in the test gearbox provided data that the fling-off temperatures vary with location across the face width of the gears, as well as the location within the gearbox where the temperatures were measured. The idler-idler gear meshes typically produced the highest rake and array temperatures measured in all tests.

4. The change in flow rate (due to lowering the lubricating jet pressure from 80 to 60 psig) had only a very minor effect on power loss.

Dr. Robert F. Handschuh has since 1982 been an aerospace engineer in the U.S. Army Research Laboratory, vehicle technology directorate, at the NASA Glenn Research Center in Cleveland. From 1984 to date, he has applied his expertise to power transmission, with a focus on experimental and analytical studies of planetary, spiral-bevel, face and high-speed gearing. The author of well over 100 technical papers, he holds a patent on a gas turbine engine shroud seal, and two patents on gas turbine bearing coking and minimization removal. An ASME fellow, he also serves on its power transmission and gearing committee.

R. Ehinger is a senior engineer in the drive system design group, and has been with Bell Helicopter-Textron since 2004. He received his bachelor’s degree in mechanical engineering from Texas A&M University in 2003 while working summers as a draftsman and machinist for the oil industry. In addition, Mr. Ehinger is working on a master’s degree in engineering management at Southern Methodist University. As project area lead for drive system research, he is responsible for the strategic planning and development of technology in areas such as materials, lubrication, configuration, efficiency and manufacturing. He is author of the AHS paper “Evaluation of Isotropic Superfinishing on a Bell Helicopter Model 427 Main Rotor Gearbox,” and is co-author of “Application and Configuration Issues of Resin Transfer Molded Composite Transmission Housings—A Program Overview.”