Management Summary
DSM Engineering Plastics is a producer of nylon plastic materials used for gear manufacture. In the past two years, the company has been conducting fatigue tests on actual molded gears in order to provide design data. The experiment used spur gears that are fully lubricated and temperature-controlled. Testing for the materials has been done at DSM Research, while the gear tests are being conducted at the University of Berlin. The purpose of the testing is to see if there is a good correlation between fatigue data generated on test bars vs. the actual fatigue performance in a gear.

In order to do this, the theories of gear calculations to get root stresses were also examined. Advanced finite analysis (FEA) showed that there are corrections needed to account for high loading or high temperatures in plastic gears, which corroborates other work within the industry.

With proper corrections to get accurate root stresses, there can be shown good correlation between tensile bar fatigue and actual spur gear fatigue.

Also, high crystalline nylon has been found which is an excellent material for gears in demanding applications, and can withstand both high torques and high operating temperatures.

Introduction
Plastic gears are more common than ever, and are now seen in the home, office, automobile and elsewhere. They have gained acceptance due to manufacturing methods such as injection molding, which produces economical, yet very reproducible gears. Noise re­duction and corrosion resistance are also reasons why plastic gears are used. Plastic gears are now not only used for light-loaded applications such as printers and toys, but for highly loaded or elevated-temperature environments such as automotive starter gears, turbo actuators, electronic throttle control, etc.

With these higher demands, it would be desirable to have increased predictive ability, especially with regard to long-term endurance capability. To this end, a study was done to look at fatigue on actual plastic gears and relate that to tensile bar fatigue. Tensile fatigue is quicker and easier to generate. The materials suppliers usually have this data readily available. It is also independent of geometry, as the stress on tensile specimens is simply the load divided by the cross sectional area. The goal is to have a method where root stresses could be calcu­lated and compared to the available tensile fatigue for prediction of gear life.

Critical to this predictive capability are the methods for calculation of gear tooth root bending stress. FEA and semi-analytic methods (e.g. ISO standards, KISSsoft) must be compared and validated for use in heavily loaded or high-tem­perature plastic gears.

Methods
The portion of the fatigue study that is on the actual plastic gears was conducted at the University of Berlin, while the tensile bar fatigue was performed at DSM Engineering Plastics in Geleen, the Netherlands. The gear test parameters were selected to minimize wear and thus isolate the fail­ure mode in the gear to true fatigue. The test rig is a 2 closed-loop (4-square) tester with dip lubrication. The oil lubrication is maintained at 140°C. This is a typical automotive, under-hood temperature, and motor oil was utilized as the lubricant. The gears are spur, with the driver being steel and the driven plas­tic. They are both module of 2, face width of 12 mm, with a 20 degree pressure angle. A standard profile according to DIN 867 was used.

The FEA was conducted on the same gear pair using a commercially available software package, MSC.MARC. The gears were modeled as two discs with four teeth each, under plain strain conditions. 80,000 first-order quads were used, with mesh re­finements in the tooth and at the surfaces in order to also capture contact stresses (Figs. 1, 2 and 3). Linear elastic modeling was used for the initial runs. 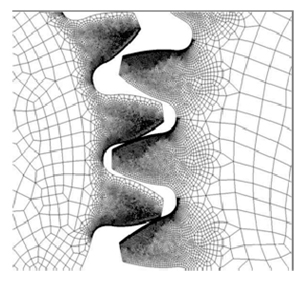 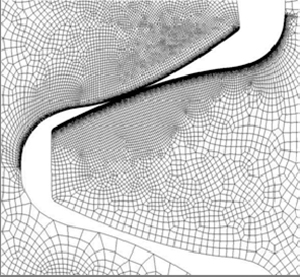 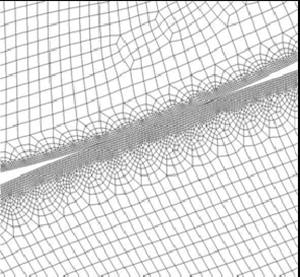 Results
Calculations. In general, contact ratios of two spur gears are in the range of one to two. This means that in part of the mesh­ing cycle, one tooth will carry the entire transmitted torque load. The classic theory shows this as 1/3-2/3-3/3 rule. That is, at first contact, the tooth carries 1/3 of the load and increases its share steadily to 2/3 until the preceding tooth leaves the mesh, and it then carries the entire load for a short period before symmetrically reversing this load cycle. Our FEA shows this to be more like 2/5-3/5-5/5 for a steel gear pair, with a modulus of 206 GPa. This is reinforced in other literature also.

When we introduce a plastic driven gear with a steel driver gear, the load sharing is quite different than the theory in that the curve skews to later in the rotation. The share follows 1/3 in the first part of rotation, and 2/3 in the second part of rotation through the mesh cycle. However, the symmetry is lost and the load share never reaches one as the modulus (at 140°C) falls below 10 GPa (Fig. 4). 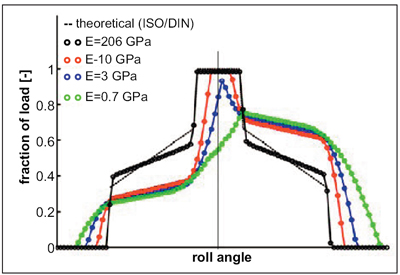 The deflection of the loaded tooth on the plastic driven gear is the cause of this skewed load share curve. As the loaded tooth is deflected, the rotation­al angle of meshing is moved out of phase, thus causing both preliminary contact by the next tooth entering mesh and prolonged contact at the end of mesh by the preceding tooth. That preceding tooth is being unloaded and is straightening back to its undeflected form (Fig. 5). 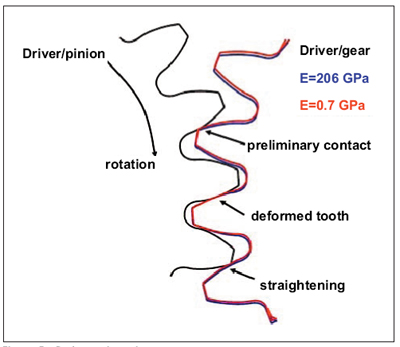 This increased contact—both entering and leaving mesh—will increase load sharing and thus lower the root stresses. Table 1 shows the results given by the FEA and semi-analytic methods. You can see the effect—as the modulus decreases, the FEA shows the actual stress decrease. The difference between the theoretical and actual (FEA) also be­comes more significant. While most semi-analytic approaches allow no dependency for root bending stresses on modulus, the FEA shows there is in­deed an effect of tooth deflection, which is indirectly dependent on modulus. 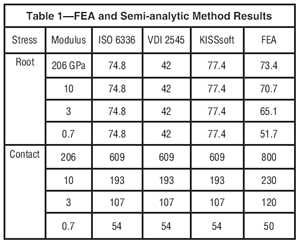 Fatigue tests correlation. Loads were selected by using FEA to get a reason­able number of cycles. The torques of four, five, six and eight Nm were run in the Berlin test rig. The gears were run constantly at 3,000 rpm and 140°C. Two materials were molded and tested—an unfilled PA46 and PEEK. Based on the torque levels, the root stresses were calculated using the FEA and ISO 6336. They are then being compared to tensile bar fatigue data. As you can see in Figure 6, the root stresses generated with FEA (labeled corrected) correlate well with the tensile specimens, while the ISO 6336 calculations exhibit much less of a correla­tion. Since the uncorrected or ISO 6336 equations yield apparently higher allowable stress values, caution in utilizing previously generated gear data must be used, as it may portray a false safety factor. This will depend on the loads, modulus based on temperature and resulting tooth deflection. 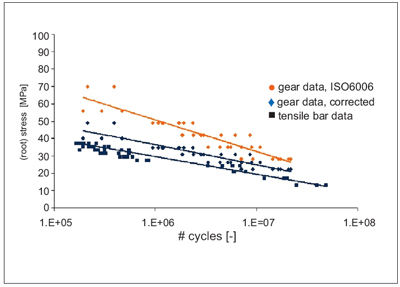 Tooth deflection vs. load and modulus. The effect of a lower material modulus has been shown to be that the tooth deflects under load. The modulus may be lower as a matter of material selec­tion; for example, an elastomer vs. a thermo­plastic. However, the modulus of thermoplastics is temperature- dependent and therefore may also be lower due to exposure to higher operating environ­ment temperatures or increased frictionally gener­ated temperatures. For example, 3 GPa is the modu­lus of an unfilled PA46 at 23°C, where at 140°C it has a modulus of 0.7 GPa. Modulus and load are recipro­cally linked in this tooth deflection behavior. Stiffer materials will exhibit the same behavior as lower modulus materials when the corresponding load is increased. Figure 7 shows two identical results demonstrated with two different loads and moduli. 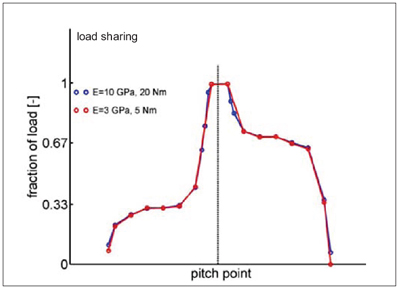 Additional work. Up to this point, work has been done on a steel driver and plastic driven gear pair. Employing the noise and economical advantages of plastic gears often involves a plastic-on-plastic gear pair. The effects of tooth deflection can now be exhibited in both gears—both the driver and the driven. If we look at our load share curve again in Figure 8, we see that the curve now retains its symmetry. Also, the 1/3-2/3 portion of the curve now falls back on the “theoreti­cal” values. The prolonged tooth contact—early and late in the roll angle—result in the load share peaking at 2/3, not one. 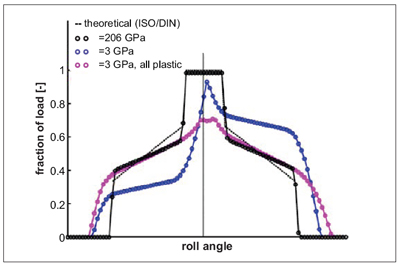 Figure 9 shows the increased contact ratio and the deviated contact path that result first from one plastic gear, and then increases as two plastic gears are used. 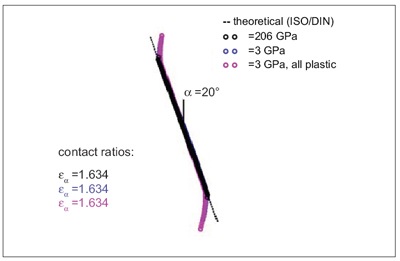 As previously pointed out, two unfilled materials were fatigue tested in injection-molded gears at the University of Berlin on the test rig. The two unfilled materials—PA46 and PEEK—were selected for their known applicability and use in the engine and under-the-hood automotive applications. Exposure to the oil lubrica­tion and 140°C should not be a concern for either material. Figure 10 shows the fatigue results from these tests. 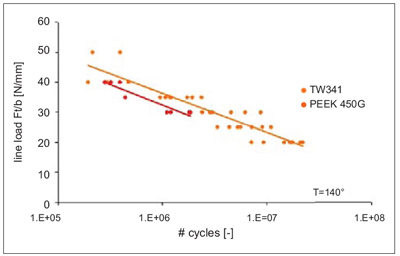 PA46 shows impressive results on gear tests. PA46 is a highly crystalline polyamide in the same family with PA66 (nylon). It gains crystallinity of 70% vs. the 50% of PA66 or PA6 due to symmetrically re­peating CH4, thus allowing more rapid and frequent coupling of the amide groups, CONH (see Figure 11). The speed of this crystallization allows this to happen, regardless of injection molding tooling temperatures. 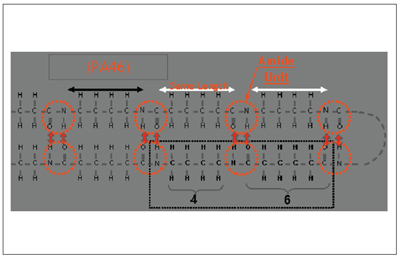 This high crystalline nylon then sees an increase in nearly all properties important for gears. Wear is re­duced while temperature capability is increased. Fatigue, especially in elevated temperature environments, is also dramatically improved (Figs. 12-14). 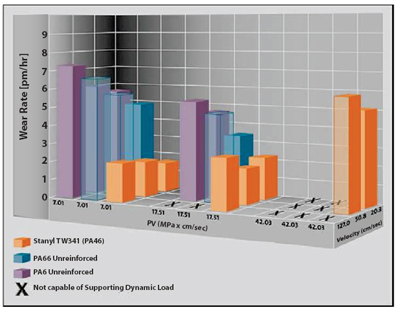 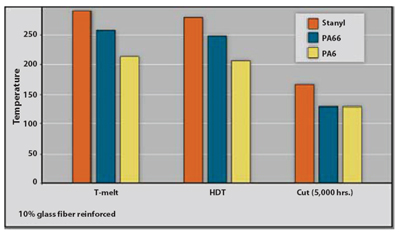 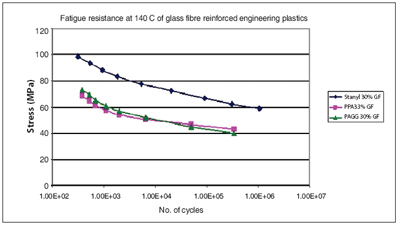 Conclusions
Lab-generated tensile fatigue data can be used to predict plastic gear life. However, in order to utilize this data, it must be known what the actual root stresses in the plastic gear are.

If fatigue data are generated from actual gears—and that data is taken back to a typical S-N curve—know­ing how the root stresses were calculated and if the stress values were corrected for tooth deflection are paramount.

Tooth deflection can cause large variances between the actual root stresses vs. theoretical. There­fore, gear tooth deflection must be analyzed and ac­counted for. This will require understanding the an­ticipated load, operating temperature plus frictionally induced heat and the corresponding ma­terial modulus at that cumulative temperature.

Steve Wasson received a Bachelors of Science in Mechanical Engineering from Michigan Technological University in 1988. He has spent 20 years in the creative design and application of plastic materials, and is the recipient of 15 patents. He has previously worked for Dow Chemical, BASF, and LNP/GE Plastics. He is currently at DSM Engineering Plastics developing gearing applications utilizing the high-performance Stanyl nylon 46 material.