Home » The Business of Going Green

The Business of Going Green

With furnaces commonly known for expelling smoke and flame, it’s hard to believe energy and environmental awareness is even a possibility in the heat treating industry. Discussions on oil quenching, salt quenching and waste streams don’t exactly lead to rally cries of “Save the Planet.” It comes as no surprise that the heat treating industry is known more for its energy consumption and waste than its green policies and practices.

As green technology dominates the headlines this election year, there’s an added interest for many industries in maintaining environmentally safe working conditions as well as minimizing energy consumption. Not an easy task for an industry that is currently using 17 percent of the electrical power in the United States, according to a recent report from the Metal Treating Institute (MTI).

Green technology, however, is infil-trating most sectors of the manufacturing complex, including the heat treatment industry. Experts are finding ways to minimize their waste and energy consumption through new technologies, sound business models and focusing on product development. 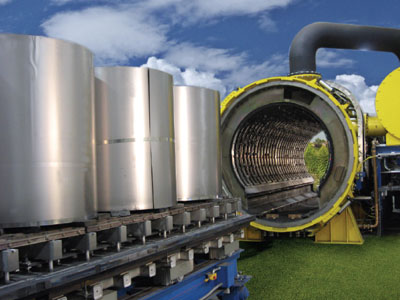 Promoting a Green Product
Green heat treating has become a hot topic, particularly in vacuum carburizing, as the technique is seen as one of the more environmentally friendly processes in the industry. According to Janusz Kowalewski, vice president of vacuum systems at Seco/Warwick Corp., the vacuum method doesn’t create any harmful constituents for the environment.

“If you’re using atmospheric furnaces, you have a protective atmosphere which could create CO2 and the gases can be harmful,” Kowalewski says. “The vacuum furnaces are not generating heat, there are no flames and it’s much cleaner with gas quenching.”

Despite the many benefits of the technique, Kowalewski notes that vacuum heat treating currently makes up a small percentage of the overall market. Companies such as Seco/Warwick, ALD-Holcroft Vacuum Technologies Co. and Solar Atmospheres, Inc. are working to increase the visibility of the method. Discussing its environmental impact and its potential as a green product is a good place to start.

“Our electrically heated, low-pressure carburizing furnaces produce significantly less greenhouse gases than the traditional method of carburizing in atmosphere-based furnaces,” says William Gornicki, vice president of sales and marketing at ALD-Holcroft. “Traditionally, high volumes of carburized components could most cost efficiently be processed in big, atmosphere furnaces. These types of furnaces are less capital intense. However, the vacuum capabilities now on the market are making that argument less effective.” 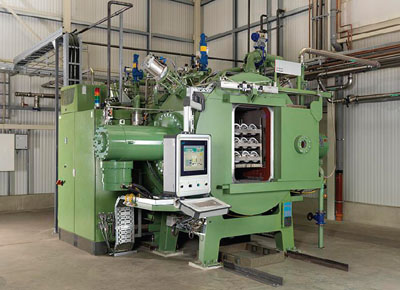 By minimizing or even eliminating downstream operations like straigh-tening or post heat machining, significant costs are removed from the manufacturing structure. “A far more uniform case depth is possible with vacuum carburizing. This most often provides higher power densities enabling smaller or lighter components with the same capabilities,” Gornicki says.

While there have been innovative developments for burner efficiency, tighter furnaces and insulation, Gornicki believes the heat treating industry is lagging behind in energy conservation.

“The best we can do is to continue to promote vacuum processing,” Gornicki says. “An improved culture will make selling our equipment easier. ”

Trevor Jones, project engineer at Solar, agrees that vacuum heat treating with gas quenching is the most environmentally friendly process on the market. He states that the only continuous negative byproduct is the electricity use. 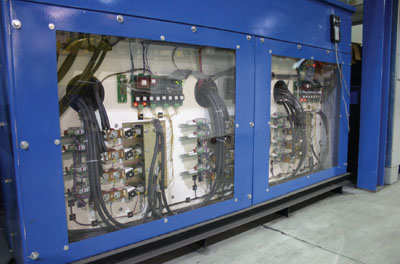 Solar, with the help of its subsidiary, Magnetic Specialties, Inc., has devel-oped a power supply called the FCS 2000 that runs more efficiently than the industry standard power supply from 5 to 20 percent. This improved efficiency is partly due to the fact that the FCS is a “dry” power supply and uses no cooling water to maintain the required operating temperatures.

“The power supply saves money for those who are being charged a power factor penalty from the utility company because the FCS runs at unity power factor,” Jones says.

“Everyone is looking to save energy right now and this is giving us some advantage in the marketplace,” Kowalewski says. “Our power management system regulates how much of the power is coming to the furnace, according to the temperature.

Kowalewski says it’s critical to monitor the temperature of your load and to regulate or control how much power is coming to the heating elements. “We’re seeing a 20 to 30 percent improvement of energy costs with this system.” 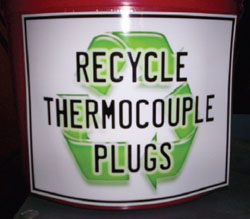 The purpose of the original design was to create a single system of alternate control of heating and cooling processes that would be controlled by a single frequency converter whose output, through contactors, are simultaneously connected.

In a standard vacuum furnace, the cooling process is not controlled, and the blower motor (3-phases, induction motor) forcing gas circulation through the workload is not adjustable.

The operational benefits of the power management system include step-less control of heating and cooling power; programmable cooling rate controlled according to the load temperature; martempering quench capability; working with various cooling gases; no blower motor start-up over current and fewer electrical components; and a reduction in both equipment and maintenance costs.

Conservation Efforts vs. Customer Needs
While power management is just one of the ways companies can cut down on energy consumption, most don’t have a specific committee or policy in place for green business practices. “We continually look for ways to become friendlier toward the environment by other means,” Jones says, “typically in the form of energy and resource conservation.”

In addition to controlling power supply demands, Solar has come up with several other steps, big and small, to augment its green infrastructure. The company has installed variable speed drives on all its pumps and motors to slow down or stop the pumps when there is no demand. The company also strives to save gas wherever possible, primarily using nitrogen, argon, hydrogen and helium, which pose little or no risk to the environment.

“Another small contribution Solar is making is to send used materials to recycling facilities such as our used thermocouple wire,” Jones says. “These thermocouples have historically been thrown into the garbage, but now the scrap will end up back in the metals refining industry, reducing mining costs.”

The trouble with promoting green standards in the heat treating industry is that the companies still have to address the specific needs of the customers.

“Many times the requirements specify how the heat treating process must be performed,” Jones says. “A vast number of jobs require the parts to be quenched in oil or salt in order to meet the specifications for the customer. These are notorious for being unfriendly to the environment.”

Jones says the only way to change this is to change the specifications, some of which have been around for 60–70 years. “It would be difficult to get these specifications changed because some of the requirements on certain materials would not be satisfied unless it was quenched in oil or salt.”

While Solar only uses high-pressure inert gas to quench parts, the company believes the industry needs to develop new materials for quenching. “These challenges can only be overcome by going to the engineers that initially developed the specs and convince them to change it,” Jones says.

If these specifications can’t be al-tered, the company is at least attempting to govern its green culture in other areas of the workplace. “Providing and maintaining a work environment that is safe, clean and reflects our respect for human dignity,” is taken directly from Solar’s mission statement.

The lighting at the office buildings at Solar has been replaced with electronically-ballasted fixtures and the company boasts a paper recycling program. They are proud to report in a recent newsletter that 90 percent of the employees at Solar have work spaces that include a view outside.

“Some of the areas of the industry may not allow for much improvement in terms of becoming green because of the nature of the process or costs to the company may put them out of business,” Jones says.

If a company cannot find justifiable means to promote green standards and initiatives in its own backyard, there are still many viable ways to remain environmentally conscious.

A. Finkl & Sons Co. is a supplier of forging die-steels, plastic mold steels, die casting tool steels and custom open-die forgings. With operations that include melting, re-melting, forging, heat treating and machining, the Chicago-based manufacturer was interested in lowering the effects of the carbon dioxide released during production runs.

Due to the nature of the operation, there wasn’t much internally the company could do to lower its carbon footprint. Instead, the company created a green program long before the term popped up in every newspaper, magazine and blog dealing with environmental issues.

Since 1990, the “Forging a Fresher America” program has planted trees in protected forests in Wisconsin and Illinois in an effort to balance out some of the company’s carbon and energy output. Recently, the company donated $261,500 to plant 2 million trees in Wisconsin.

While A. Finkl & Sons may not be able to control some of its internal waste and energy consumption, they’re taking responsibility for it and have been for several years. Hopefully, other organizations will follow suit.

Jones at Solar states that an improved green culture can help companies become more efficient with energy consumption as well as heighten awareness of the negative impacts to the environment.

“This could potentially lead to cost savings which may be passed down to the customer who will greatly appreciate it.”

According to Jones, companies that are environmentally conscious have a tendency to have a cleaner working environment that is visually pleasing and gives the employers/employees the will to maintain it.

While the heat treating industry as a whole may not be winning any conservation awards, there are plenty of individuals hoping to make a significant difference in the future.

“There are many people in heat treating that are working to lower pollution and expend less energy, and very innovative systems are being developed for this purpose,” Kowalewski says. “As an industry, however, there is still much more we can do.”