Industry experts give us the cold, hard facts on the current state of broaching 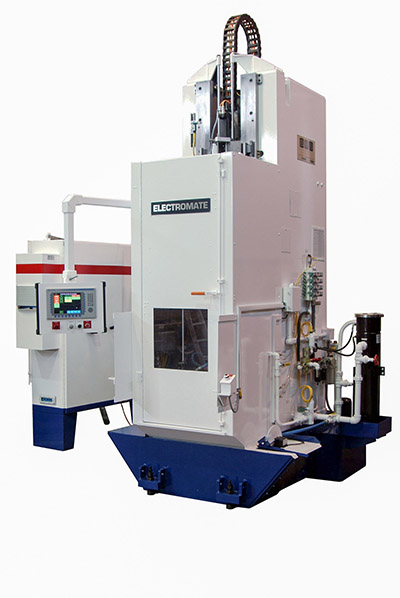 In 1964, a young and tidy Bob Dylan sang away in that infamous voice of his, all nasally and grating yet wonderfully distinct, opining to the fervent masses: “The times, they are a-changin.”

The inherent beauty of the song is that Dylan was musing about everything and nothing all at once, as the timeless lyrics are vague enough to work on a never-ending amount of levels — political, societal, technological, religious, et al.

What Dylan was probably not singing about, however, is broaching.

Broaching machines could accurately be described as dinosaurs — ancient, massive constructs that they are; unwieldy and intimidating, perhaps, but incredibly effective. For years the broaching industry has remained more or less stagnant, though nonetheless strong and undiminished. Maybe it’s not exactly trudging forward, but it is strafing sideways with giant, thunderous steps.

As such, there really isn’t any new, earth-shattering information to divulge; no clever, fluffy words to weave on the precious pages that follow.

So instead of wasting your time with filler verbiage, we decided we’re just going to give it to you straight.

Better yet, we’re going to let them give it to you:

“ It’s the same as ever, in that broaching is still the best way to make a spline – or at least quickly. Other internal shapes, such as hexes and squares are best made by broaching as well and probably always will be. Some of the external or surface broaching operations are being done with CNC now, but there are still cases where the production quantities are such that you still need to broach it because it’s the fastest and least expensive way to make them.

“ You could make the argument that people coming out of the engineering schools today aren’t learning about [broaching], because the technology is so old. It’s what people did 50 years ago, so maybe it’s true that people don’t have the same knowledge of the process as they would have in the past because they’re learning about CNC machining and other types of machining, but not the old standby, tried and true technology.

“ The thing that people need to be educated about is that [broaching] still is the most efficient and cost-effective way to remove metal. It’s possible that some people still because they don’t have experience with it, but it’s actually a very simple technology. It’s simpler to run and maintain than even a CNC machine. 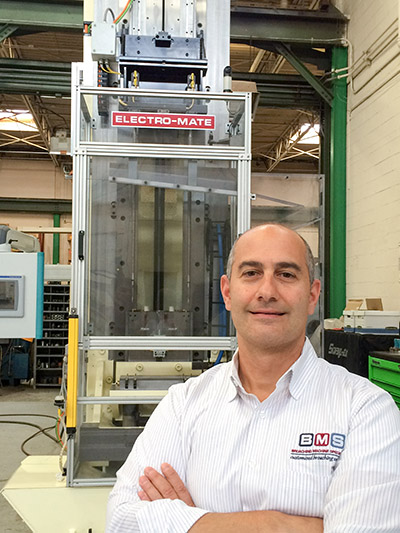 “ Once people get over their initial fears thinking that it’s complicated and foreign, they’ll realize how easy broaching is and how cost effective it is. My father has been in this business since the 1960s and what he told me 20 years ago is still true today: Once someone buys a broaching machine and discovers for themselves how productive they are and inexpensive to operate they are, they almost always find another application to buy a broach for.”

“ There’s not much new going on in broaching other than customers asking that we hold tighter and tighter tolerances. They’re thinking that these are high-end CNC machines but, of course, they’re not. So if there’s anything new, it’s that. Our challenge is always to be more competitive with our tooling and designing our tooling in different ways to accommodate those tighter tolerances.

“ [Broaching] is going to become more cost effective as the younger engineers coming out of college are introduced to this method of manufacturing and this method of machining, and they see what it can do. Right now they’re really not taught anything about it. It’s considered a blind art. Their instructors kind of steer them away from that and look for alternative method of machining.

“ I think [broaching] is going to expand. I think that as people become more conscious of cost and realize that we can hold tolerances and move material faster than any other method of machining — nobody can move metal faster than we can; we can move cubic inches of material in a matter of seconds — I think they’re going to be more prone to accept it as a viable method of manufacture for their products.

“ As they learn that I think we’re going to grow right along with them.” 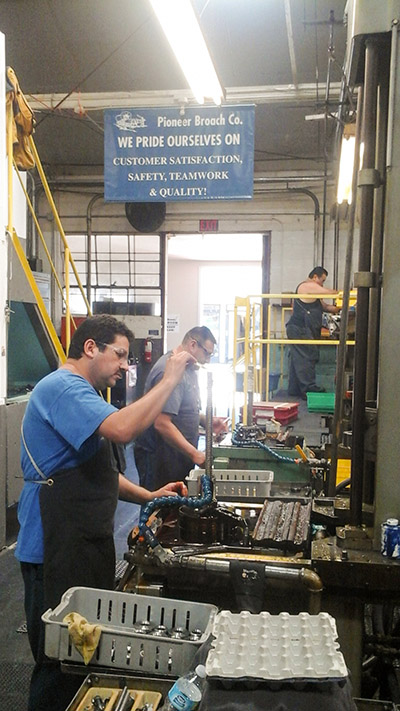 “ I’ve got jobs where 12 or 13 guys try their hand at it and they can’t do it. The guy who can do it shows them, ‘put your hand here, apply the right amount of pressure, let it off right at that spot,’ and so on and so forth. Good guys — smart broach guys — nuhuh, can’t do it. Then I see it and I’m like, ‘How hard could it be? Let me try that’ — no good. The master gets back on there and he gets it, because he’s got feel, he’s an artist — not just anybody can do it.

“ I think that the demise as a process in high-volume production was overestimated early on. I think it’s going to be around for quite a while, because there’s still no faster way to cut high volumes of parts. We’re probably going to go towards dry broaching processes more and more because coolant disposal and contamination becomes an issue. The only competition for helical ring broaching is skiving operations.

“ I think the trend is for hard broaching after a spline is cut into a part and goes through heat treat, they want to go back and run a carbide or some other type of broach to recut the form to size. It’s been around for quite a while but people are starting to take note (in the last two or three years) that it’s necessary, especially with the tighter tolerances required by automakers and aerospace. Basically, it’s overcoming heat treat distortion, because you want to broach up to no higher than 30 Rw C. If you heat treat the parts and get some sort of distortion, you can go back and recut the spline to the proper size.

“ I think the level of interest will probably remain at about the level it is now. I think the driving force is just going to be the sales of automobiles and heavy equipment. As markets expand, more companies are going to need to produce internal splines and things like that.

“ The other trend is the move towards electromechanically driven machines, whether that’s ball screws, roller screws or rack and pinion, rather than the hydraulically powered machines that are tradition. However, we have found that the hydraulic machines are workhorses and last a long time.”

“ Broaching really lends itself to high-production. It really lends itself from part to part. It can hold very close tolerances. But in that same token, the tooling is very specific, the setups are long and if your mode of manufacturing is such that you run large numbers of parts, you can’t beat the broaching process. But in today’s world we’re faced with lean manufacturing and they’re not setting up to run large numbers of parts. They want to run 400, 500 parts and then change over to the next part. That is one reason why people are hesitant to go into broaching — because the setups don’t allow you to do that, basically.

“ Broaching is basically in two different parts: You’ve got surface broaching, where you broach on the outside of a part, and you’ve got internal broaching , which is probably the most traditional, where you’re putting keyways and splines inside of a hole.

“ Surface broaching is in a world of hurt, because of the lean manufacturing. That end of broaching is kind of dying. The internal broaching, there’s still no better way to put those forms into parts. That state of broaching is still going very well, and it’s where our future lies.

“ In years past — 20 years or more — organizations like SME were very popular in their meetings. Oftentimes, a broach company would come in and educate a company on broaching. People just aren’t attending those meetings anymore. All external companies are hurting. The young engineers are basically all tuned into the internet.

“ So how do I get onto the internet and get the broaching word out to these engineers who have never heard of it or haven’t learned it in school? It’s a challenge, and I don’t know if I have the answer right now.” 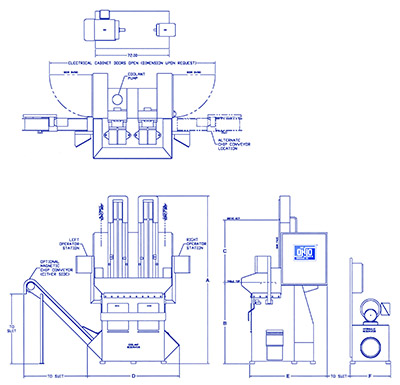 “ The process has remained relatively the same since its inception. There have been new developments from a tool manufacturing standpoint, things like tighter tolerances and holding the broach tools and things like that.

“ The thing is, they don’t really teach [broaching in schools] anymore. It’s kind of a black art, to be honest. I think [broaching] is a viable process and will continue to be a viable process, but some people aren’t in-tune to it and are looking at EDM and things like that. Don’t get me wrong, it’s a great process, it’s just when you get into higher productions it’s not a cost-effective method to produce certain figures on parts.

“ I think there needs to be a little more emphasis on [broaching] as a process for students going through some type of manufacturing program. It’s such a specialized process and that’s why not everybody does it. That’s kind of why there’s just broaching companies, just like there’s people who do just grinding, because that’s what they specialize in. It’s just that grinding tends to be a little more commonplace than broaching is.

“ When looking at the state of broaching, it’s really going to be a reflection on a lot of the major industries, such as automotive or heavy equipment and things like that, where there are a lot of broach components that are used. A lot of external surface broaching has gone down quite a bit over the last 10, 15, 20 years, just with the advent of CNC machines that have live tooling and things like that, where flats or slots or things of that nature can be done right on the same machine instead of a secondary machine like broaching.

“ As far as internal shapes like keyways or splines or things like that, there still isn’t a better cost effective method to produce those types of features than broaching — especially when you’re talking about production quantities or higher volumes.

“ You’re not going to find a more effective way to do it.”