Introduction
This review of elastohydrodynamic lubrication (EHL) was derived from many excellent sources (Refs. 1–5). The review of Blok’s flash temperature theory was derived from his publications (Refs. 6–9). An excellent general reference on all aspects of tribology is the Encyclopedia of Tribology (Ref. 10). 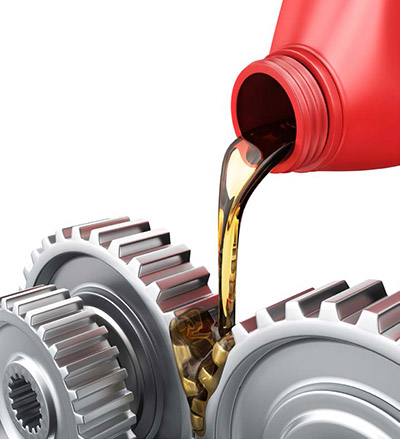 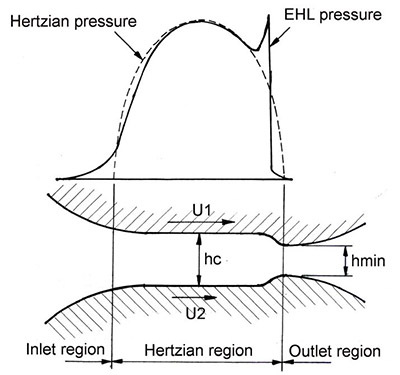 The inlet region. The lubricant that is adsorbed on the surfaces of the contacting bodies is entrained into the EHL contact by the rolling motion of the bodies. Entrainment of the lubricant is greatly facilitated by its viscosity increase because the high viscosity resists flow, makes it more difficult to squeeze the lubricant out, and viscous drag forces cause it to move with the surfaces into the Hertzian region. As a result, the inlet pumps the film up to a thickness that is sufficient to separate the opposing bodies.

The Hertzian region. By the time the lubricant enters the Hertzian region, its viscosity has increased by a factor of 1,000 and it is trapped in the contact. At maximum Hertzian pressures typical in gears and rolling element bearings, the lubricant undergoes a phase transition into a solid glassy state. From this point on the lubricant no longer behaves as a Newtonian fluid, and it can be considered a pseudo-solid. In the Hertzian region the surfaces of the bodies are parallel and separated by the central film thickness that has an essentially constant thickness. The film within the Hertzian region is extremely stiff; therefore if the load increases, the bodies deform more than the central film thickness decreases. Consequently, EHL contacts are relatively insensitive to changes in load and the main effect of increasing load is to deform the surfaces, which increases the area of the Hertzian region, but does little to alter the shape of the inlet zone where the EHL film is formed. Bottom line, increasing load leaves the film thickness virtually unchanged.

Sliding within the Hertzian region. Sliding friction within the EHL film increases the bulk temperature of the gear teeth from a cold start by accumulating heat from each tooth engagement. The bulk temperature of the gear teeth increases until the heat input is equal to the heat loss to the surroundings. Once the bulk temperature reaches equilibrium, there is no further change in gear tooth bulk surface temperature — unless the operating conditions change. The heat input is confined to the immediate area of the Hertzian region and its duration is only a fraction of a millisecond long. Consequently, the heat produced by frictional heating within the EHL film is removed by conduction through the film into the tooth surfaces, and by convection as the hot oil exits the outlet region. Due to the short contact time the heat penetrates only a shallow distance into the gear teeth and is rapidly dissipated. Consequently, as the contact point moves on, the heat input disappears immediately and the surface temperature of the gear teeth returns promptly to the equilibrium bulk temperature. After one revolution of the gear, a particular point on the gear flank comes into engagement with essentially the same bulk temperature as the previous engagement. Although frictional heating does not directly alter the film thickness within the Hertzian region, any increase of the bulk surface temperatures due to frictional heating indirectly reduces film thickness by decreasing the viscosity of the lubricant in the inlet region.

The sliding is significant because it generates traction forces that result in energy losses. If the lubricant behaved like a Newtonian fluid, the high viscosity would lead to extremely high traction force. Fortunately, however, when subjected to high shear stresses the lubricant behaves like a plastic pseudo-solid with limited shear strength that is characterized by its traction coefficient. The bulk surface temperatures are controlled by heat generated in the Hertzian region and

the temperatures can vary significantly, depending on the molecular structure of the lubricant base stock, which influences a lubricant’s solidification pressure, shear strength, and traction coefficient. Furthermore, depending on anti-wear and anti-scuff additives that may be in the lubricant, the sliding and heat generate boundary tribofilms that help to prevent adhesive wear.

Shear thinning. Lubricants containing high molecular weight polymers, which are additives known as a viscosity index (VI) improvers, may lose viscosity under the high shear rates that occur in the Hertzian region and reduce the EHL film thickness. This is known as shear thinning.

The outlet region. As the lubricant leaves the Hertzian zone, film pressure tends to boost the lubricant flow toward the outlet region. The amount of lubricant within the contact is controlled by the inlet and continuity of flow can only be maintained if there is a local restriction in the outflow, which causes a constriction to form at the outlet. This is the position where the minimum film thickness occurs. A sharp spike is generated in the film pressure next to the constriction on the upstream side. The pressure drops abruptly to atmospheric pressure downstream of the spike and the lubricant viscosity returns to its atmospheric viscosity. Consequently, the contact pressure between the surfaces is negligible in the area of the minimum film thickness. The divergent region of the outlet generates negative pressure that causes dissolved gases in the lubricant to come out of solution. This ruptures the lubricant film, which cavitates and forms a wavy wake that consists of separate lubricant streamers intermixed with air.

Assumption (1) is violated if an EHL film is present; assumption (2) is violated if the speed of either surface is too slow; and assumption (3) is violated for a high gear ratio because the pinion typically runs hotter than the wheel. Therefore, Blok’s flash temperature theory applies only to the boundary lubrication regime where the EHL film is non-existent, and the only protection against scuffing is any tribofilm deposited by lubricant additives. But once the tribofilms fail, the lone remaining protection is the natural oxide layer on the gear teeth. Consequently, Blok’s flash temperature is not applicable to the mixed-film or full EHL regime.

Robert Errichello, PE, heads his own gear consulting firm— GEARTECH—and is a founder of GEARTECH Software, Inc. A graduate of the University of California at Berkeley, he holds B.S. and M.S. degrees in mechanical engineering and a master of engineering degree in structural dynamics. In his more than 30 years of industrial experience, Errichello worked for several gear companies; he has also been a consultant to the gear industry for more than 20 years and has taught courses in material science, fracture mechanics, vibration and machine design at San Francisco State University and the University of California at Berkeley. He is also a member of ASM International, STLE, ASME Power Transmission and Gearing Committee, AGMA Gear Rating Committee and the AGMA/AWEA Wind Turbine Committee. Errichello has published dozens of articles on design, analysis and the application of gears, and is the author of three widely used computer programs for the design and analysis of gears. He is also a longtime technical editor for Gear Technology magazine and STLE Tribology Transactions, and has presented numerous seminars on design, analysis, lubrication and failure analysis of gears. Errichello is a past recipient of the AGMA TDEC award and the STLE Wilbur Deutch Memorial award.