And really, can you blame her?

With approximately 200 total exhibitors and 55,000 square feet of showroom space, trying to crunch the robust numbers of the biennial event down into one bite-sized numeral can be a bit like ice skating uphill. And even if Blackford did have a favorite (not that we’re alleging anything of the sort), it’s unlikely she would ever fess up — you see, offending relatives isn’t part of her MO.

“I’ve heard people refer to Gear Expo as a ‘family reunion,’” Blackford says. “If you’ve been in the industry for a long time, you’ll see a lot of people — both exhibitors and other people just walking the aisles –that you haven’t seen in two years or even longer.

“It’s a great place to touch base with people you already know in the industry, but even more importantly it’s your opportunity to see the latest and greatest technologies, services and companies that are serving the industry. So there’s sort of a level of enthusiasm that you get at [Gear Expo] that you don’t get elsewhere.”

The Players Come Together

Since 1986, Gear Expo — the “Drive Technology show” that consistently brings out an impressive throng of power transmission professionals — has rotated around the country every two years to industrial meccas like Indianapolis, Cincinnati, Columbus and Nashville. This year’s show stops at Detroit’s Cobo Center, a gleaming, glass-walled convention center featuring 623,000 square feet of contiguous exhibition space that’s eternally guarded by a statue of the great Black Bottom slugger Joe Louis, who stands crouched and loaded, ready to throw one of his legendary “brown bombs” at unsuspecting passerby. 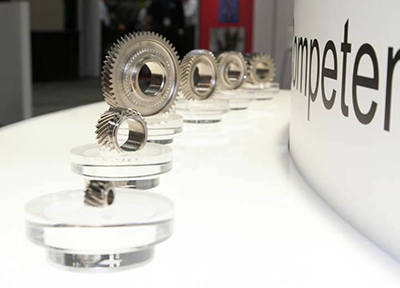 This year's Gear Expo will display over 750,000 pounds of machinery.
- Click image to enlarge

“It’s a place where all the players come together and just converse and see the latest innovations, technologies, features and processes,” says Amir Aboutaleb, AGMA technical division vice president. “It’s really a networking opportunity for the members and players within the gearing industry.

Attendees represent a large contingent of tangentially connected industries, including automotive, oil and gas, aerospace, off-highway, agriculture and construction, while exhibitors will display more than 750,000 pounds of machinery on the show floor.

On top of the general, meet-and-greet opportunities that Gear Expo provides, there will also be several returning components to the show’s program.

“One of our most popular features is the Solutions Center,” Blackford says. “It’s an education space that’s on the show floor, and exhibitors give presentations every half hour during the show. You have a chance, for free, to come hear the latest solutions people have to offer. Then you can ask questions to the presenter, and if it’s a more involved question you can go back to their booth with them and find out more.

“Also at the Solutions Center, we have keynote presentations once a day that are on larger topics. They’re on emerging technologies or business issues that speak to pretty much everybody that would attend the show.” 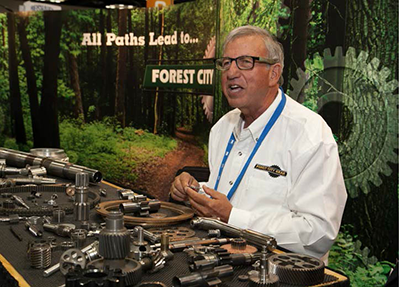 “The educational opportunities are great for newcomers as well as the [veterans],” Aboutaleb says. “The newcomers get to hang out with some of the [veterans] and learn from their experiences. Just sitting in the class and listening to the lectures — it’s part of the game — but the opportunity to speak with the guys who have 10, 15 years of experience and asking them questions is the biggest part.”

Another popular aspect of the show that will return, according to Blackford, is the networking reception, which will take place on Wednesday, Oct. 21.

“It’s a time to grab a drink and maybe a snack and huddle up with your fellow gear industry peers in a more casual environment,” she says.

Also taking place on Wednesday is a unique aspect of the 2015 show: AGMA’s centennial celebration kick-off. AGMA began in 1916 in Alexandria, VA and has grown into an association with about 430 member companies.

“Attendees will get to see the history of AGMA in exhibit form (throughout the three-day show) and on Wednesday, after the networking party, AGMA is holding a centennial dinner at Gear Expo that will be the kick-off event for the year,” Blackford says.

With so many moving pieces, Blackford says she’s always pleasantly surprised that everything seems to come together every two years when Gear Expo rotates back under the industry spotlight.

And it was then (with absolutely no further coercion on our part, we swear), that Blackford finally decided on her favorite:

“Putting together a trade show is amazing, because a little city is built in a matter of a couple of days,” she says. “Just like the rest of the attendees, it’s always great to see all the people you haven’t seen in two years and just see everything that all these people have to offer.”