Corporate President of Solar Atmospheres, Roger Jones has won the prestigious 2016 M. Lance Miller Legend Award from the Metal Treating Institute. This award is given to individual who is a current or former MTI member, company executive/employee/owner and is given in recognition of a lifetime commitment to the betterment of the Metal Treating Institute, with one or more notable accomplishments. Roger has served on numerous committees for MTI, and twice served on the Board of Trustees. In addition to these positions, Roger served as MTI President in 2004-2005.

MTI Awards Chair Jackie Peters stated during the award ceremony, "It goes without saying that Roger Jones has contributed above and beyond to the Metal Treating Institute. He has always been gracious with his time serving at every level for the betterment of the industry. This award is well deserved from his service and accomplishments to the industry and the Metal Treating Institute."

MTI Awards Chair, Jackie Peters stated during the award ceremony, "In our industry, when you think of the word service and commitment, the name Bob Hill always comes to mind. No matter what the committee or project, he is there willing to help. He is passionate about the industry and cares about the people he serves with. He exemplifies what service is all about."

The awards were bestowed on October 4th at MTI's 2016 Annual Fall Meeting, held in Nashville, TN. 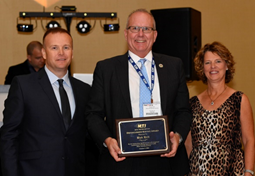