,In May 2015 Sandro Schäfer stood on a stage in his new function as managing director and ceremoniously opened the 300 m² production area of his newly founded start-up DVS Tooling in Hemer, Sauerland. Four years later, the start-up and member of the DVS Technology Group has become a medium-sized company with a turnover of over 10 million euros. The high-precision tools for Präwema gear honing are used not only on the domestic market, but also in Brazil, China, the USA and India. In principle, the Hemer Hightec honing tools are in demand wherever gear components are manufactured, because in combination with the technology of the sister company Präwema they contribute to a better noise behavior in vehicle transmissions.

The success soon made the old location too small and so four years later Schäfer stands again on a stage to inaugurate the modern new building of DVS Tooling. 1,500 m² of production area and 500 m² of office space were built on Amerikastraße in Hemer, taking into account further expansion reserves. Enough space for further developments and an impressive opening ceremony with 140 invited guests. Among the guests was Josef Preis, CEO of the DVS Technology Group, who praised the DVS Tooling team and the development of the company in his opening speech. He also attributed the success to the "Sauerland inventor mentality and the down-to-earth attitude of the people in the region." Steen Rothenberger, chairman of the group's supervisory board, added: "Extraordinary people can achieve extraordinary things" and referred to all employees of the DVS Technology Group.

The highlight of the celebration was an impressive laser show, which took the guests on a journey through time on the development of laser technology. The bundled electromagnetic waves are used by DVS Tooling for the fine machining of diamond-coated surfaces on dressing tools. The diamond coating, which is chaotically structured under microscopic view, thus becomes a homogeneous surface and produces high-precision dressing results on the honing tool. 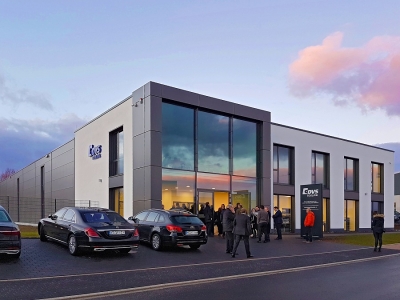