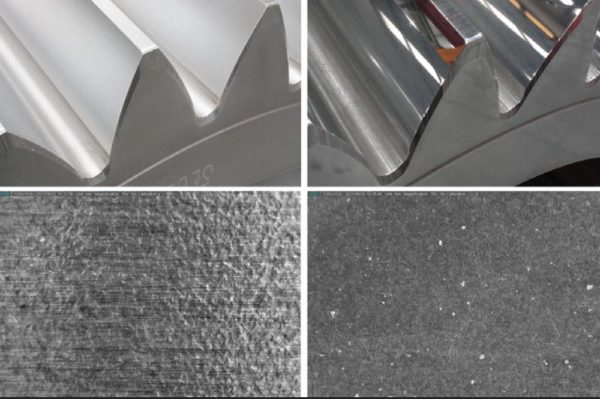 To increase cost efficiency in wind turbines, the wind industry has seen a significant rise in power density and an increase in the overall size of geared components. Current designs for multimegawatt turbines demand levelized cost of energy (LCOE) reduction, and the gearbox is a key part of this process. Since fatigue failures nearly always occur at or near the surface, where the stresses are greatest, the surface condition strongly affects the gear life. Consequently, an improved surface condition effectively avoids major redesign or increased material cost due to an increase in part size. Additional finishing methods such as shot peening (SP) and superfinishing (SF) significantly increase the gear load capacity, but these effects have not yet been adequately considered in the current ISO 6336 standard or in any other gear standards. The combination of SP followed by SF will be described here as an “improved gear surface” (IGS).

Standardized methods, like AGMA 2001-D04 or ISO 6336 for the calculation of the load carrying capacities of gears are intentionally conservative to ensure broad applicability in industrial practice. However, new applications and higher requirements often demand more detailed design calculations nowadays; for example: long operating lives in wind power gearboxes or fewer gear stages and higher speeds in e-mobility applications result in higher load cycles per tooth in a gearbox.

Effect of the ISO 6336-3:2019 Standard Update on the Specified Load Carrying Capacity Against Tooth Root Breakage of Involute Gears

Stefan Sendlbeck M. Sc., Dipl.-Ing. Maximilian Fromberger, Dr.-Ing. Michael Otto, and Dr.-Ing. Karsten Stahl
No Comments
A calculation-based study of different variants with regard to contact ratio and tooth root geometry to compare the results from the 2019 version of ISO 6336 to the previous version, released in 2006.
Read More

Jack McGuinn
How difficult is it to design a gear? It depends upon whom you ask.
Read More

The common calculation methods according to DIN 3990 and ISO 6336 are based on a comparison of occurring stress and allowable stress. The influence of gear size on the load-carrying capacity is considered with the size factors YX (tooth root bending) and ZX (pitting), but there are further influences, which should be considered. In the following, major influences of gear size on the load factors as well as on the permissible tooth root bending and contact stress will be discussed.
Read More

In order to properly select a grease for a particular application, a sound knowledge of the influence of different grease components and operating conditions on the lubrication supply mechanism and on different failure modes is of great benefit.
Read More
Free Gear Technology Subscriptions
Subscribe
Free Gear Technology Subscriptions
Subscribe
FEATURED VIDEO
RECOMMENDED