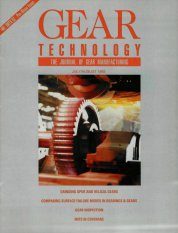 A Flood of Lessons

Michael Goldstein
About the time we were midst of planning the editorial content for this issue of Gear Technology, we, like everyone else in the metro area, found ourselves diverted by the Great Chicago Flood. For a week, it seemed to be all we thought about. Then the tunnels dried out, the stores reopened, and we all went back to work.
Read More

IMTS 92 - The International Manufacturing Technology Show - opens in Chicago September 9 and runs through September 17 at Chicago's McCormick Place. IMTS is the Western Hemisphere's larges trade show. Over 800 companies from all over the globe will be showing products in exhibits covering some 931,000 sq. ft. of space.
Read More

In the 1960's and early 1970's, considerable work was done to identify the various modes of damage that ended the lives of rolling element bearings. A simple summary of all the damage modes that could lead to failure is given in Table 1. In bearing applications that have insufficient or improper lubricant, or have contaminants (water, solid particles) or poor sealing, failure, such as excessive wear or vibration or corrosion, may occur, rather than contact fatigue. Usually other components in the overall system besides bearings also suffer. Over the years, builders of transmissions, axles, and gear boxes that comprise such systems have understood the need to improve the operating environment within such units, so that some system life improvements have taken place.
Read More

Grinding of Spur and Helical Gears

Grinding is a technique of finish-machining, utilizing an abrasive wheel. The rotating abrasive wheel, which id generally of special shape or form, when made to bear against a cylindrical shaped workpiece, under a set of specific geometrical relationships, will produce a precision spur or helical gear. In most instances the workpiece will already have gear teeth cut on it by a primary process, such as hobbing or shaping. There are essentially two techniques for grinding gears: form and generation. The basic principles of these techniques, with their advantages and disadvantages, are presented in this section.
Read More

Investing in Ourselves is the Key to Revitalizing American Manufacturing

Popular wisdom has it that manufacturing in the United States is no longer a viable entity. We are told that quality is poor, skilled labor is difficult to obtain, if not impossible, demand is low, and the government is helping to discourage business. So what should we do, give up?
Read More

Organizing a successful trade show exhibit is not unlike running Operation Desert Storm. The logistics can be a nightmare; the expense, horrendous; the details, mind-boggling. About the only thing you won't have to cope with is having someone fire SCUD missiles at you.
Read More
Free Gear Technology Subscriptions
Subscribe
Free Gear Technology Subscriptions
Subscribe
FEATURED VIDEO
RECOMMENDED