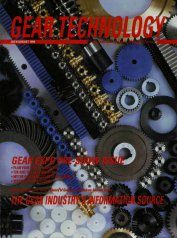 Michael Goldstein
For the first time in probably 15 years, I've attended an auto show. Although I haven't been purposely avoiding them, over the past decade or so, the auto industry hasn't given me a compelling reason to go.
Read More

Bigger and Better Than Ever

Gear Expo 99, AGMA's biennial showcase for the gear industry, has left the Rust Belt this year and landed in Music City U.S.A., Nashville, Tennessee. The event, with exhibitors from around the globe showing off the latest in gear manufacturing as well as metal working processes, will be held at the Nashville Convention Center, October 24-27, 1999. According to Kurt Medert, AGMA vice president and Gear Expo show manager, "In choosing Nashville, AGMA;s Trade Show Advisory Council found a city that is an excellent trade show site. It has the right mix of convention center, nearby hotels, and a clean downtown area with entertainment readily available for the exhibitors and visitors alike. Nashville is in the heart of southern industry, which we see as a focus of growth for the gear industry and its customers."
Read More

Development of Gear Technology and Theory of Gearing

I must admit that after thumbing through the pages of this relatively compact volume (113 pages, 8.5 x 11 format), I read its three chapters(theory of gearing, geometry and technology, and biographical history) from rear to front. It will become obvious later in this discussion why I encourage most gear engineers to adopt this same reading sequence!
Read More

Myths and Miracles of Gear Coating

Three years ago, coated gears seemed to be the perfect solution for the Micro Marine Corporation. The early designs for the gear drive of their MicroCAT human-powered boat used a combination of thin-film dry gear coatings with lubrication and wear-resistance properties. These coatings simplified their design, provided corrosion resistance, made the gear drive environmentally safe and eliminated the need for gear drive lubrication and maintenance. It was a success story in the making.
Read More

The Gear Industry and Y2K

If you think Y2K will mean the end of the world, forget it. General Vladimir Dvorkin recently said, "I'd like to apologize beforehand if I fail to realize someone's hopes for the Apocalypse." Te general was, of course, discussing Russian nuclear missiles, making the point that they are not going to launch or detonate when the calendar rolls over to January 1, 2000. General Dvorkin's American counterparts are similarly optimistic. While all that is a relief, it raises the question: will Y2K be as kind to the rest of society? And more specifically, will it be as kind to the gear industry? According to AGMA's president, Joe Franklin, the answer is a resounding "yes." According to Franklin, the AGMA Board considers Y2K a non-issue within an industry that is well ahead of others in its preparedness for January 1, 2000. But is it really? Does the gear industry understand the problem any better than other sectors of society? It's a relief to know that the nuclear bombs are not likely to fall within the first moments of the year 2000, but how about the computers and machines that keep the worldwide economy together?
Read More

Friction weighs heavily on loads that the supporting journals of gear trains must withstand. Not only does mesh friction, especially in worm gear drives, affect journal loading, but also the friction within the journal reflects back on the loads required of the mesh itself.
Read More

A Brief History of Gears

No one is quite sure when gears were invented. It's universally agreed, however, that they've been transmitting motion in one form or another for quite a long time.
Read More