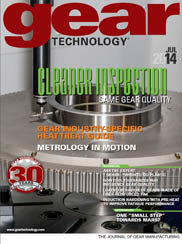 No Excuse is Good Enough

Michael Goldstein
Might some of you may be tempted to skip IMTS this year? Business is just so-so. You can’t afford to be away from the shop. It will be a waste of time because you don’t have the budget for new machine tools or new technology anyway. You’ve cut back on travel expenses. It’s your wife’s birthday...
Read More

No Compromising on Quality at Allison Transmission

Heat treating is one of the most critical operations in the manufacture of quality gears. Everything can be done to perfection, but if the heat treating isn’t right, all of your hard work and efforts are wasted. We know how important it is for gear manufacturers to find the right heat treating service provider. That’s why we’ve compiled this Heat Treat Resource Guide -- the only directory of heat treat service providers that’s specific to the gear industry. The companies listed here are all interested in working with gear manufacturers, and many of them have specialties and capabilities that are uniquely suited to the types of products you manufacture.
Read More

Matthew Jaster
Compact, custom and portable solutions are gaining more attention in manufacturing today as companies seek out the tools that offer the greatest productivity gains on the shop floor. Gear inspection seems to be following suit.
Read More

Recently, a new type of hob with carbide inserts has been introduced, providing higher cutting speeds, longer tool life and higher feed rates when compared to re-grindable, high-speed steel hobs. But with this kind of hob, new challenges occur due to positional errors of the cutting edges when mounted on the tool. These errors lead to manufacturing errors on the gear teeth which must be controlled. In this paper, the tooth quality of a gear manufactured by hobs with different quality classes is analyzed using a simulation model in combination with Monte Carlo methods.
Read More

Loaded Behavior of Gears Made of Fiber-Reinforced PA6

This paper presents an original method for computing the loaded mechanical behavior of fiber reinforced polymer gears. Although thermoplastic gears are unsuitable for application transmitting high torque, adding fibers can significantly increase their performance. The particular case of polyamide 6 + 30% glass fibers is studied in this paper.
Read More

Contact fatigue and bending fatigue are two main failure modes of steel gears, while surface pitting and spalling are two common contact fatigue failures -- caused by alternating subsurface shear stresses from the contact load between two gear mates. And when a gear is in service under cyclic load, concentrated bending stresses exist at the root fillet -- the main driver of bending fatigue failures. Induction hardening is becoming an increasingly popular response to these problems, due to its process consistency, reduced energy consumption, clean environment and improved product quality -- but not without issues of its own (irregular residual stresses and bending fatigue). Thus a new approach is proposed here that flexibly controls the magnitude of residual stress in the regions of root fillet and tooth flank by pre-heating prior to induction hardening. Using an external spur gear made of AISI 4340 as an example, this new concept/process is demonstrated using finite element modeling and DANTE commercial software.
Read More

One Small Step Towards Mars

The complete technical calendar from the July 2014 issue of Gear Technology.
Read More

See the latest video from Slone Gear International, plus read about the gear industry's unsung heroes in the latest blog post.
Read More

Deciding When to Go Plastic