Question: Could you explain what is meant by "horological gearing"? I never heard of this before, although I understand it has something to do with watches. Could you also explain the meaning of a "going gear train"?

The Corpus Clock has a hundred and one little interesting factoids about everything from its design to its unveiling to its message â€” and itâ€™s just hanging out on a street corner in Cambridge.

Clayton Boyer specializes in kinetic sculpture -- especially wooden gear clocks -- and he'd like to share his plans with you.

John Harrison (1693Ă˘â‚¬â€ś1776) - a British clockmaker (and carpenter) whose extremely precise chronometer enabled seafarers to calculate longitude (also known as east-west axis) with a degree of accuracy that until then was unheard of.

What do glam and avant garde rock star Brian Eno, AGMA and Seattle Gear Works have in common? Admittedly, not much. But there is a connection of sorts.

Clocks, Cars and Music on a Saturday Night.

There's nothing like a new year - with the possible exception of birthdays ending in zero - to remind one of the passage of time. Keeping track of time has always been part of the brief of the gear engineer. One of the earliest gear assemblies is the remains of the Antikythera machine, a calendar/calculator dating from the first century B.C. Until the industrial revolution, clock makers and gear designers were usually the same people.

Clocks with wooden gears? In these days of gears made from plastic, steel and exotic materials; it is a little unusual to hear about a practical application for wooden gears. But that is exactly what David Scholl, the owner of Changing Times, a Harlingen, TX, clockmaker is offering us.

Outside of our industry, there's a whole slew of hobbyists working with gears to make clocks, art pieces, watches and all manner of bizarrely shaped gears (you know, all the people that usually end up featured right here in our Addendum section). 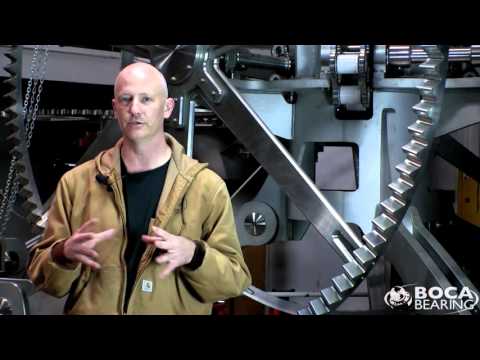