Surface coatings or finishing processes are the future technologies for improving the load carrying capacity of case hardened gears. With the help of basic tests, the influence of different coatings and finishing processes on efficiency and resistance to wear, scuffing, micropitting, and macropitting is examined.

Physical Vapor Deposited (PVD) coatings such as TiN (Titanium nitride) have been a boon for cutting tool manufacturers. They reduce wear and, therefore, extend tool life, which in turn reduces production costs. But PVD coatings are expensive, and when they fail, they cost both time and money, and they causes of the failure are not always readily apparent.

Electroless Nickel (EN) plating, a process dating back to the 1940s, is one of the predominant metal finishing methods today. It is especially suitable for the gear industry, whose end uses span innumerable other industries, providing an endless assortment of requirements, environments, materials and specifications. EN plating has a broad array of functional features, which include:

A main limiting factor in extending the use of hard coatings to machine component application is the lack of knowledge about how these inert coatings perform under lubricated conditions using today's lubricants.

The method of cutting teeth on a cylindrical gear by the hobbing process has been in existence since the late 1800s. Advances have been made over the years in both the machines and the cutting tools used in the process. This paper will examine hob tool life and the many variables that affect it. The paper will cover the state-of-the-art cutting tool materials and coatings, hob tool design characteristics, process speeds and feeds, hob shifting strategies, wear characteristics, etc. The paper will also discuss the use of a common denominator method for evaluating hob tool life in terms of meters (or inches) per hob tooth as an alternative to tool life expressed in parts per sharpening.

Prior to the introduction of titanium nitride to the cutting tool industry in the early 1980s, there was very little progress in the general application of hobbing in the gear cutting industry. The productivity gains realized with this new type of coating initiated a very active time of advancement in the gear manufacturing process.

The first part of this article, which ran in the September/October 1994 issue, explained the fundamentals of gear hobbing and some of the latest techniques, including methods of hob performance analysis and new tool configurations, being used to solve specific application problems. In this issue, the author continues his exploration of hobbing by describing the effects of progress on requirements in accuracy, as well as the latest in materials, coating and dry hobbing.

Today's high technology hobs are visible different from their predecessors. Gear hobs have taken on a different appearance and function with present day technology and tool and material development. This article shows the newer products being offered today and the reasons for investigating their potential for use in today's modern gear hobbers, where cost reduction and higher productivity are wanted.

Design Problem: Develop a gear drive for a pedal-powered water craft that will be easy to manufacture, use and maintain; that will be lightweight enough for the boat to be portable; and that will eliminate the environmental risk of lubricants leaking into the water.

The hob is a perfect example of how a little manufacturing ingenuity can make a reliable, highly productive cutting tool. It's an engineering specimen that creates higher cutting speeds, better wear resistance and increases rigidity. The cutting tool alone, however, can't take all the credit for its resourcefulness. Advanced coating technology from companies like Sulzer, Oerlikon Balzers, Ionbond, Seco Tools and Cemecon helps improve cutting tools by reducing overall costs, increasing tool life and maintaining the highest levels of productivity. The following is a quick recap of new technologies and the latest information in the coating market.

Three years ago, coated gears seemed to be the perfect solution for the Micro Marine Corporation. The early designs for the gear drive of their MicroCAT human-powered boat used a combination of thin-film dry gear coatings with lubrication and wear-resistance properties. These coatings simplified their design, provided corrosion resistance, made the gear drive environmentally safe and eliminated the need for gear drive lubrication and maintenance. It was a success story in the making.

The art of gear hobbing has advanced dramatically since the development and introduction of unique machine and tool features such as no backlash, super rigidity, automatic loading of cutting tools, CNC controls, additional machine power and improved cutter materials and coatings. It is essential to utilize all these features to run the machine economically. 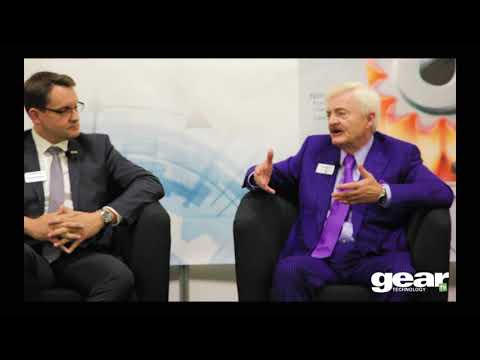