This method of testing large gearboxes or, indeed, any power transmission element, had numerous advantages and offers the possibility of large savings in time, energy, and plant, if the overall situation is conducive to its use. This usually requires that several such units need to be tested, and that they can be conveniently connected to each to each other in such a way as to form a closed-loop drive train. No power sink is required, and the drive input system has only to make up power losses. The level of circulating power is controlled by the torque, which is applied statically during rotation, and the drive speed. Principles, advantage, and limitations are described, together with recent experiences in the only known large-scale usage of this technique in Australia.

Question: What is functional measurement and what is the best method for getting truthful answers?

Nondestructive examination (NDE) of ferrous and nonferrous materials has long proved an effective maintenance and anomaly characterization tool for many industries. Recent research has expanded its applicability to include the inspection of large, open gear drives. Difficulties inherent in other NDE methods make them time-consuming and labor-intensive. They also present the user with the environmental problem of the disposal of used oil. The eddy current method addresses these problems.

11 Do No Destructive Testing (January/February 2013)

An overview of nondestructive testing and its importance in the manufacture of big gears.

The purpose of this paper was to verify, when using an oil debris sensor, that accumulated mass predicts gear pitting damage and to identify a method to set threshold limits for damaged gears.

This paper introduces mandatory improvements in design, manufacturing and inspection - from material elaboration to final machining - with special focus on today's large and powerful gearing.

I have heard that X-ray diffraction does not tell the whole story and that I should really run a fatigue test. I understand this may be the best way, but is there another method that gives a high degree of confidence in the residual stress measurement?

19 What Is Runout, And Why Should I Worry About It (January/February 1991)

21 The Uses and Limitations of Transmission Error (July/August 1988)

The concept of "transmission error" is relatively new and stems from research work in the late 1950s by Gregory, Harris and Munro,(1) together with the need to check the accuracy of gear cutting machines. The corresponding commercial "single flank" testing equipment became available in the 1960s, but it was not until about ten years ago that it became generally used, and only recently has it been possible to test reliably at full load and full speed.

This paper presents the results of research directed at measuring the total stress in a pair of statically loaded and carburized spur gears. Measurements were made to examine the change in total stress as a function of externally applied load and depth below the surface.

Gear specialists at the NASA Glenn Research facility helped determine it was safe for the space shuttle to fly again.

A single tooth bending (STB) test procedure has been developed to optimally map gear design parameters. Also, a test program on case-carburized, aerospace standard gears has been conceived and performed in order to appreciate the influence of various technological parameters on fatigue resistance and to draw the curve shape up to the gigacycle region.

Much of the information in this article has been extracted from an AGMA Technical Paper, &quot;What Single Flank Testing Can Do For You&quot;, presented in 1984 by the author

This paper presents the results of a study performed to measure the change in residual stress that results from the finish grinding of carburized gears. Residual stresses were measured in five gears using the x-ray diffraction equipment in the Large Specimen Residual Stress Facility at Oak Ridge National Laboratory.

Joe Arvin comments on his recent trip to Scandinavia and how U.S. defense dollars are being spent overseas. J.D. Smith responds to an article on gear noise from the previous issue.

This paper shows an experimental study on the fatigue lifetime of high-heat polyamide (Stanyl) gears running in oil at 140Â°C. Based on previous works (Refs. 1â€“2), an analysis is made correcting for tooth bending and calculating actual root stresses. A comparison with tensile bar fatigue data for the same materials at 140Â°C shows that a good correlation exists between gear fatigue data and tensile bar fatigue data. This insight provides a solid basis for gear designers to design plastic gears using actual material data.

Gear flank breakage can be observed on edge zone-hardened gears. It occurs, for example, on bevel gears for water turbines, on spur gears for wind energy converters and on single- and double-helical gears for other industrial applications.

Presumably, everyone who would be interested in this subject is already somewhat familiar with testing of gears by traditional means. Three types of gear inspection are in common use: 1) measurement of gear elements and relationships, 2) tooth contact pattern checks and 3) rolling composite checks. Single Flank testing falls into this last category, as does the more familiar Double Flank test.

It was very interesting to see Robert Smith's article on single-flank testing of gears...

Anyone involved in the design, manufacture and use of gears is concerned with three general characteristics relative to their application: noise, accuracy, and strength or surface durability. In the article, we will be dealing with probably the most aggravating of the group, gear noise. 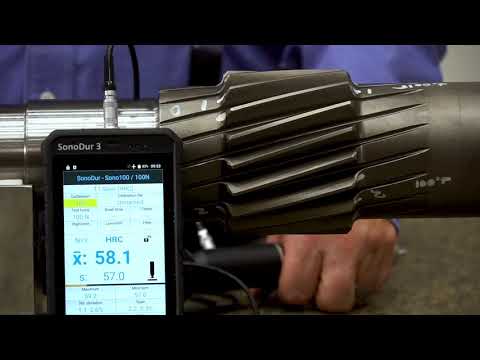