A single tooth bending (STB) test procedure has been developed to optimally map gear design parameters. Also, a test program on case-carburized, aerospace standard gears has been conceived and performed in order to appreciate the influence of various technological parameters on fatigue resistance and to draw the curve shape up to the gigacycle region.

In helicopter applications, the two-piece gear is typically joined by welding, bolts, or splines. In the case of the U.S. Army CH-47D Chinook helicopter, a decision was made to eliminate these joints through the use of integral design. Integral shaft spiral bevel gears must be designed such that the shaft does not interfere with gear tooth cutting and grinding. This paper discusses techniques to iterate in the design stage before manufacturing begins.

The design of any gearing system is a difficult, multifaceted process. When the system includes bevel gearing, the process is further complicated by the complex nature of the bevel gears themselves. In most cases, the design is based on an evaluation of the ratio required for the gear set, the overall envelope geometry, and the calculation of bending and contact stresses for the gear set to determine its load capacity. There are, however, a great many other parameters which must be addressed if the resultant gear system is to be truly optimum. A considerable body of data related to the optimal design of bevel gears has been developed by the aerospace gear design community in general and by the helicopter community in particular. This article provides a summary of just a few design guidelines based on these data in an effort to provide some guidance in the design of bevel gearing so that maximum capacity may be obtained. The following factors, which may not normally be considered in the usual design practice, are presented and discussed in outline form: Integrated gear/shaft/bearing systems Effects of rim thickness on gear tooth stresses Resonant response

10 Oil-Out Endurance Under the Lens (January/February 2017)

Aerospace manufacturing has seen quite a turnaround in the past few years. The world's manufacturers of airplanes, helicopters, missiles, space vehicles and satellites are all extremely busy right now--and that's keeping quite a few gear manufacturers busy as well.

A major source of helicopter cabin noise (which has been measured at over 100 decibels sound pressure level) is the gear box. Reduction of this noise is a NASA and U.S. Army goal.

A common design goal for gears in helicopter or turboprop power transmission is reduced weight. To help meet this goal, some gear designs use thin rims. Rims that are too thin, however, may lead to bending fatigue problems and cracks. The most common methods of gear design and analysis are based on standards published by the American Gear Manufacturers Association. Included in the standards are rating formulas for gear tooth bending to prevent crack initiation (Ref. 1). These standards can include the effect of rim thickness on tooth bending fatigue (Ref 2.). The standards, however, do not indicate the crack propagation path or the remaining life once a crack has started. Fracture mechanics has developed into a useful discipline for predicting strength and life of cracked structures.

Cubic boron nitride (CBN) finishing of carburized gearing has been shown to have certain economic and geometric advantages and, as a result, it has been applied to a wide variety of precision gears in many different applications. In critical applications such as aerospace drive systems, however, any new process must be carefully evaluated before it is used in a production application. Because of the advantages associated with this process, a test program was instituted to evaluate the load capacity of aerospace-quality gears finished by the CBN process as compared to geometrically identical gears finished by conventional grinding processes. This article presents a brief description of the CBN process, its advantages in an aerospace application, and the results of an extensive test program conducted by Boeing Helicopters (BH) aimed at an evaluation of the effects of this process on the scoring, surface durability, and bending fatigue properties of spur gears. In addition, the results of an x-ray diffraction study to determine the surface and subsurface residual stress distributions of both shot-peened and nonshot-peened CBN-ground gears as compared to similar conventionally ground gears are also presented.

In a little-known incident, Soviet machinists at Mil Helicopter worked in 1988 and 1989 on a special project to be used against Americans. 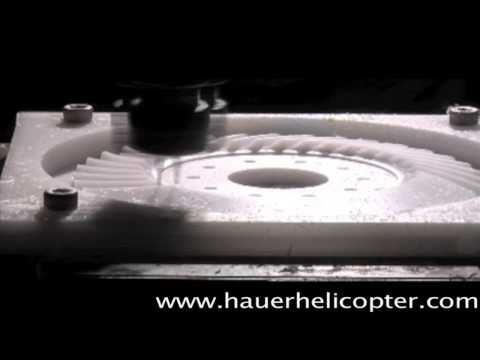