What is the relationship between angular backlash or mean normal backlash change and the axial movement of the ring gear in bevel and hypoid gears?

Flank breakage is common in a number of cylindrical and bevel gear applications. This paper introduces a relevant, physically based calculation method to evaluate flank breakage risk vs. pitting risk. Verification of this new method through testing is demonstrably shown.

In this installment of Ask the Expert, Dr. Stadtfeld describes the best methods for measuring backlash in bevel gears.

How the latest techniques and software enable faster spiral bevel and hypoid design and development.

Optimizing the running behavior of bevel and hypoid gears means improving both noise behavior and load carrying capacity. Since load deflections change the relative position of pinion and ring gear, the position of the contact pattern will depend on the torque. Different contact positions require local 3-D flank form optimizations for improving a gear set.

New freedom of motion available with CNC generators make possible improving tooth contact on bevel and hypoid gears. Mechanical machines by their nature are inflexible and require a special mechanism for every desired motion. These mechanisms are generally exotic and expensive. As a result, it was not until the introduction of CNC generators that engineers started exploring motion possibilities and their effect on tooth contact.

More strength, less noise. Those are two major demands on gears, including bevel and hypoid gears.

In this paper a new method for the introduction of optimal modifications into gear tooth surfaces - based on the optimal corrections of the profile and diameter of the head cutter, and optimal variation of machine tool settings for pinion and gear finishingâ€”is presented. The goal of these tooth modifications is the achievement of a more favorable load distribution and reduced transmission error. The method is applied to face milled and face hobbed hypoid gears.

What are the manufacturing methods used to make bevel gears used in automotive differentials?

Face-milled hypoid pinions produced by the three-cut, Fixed Setting system - where roughing is done on one machine and finishing for the concave-OB and convex-IB tooth flanks is done on separate machines with different setups - are still in widespread use today.

The calculation begins with the computation of the ring gear blank data. The geometrically relevant parameters are shown in Figure 1. The position of the teeth relative to the blank coordinate system of a bevel gear blank is satisfactorily defined with...

Ground bevel and hypoid gears have a designed motion error that defines parts of their NVH behavior. The surface structure is defined by the hard finishing process.

42 Prototyping on Bevel Gear Cutting and Grinding Machines (May 2020)

1 KISSsoft Implements Bevel and Hypoid Gear Calculations (July 26, 2018)
In the ISO Committee, the scuffing load capacity calculation for bevel and hypoid gears is currently in draft form, and has been implemen... Read News 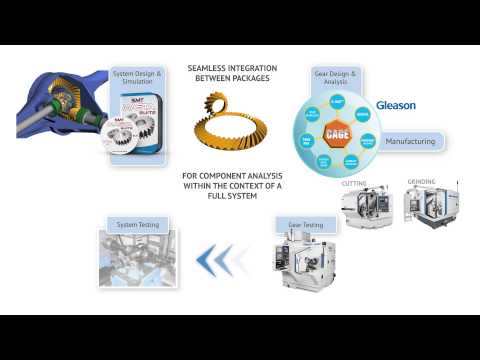