The 130SV shaving machine from Gleason is the newest of the company's Genesis family of gear production equipment.

Due to its economical efficiency, the gear shaving process is a widely used process for soft finishing of gears. A simulation technique allows optimization of the process.

4 Gear Finishing by Shaving, Rolling and Honing, Part I (March/April 1992)

6 The Process of Gear Shaving (January/February 1986)

The Raso 200 Dynamic has been developed to offer all the characteristics of a gear shaving machine with a competitive price.

Jules Kish responds to comments about his article on finding a hunting ratio, and Dr. Sante Basili argues that shaving is still the best way to finish a rough-cut gear.

One of the most frequently neglected areas of gear design is the determination of "form diameter". Form diameter is that diameter which specifies the transition point between the usable involute profile and the fillet of the tooth. Defining this point is important to prevent interference with the tip of the mating gear teeth and to enable proper preshave machining when the gear is to be finished with a shaving operation.

Profitable hard machining of tooth flanks in mass production has now become possible thanks to a number of newly developed production methods. As used so far, the advantages of hard machining over green shaving or rolling are the elaborately modified tooth flanks are produced with a scatter of close manufacturing tolerances. Apart from an increase of load capacity, the chief aim is to solve the complex problem of reducing the noise generation by load-conditioned kinematic modifications of the tooth mesh. In Part II, we shall deal with operating sequences and machining results and with gear noise problems.

3 Sicmat Releases Raso 200 Dynamic Shaving Machine (November 10, 2011)
The Raso 200 Dynamic has been developed to offer all the characteristics of a gear shaving machine with a competitive price. With a footp... Read News 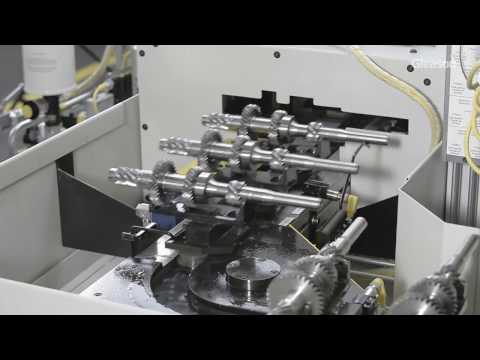 Comtorgage Corporation
Comtorgage Corporation manufactures a variety of hand-held, indicating gages (analog or digital) designed and built to measure various characteristics of machined, molded, forged, and pressed parts. Comtorgages are intended for use on the shop floor, or in the lab, wherever there is a requirement for frequent, and accurate monitoring of specific dimensions, with or without data collection.