Management Summary
Transmission error (TE) is recognized as one of the most important causes of gear acoustic emissions. There are many ways to reduce it in the design of the gear teeth, but the effectiveness of any action needs to be validated through experimentation with real parts. In this paper, a test rig for TE measurement is described and some TE experimental measures are discussed.

Introduction
According to Munro (Ref. 1), the idea of “transmission error” was introduced first by Harris (1958) and, some years later, by Niemann and Baethge.

Nevertheless, before the analytic definition of TE, it was universally recognized that tooth deformation under load during mesh affects the meshing kinematics, thus causing impacts between mating teeth, which are the main source of the acoustic emission of the transmission. Profile modifications (e.g., “K profiles”) were born from this recognition and are widely applied today, but these modifications are often based on empirical rules, or they are selected according to similar successful experiences. Therefore, the practice of applying profile modifications to reduce gear noise and vibration was introduced before the definition of TE, as confirmed by papers in the 1940s by H. Walker and D.W. Dudley, who proposed to use it “to reduce noise, friction and wear” (Refs. 2–5).

Today there are many theoretical and computational tools which can predict the transmission error of a gear during the design stage. These tools allow the designer to introduce appropriate profile modifications to reduce TE, not empirically, but on the basis of consolidated theories.

Nevertheless a precise correlation between gear TE and noise is still lacking, and much research continues because of the great number of phenomena involved. Due to the unavoidable approximations introduced by numerical models and to the difficulties in reproducing the desired tooth profile through machining processes, it is not easy to choose the best modification for decreasing acoustic emission.

In order to develop a theoretical model closer to reality, experimental tests are necessary to understand why sometimes profile modifications, designed to reduce noise, have such different effects from those predicted.

What is Transmission Error?
Let us consider the driven gear of a set: TE is the difference between its actual position and that corresponding to the ideal case of perfect meshing conditions (Refs. 1, 6).

There are many reasons for the presence of TE in gears. One is unavoidable: gears are subject to torques, which cause forces on teeth, thus modifying their geometry by bending.

Another unavoidable effect, which would exist even if tooth deflections were negligible, results from machining errors (profile and pitch error, eccentricity, etc.) and assembling errors, which modify the ideal geometry of the gear.

Therefore real teeth—deformed under load, affected by machining and mounting errors—are subject to different working conditions from the ideal ones. In particular, the different geometry of the teeth at the beginning of the mesh causes impacts.

Transmission error is the indicator of all these effects and is defined in this way:


The measure of TE is complex, not only because it is influenced by many factors, but also because it is often very small. For this reason, it is necessary to have very accurate measurement instruments, and also a test rig which allows the isolation of TE from all other phenomena. This enables the measurement of TE caused only by meshing, without the influence of other effects like compliances, manufacturing and assembling errors of the test rig, drive irregularities, dynamic effects, etc.

Test Rig and Measurement System
The most important feature of a test rig for TE measurement is stiffness: torsion and bending stiffness of the shafts, stiffness of bearings and of the casing.

If the stiffness of all these parts is much greater than that of the elements involved in meshing (teeth and gear blank stiffness), we can see and measure the phenomenon in its “pure” form. But if the parts of the test rig have stiffness of the same magnitude, many effects mix together and influence the final measure. Thus the results are not easily interpreted, and the TE is difficult to evaluate quantitatively.

A test rig specifically designed to measure TE has been constructed by the authors, with the aim of obtaining the maximum stiffness compatible with the dimensions of the layout of the test rig. Its features are described in Reference 7. The most important characteristics are the following:

• Three-phase asynchronous motor controlled by inverter, with maximum power of 100 kW, maximum torque of 500 Nm and maximum speed of 3,800 rpm.

A schematic and photo of the test rig are shown in Figures 1 and 2. Gears are mounted overhung to allow a quick setup, but the overhang is kept as low as allowed by the gear face width and bearing dimensions. The shafts are supported by two heads, which can be positioned and adjusted in any direction on the support plane. In this way, it is possible to set the desired center distance, with the limits defined in the design step, and misalignments, both in the plane of the shaft axes and in the orthogonal one. The misalignment in the plane of the axes is driven by a pin centered on the gear middle face, while the misalignment in the orthogonal plane is set by means of shims; appropriate reference marks, machined during the manufacturing, allow an accurate measurement of the position. 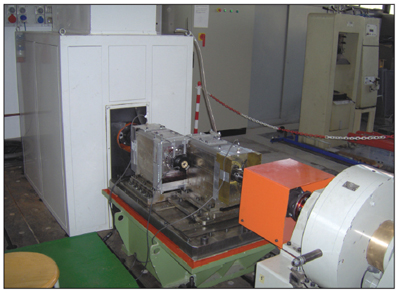 As explained in a previous paper (Ref. 8), the TE measurement system designed for this test rig is based on optical encoders, chosen for their high accuracy and preferred to other measurement systems based on radial and tangential accelerometers. The two encoders measure gear positions è1 and è2; these measurements, properly elaborated, let us calculate TE.

On the basis of the TE definition, its measure requires the independent measurement of the two angles è1 and è2. It is fundamental that errors and measurement uncertainty are lower than quantities to be measured. Since the TE of high-quality gears (those generally involved in applications which need this kind of measurement) amounts to seconds of a degree, the measurement system must have a higher degree of precision.

For this reason, two high-resolution Heidenhain encoders with 18,000 divisions have been chosen. The high number of angular divisions enables a high resolution. One angular division corresponds to 72" of degree, and it can be further divided if the acquisition system can identify, without aliasing, the sinusoid generated by the encoder corresponding to the passage of an incision. This involves an upper threshold of drive shaft angular velocity, which depends on the maximum acquisition frequency of the used data acquisition board. Signals are acquired along with a reference phasing signal, which enables the correlation of the angular positions of the two gears, which in turn allows the creation of TE diagrams, always starting from the same meshing teeth of pinion and wheel. 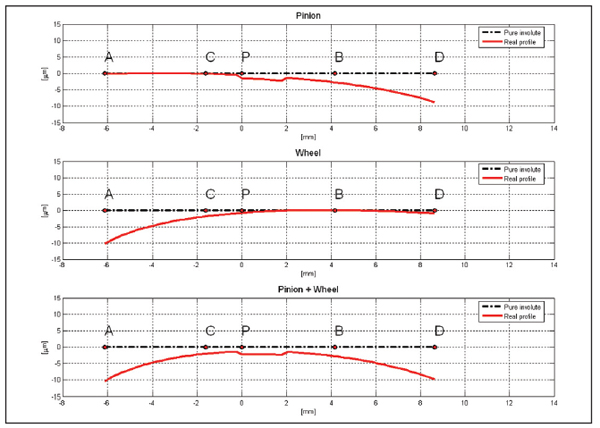 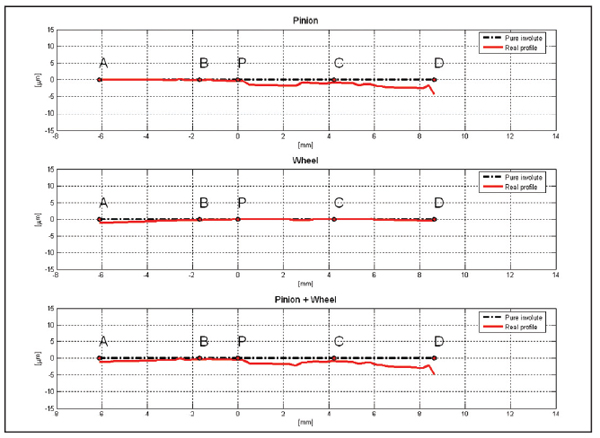 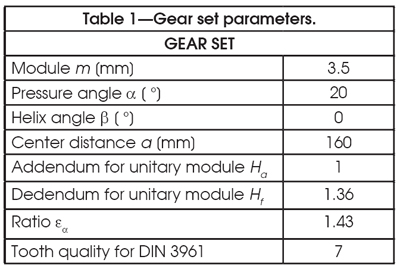 The manufacturing process of the gears is the following:

5. Grinding of the hole and of the reference axial plane, with a single positioning on the machine and using the gear teeth as reference.

The signals are acquired by the two encoders and, after the elaboration of the signals by means of a specially developed software program, TE diagrams are calculated.

Figure 5 shows TE measured on the first gear set (with profile modification) as a function of pinion position and applied torque. We can clearly see that measured TE has the two typical components: a constant one, growing with the applied torque (because it corresponds to gear tooth mean deflection under load) and a variable one, corresponding to stiffness variation and manufacturing errors. 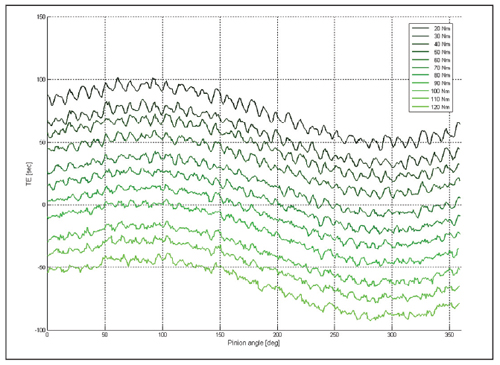 By virtue of a frequency spectrum that has been calculated for every TE measurement (Fig. 6), we can recognize the different components of the signal: the low-frequency harmonic (one per revolution) caused by gear eccentricity, the harmonic at mesh frequency with its multiples, and spectral components at lower frequencies than mesh frequency. 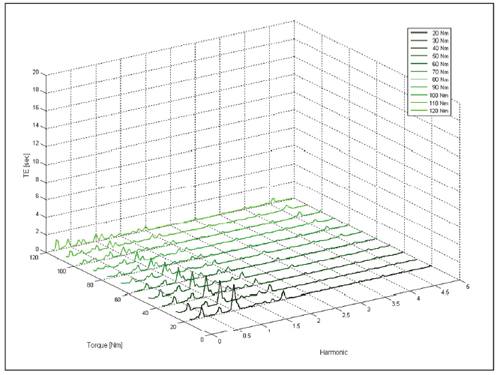 The amplitude of the first spectral component (mesh frequency) depends on applied torque, as we can clearly see in Figure 7. Therefore, an accurate study of profile modifications can reduce TE in correspondence with a chosen value of applied torque, reducing acoustic emission at the source. 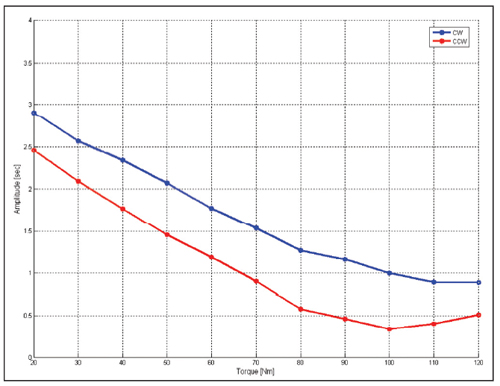 Noise measurements on the same gear set considered for TE are shown in Figure 8. We can see a close correlation between sound pressure level (SPL) and TE in that the torque values that minimize TE also minimize acoustic emission. 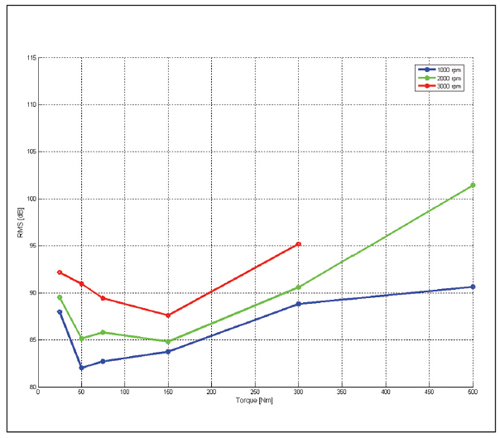 If we plot SPL spectrum at a given torque at different motor speeds (Fig. 9), we can see mesh frequency and its multiples shifting on the frequency axis. These diagrams are also called “waterfall” diagrams. 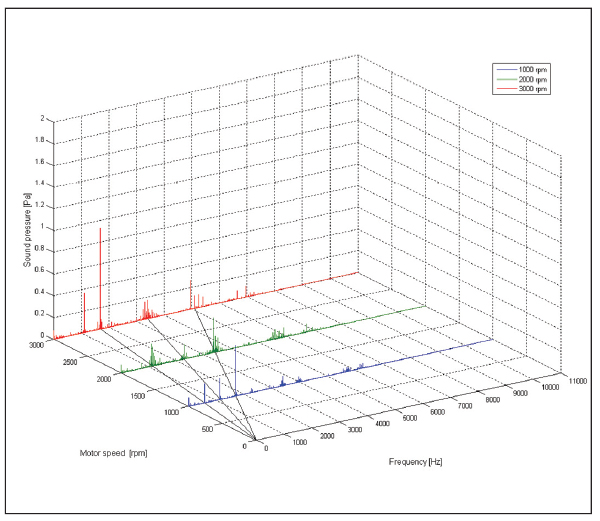 By properly filtering the SPL signals (Fig. 10), we can highlight the phenomenon of sidebands, which consists of harmonics at the following frequencies: 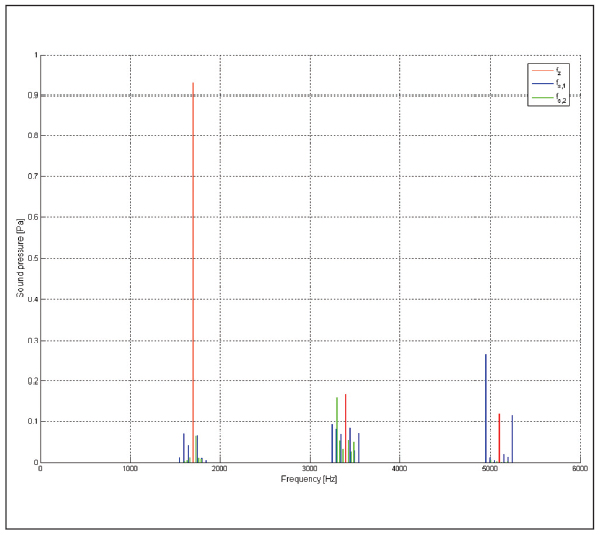 The same measurement procedure has been applied to the second gear set, but with no profile modification. SPL values are shown in Figure 12. We can clearly see that acoustic emission increases linearly with applied torque, and its trend follows that of the amplitude of the harmonic at mesh frequency (Fig. 11), as observed for the first tested gear. 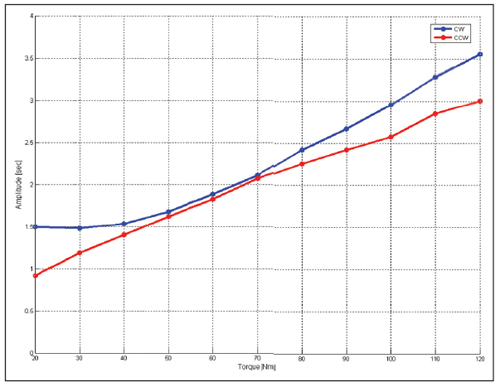 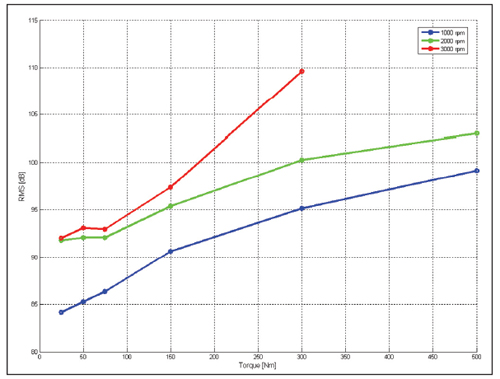 Conclusions
Measuring TE is necessary to validate profile modifications, defined during the design phase, in order to reduce acoustic emission. TE measurement is complex and requires an appropriate test rig; otherwise experimental results can be influenced by other phenomena, which can hide the component due to tooth deformation.

On the basis of an accurate analysis of the experimental results—and with the help of theoretical simulations—profile modifications can be improved, allowing for a solution that minimizes TE at the desired torque.

A mix of theoretical simulation and experimental validation seems to be the right way to design quieter gears and transmissions.

Dr. Francesco Rosa is an assistant professor at the department of mechanical engineering, Politecnico di Milano (Italy). His research topics include methods and tools for geometric modeling of gears, simulations of manufacturing technologies, and simulations of component behavior in actual working conditions.

Giuseppe Boni is a senior gear designer at Dana Heavy Vehicle Technologies and Systems—Europe, located in Italy. He joined Dana in 2003, after working at ZF Marine.