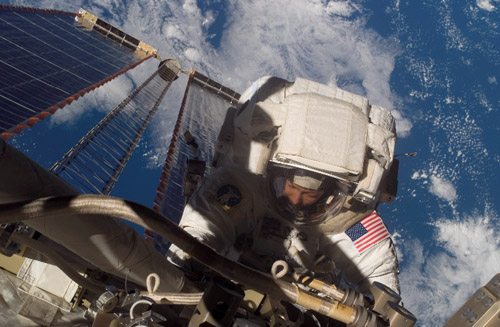 Shuttle Discovery flight engineer Daniel Tani during a more than 6-hour spacewalk dedicated in part to an inspection of the International Space Station’s malfunctioning Solar Alpha Rotary Joint (SARJ). Tani returned to the station with metal “shavings,” samples of an as yet unknown origin gleaned from beneath the joint’s multi-layered insulation covers.

Since last October, NASA engineers on the ground, as well as International Space Station (ISS) and shuttle Discovery astronauts, have been working to indentify and rectify an ongoing problem with one of the two solar array panels that power the station’s energy system. The area of concern is one panel’s two 10-foot-wide bull gears, fitted with two redundant-drive motors, or drivelock assemblies (DLA). Together, they comprise one SARJ—or solar alpha rotary joint—in the power truss that serves to direct the massive starboard solar panels towards the sun. Only one DLA is needed at any time to power the outboard bull gear. The other panel is problem-free. While at this writing a root cause remains elusive, the problem does not present any imminent danger to the crew or station, according to NASA. That’s because despite what NASA SARJ recovery team leader Kevin Window characterizes as a “major anomaly,” both solar panels can still be maneuvered, if necessary. In other words, the motor and/or bearings that power the panel in question have not seized and are therefore operational, if only manually for the time being.

After ruling out possible meteor damage, the investigation continues both in space and on the ground at the Johnson Space Center (JSC) facility in Houston. ISS station commander Peggy Whitson and flight engineer Daniel Tani, along with lead and fellow spacewalkers Scott Parazynski and Doug Wheelock, respectively, have led the space-borne investigation while Window coordinates earthbound testing.

Bad vibes a concern. Flight control first became aware there was a problem when ground personnel noticed unwarranted vibration during the affected panel’s rotation. A surge in the panel’s power mechanism was also detected. As a result, space walks and other activities planned for the ISS and Discovery crews were put on hold until it was determined that the problem was not life-threatening. Subsequent inspections by crew members ultimately revealed the presence of an unidentified grit—believed to be metal shavings—in the 12-set, trundle bearings gear race. Using swatches of tape, samples were collected from the surface by astronaut Tani. According to NASA, the debris could be causing the power surge which, if not controlled, can cause major damage to the SARJ unit. The samples were delivered to JSC courtesy of the Discovery STS-120 crew upon their recent return to Earth on November 7. 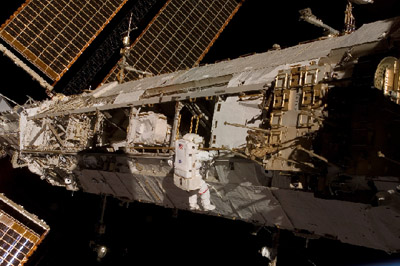 Expedition 16 shuttle Discovery commander Peggy A. Whitson (above) was also involved in the spacewalk investigation of the ISS solar array’s (top and next page) faulty SARJ unit. She is seen here examining the damaged starboard component.

Window is faced with the challenge of trial-and-error simulation and other life-testing protocols. He has generated what is known as a fault tree that hopefully serves to facilitate fault and potential root cause analysis.

“We have a couple things to work with,” Window says. “We have the structural test article, which is the SARJ with its internal bearings and DLA mounted to it that was utilized for the life testing of the (component). So we have that on the ground, and the other thing we have is the contractors (Lockheed-Boeing) that designed and developed the SARJ.” Window adds that Lockheed is spearheading the development of a test rig that will best simulate on the ground what might be going on with the unit up at the space station. Window says it is a “wild guess at this point” as to why exactly the problem exists.

To date, however, Window says the inspected samples collected in space show debris on the nitrided layer of the race ring, which is where the flaking is occurring, perhaps ruling out bearing and or gear degradation. He cautions, though, that seized bearings have not been ruled out.

As for the gears, “From inspections we have been able to perform at this point, we have not seen any gear teeth degradation or that anything looking like the drivelock assembly bull gear is causing any type of damage to the gear teeth or the raceway.”

Knowing what they don’t know. As for what has in fact been observed, Window explains. 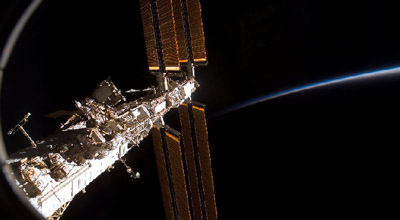 “We have seen in our analysis of the witness coupon (sample) that there is what we call a subsurface networking and cracking in that nitride layer. And what that means is that when you go through the heat treating process of the nitride, what it appears at least in the coupons we have analyzed is that there are areas in that layer in which the molecules didn’t completely bond, and that’s causing the networking and cracking.” Given that, the recovery team is at this point looking closely at whether the heat treat process was compromised in some way.

Additionally, Window says, “The other thing we believe we’re seeing is a potential castoring effect of the bearings in which the bearings are sliding and then trying to guide back (into position). And that of course increases surface friction; that could be a contributor as well.”

Also under consideration as potential root causes are lubrication and defective steel. And although there is no “wet” lubrication on the bearings surface in question—the roller bearings are gold plated—engineers and tribologists at the NASA Glenn Research Center in Cleveland have been brought into the mix to determine whether the addition of a wet lube might enhance performance, even for just the short term.

As for the steel, Window says, “For now, it is believed that all of the race rings developed went through the exact same process. When you have the port side (where the second SARJ and panel are located) that hasn’t seen this problem, it makes one wonder.”

For now, testing continues as Window and his team attempt to configure testing and analysis in as close an apples-to-apples scenario as possible in order to isolate a root cause and corrective action.