Why forging technology is changing while also staying exactly the same

The process of forging metal into shapes possesses a surprisingly long and storied history.

For example, the method of hot rolling can trace its protracted existence all the way back to an enigmatic Italian polymath named Leonardo da Vinci (you may have heard of him), who reportedly invented the rolling mill one lazy day in the 1400s.

And in the centuries that followed the glory days of the Renaissance — when the idea of a rolling mill sprung from da Vinci's head among other scattered works of genius like armored vehicles, flying machines and the Mona Lisa (you may have heard of it) — the method used to roll metal has…stayed almost exactly the same.

"The process has remained most - ly unchanged for about 250 years," says Wil Kantus, vice president of operations at Ajax Rolled Rings (York, SC).

Apparently, there's nothing to see here. Move along. Run home to your history books, flip to Chapter One and read of the brawny early humans who would wallop an anvil with a hammer to force pieces of iron to bend against their will — that right there was the pinnacle of forging technology.

See, the inherent problem with finding innovations in the forging process lies in its simplicity.

Metalworking, in some rudimentary form or another, has been around almost as long as humans have stood upright. So here's a question for the anthropologists out there:

When was the last major breakthrough in bipedal movement? How about eating? Sleeping? Breathing? 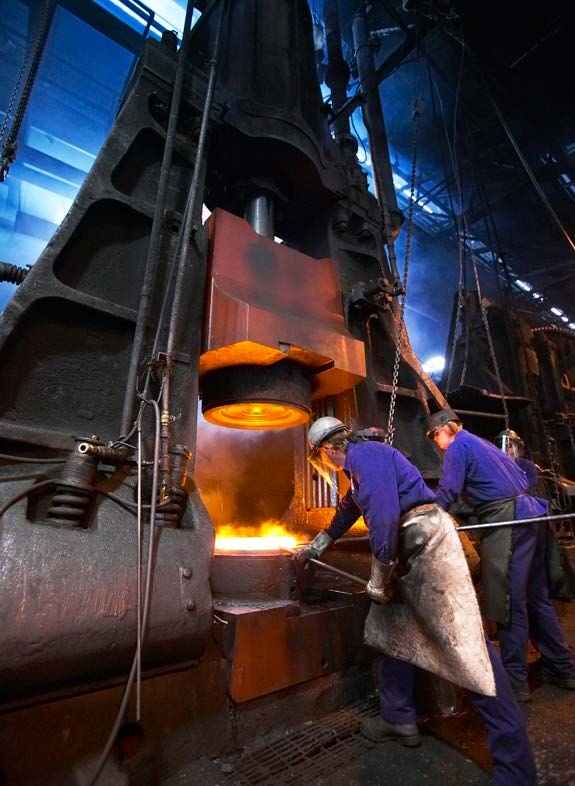 That's the rub. Producing forgings is a vital procedure in the industrial word, no doubt — but it's also a fairly barebones operation.

Not a whole lot of room for growth, right?

Bud Kinney says not so fast.

"There have been recent innovations," says Kinney, vice president of sales of the IMT Forge Group. "We are actively pursuing new innovations which would include merging forging and heat treating that would produce material properties that cannot be achieved any other way. That's our goal. We are really trying to be on the cutting edge."

"I'm sure [Kantus] is right, and I'm also sure that I'm right. Both statements are true."

Now, if you feel like you just fell down a flight of steps built by M.C. Escher, it's just because what Kinney said is pure paradox. It's simply not possible for forging to be progressing while at the same time not changing.

Kinney says it is. Kantus says it's not. Who should you believe?

To even begin to dissect this paradoxical problem, it would be of great use to first understand the basics.

production. The [forged] form is made as close as possible to the finish contour of the part to reduce machining time and to keep the amount of wasted material low. Forging tolerances are [commonly] held within ±0.030" (0.8 mm) and machining stock allowance is in the range of 0.080 to 0.120 per side. The surface finish of forged surfaces [for steel parts] is around 500 micro-inches.

"The advantages of forgings include: [shortened] machining times, as the raw material is shaped close to the final contour of the part and excess material can usually be removed in a single [operation], thus less machining and nonfunctional surfaces do not require machining."

And it was published in an issue of Gear Technology in 1992. Seems impossible that almost 25 years have gone by and key data remains totally untouched, but here we are. Of course, none of this is to say staying the course is a bad thing. Some great things remain steadfast and constant through the years, stubbornly defiant in the face of Father Time himself.

There can be elegance in simplicity, after all. And, by most accounts, creating forgings is just that. 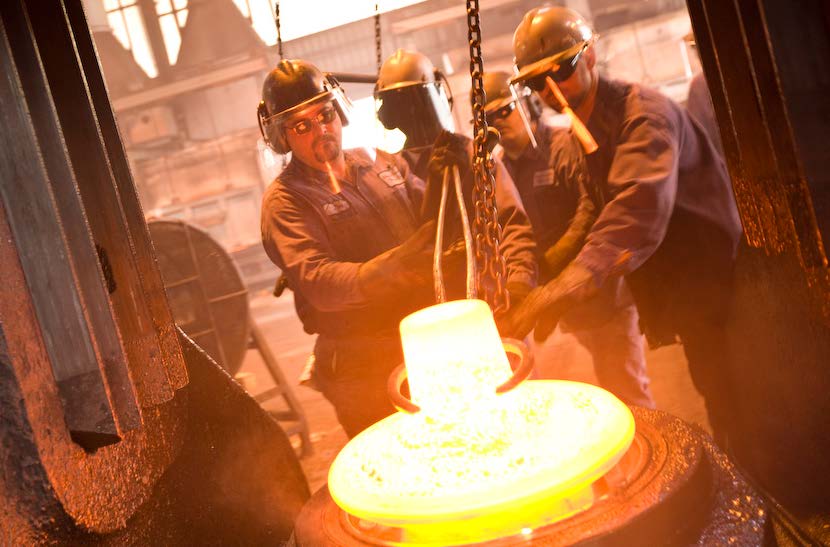 "The process looks very simple," Kantus said of Ajax's method of making rolled rings. "We start out with bar material and we cut it to a weight, and then we forge it into a pre-form so it looks like a donut. That then goes on a rolling mill where you can roll it out to the required dimensions. Then most of them go to heat treat and then machining.

Each area has dedicated furnaces, blanking presses and material handling equipment located and optimally sized to provide the mills with hot metal in the most efficient manner possible." Rolled rings, which both Ajax and McInnes specialize in, are a unique type of forging that offer a distinct set of pros and cons when compared to products made from die forging, the process that Clifford-Jacobs uses.

Clifford-Jacobs Forging (Champaign, IL), a company owned by IMT that produces steel forgings for the mining, gear, aerospace, energy, and defense industries, normally makes its forgings from special bar-quality steel. As steel bars are rolled, the grain structure within the steel is forced to flow along the centerline of the bar. When a standard or custom forging is produced from the bar, this inherent grain flow bends to follow the contour of the forged shape.

"In some cases, we actually use pre-forms," Kinney says. "We produce more near net products than, in most cases, a rolled ring could produce. We actually could use a rolled ring as a preform for what we do. That's really what, in a sense, differentiates us. [IMT] has a lot of companies, but Clifford-Jacobs is probably our premier company on the gear side."

O'Brien adds:
"For gears or bearings with a basic OD × ID × height geometry, seamless rolled rings provide the best of all forging options," he says. "There are a wide variety of ring mills in terms of size and control technology. The latest in ring rolling technology enables quick set-up times, minimal stock allowances and size consistency from ring to ring." 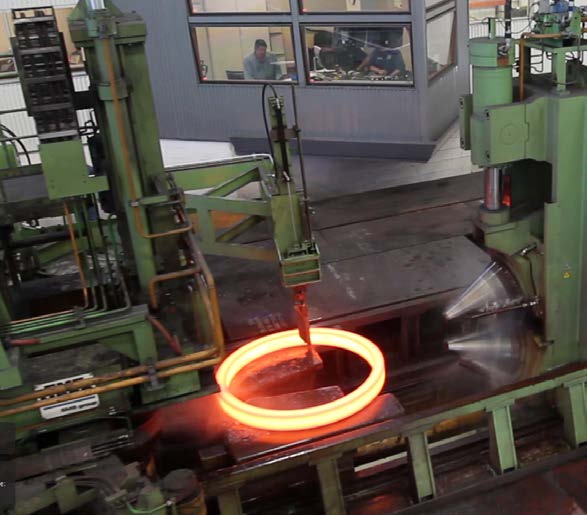 So, as O'Brien clearly states, the process for making forgings hasn't changed in — wait what?

The latest in ring rolling technology.

Somewhere at Château d'Amboise da Vinci is rolling over in his grave.

To truly understand the forgings paradox you must first realize that preservation and change aren't always mutually exclusive.

It is possible, for instance, to make alterations to a car without completely transforming the car into an entirely new entity (though detractors of the "Ship of Theseus" thought experiment would argue differently, but that's a paradox for a different day).

Such is the case with creating forgings — the process is fundamentally the same, there have just been a few recent upgrades.

"While forging as a process remains quite similar to what was done generations ago, the application of engineered innovations such as direct-from-forge-heat-treating makes it considerably more efficient and effective today," Kinney says.

Forgers and ring rollers aren't trying to reinvent the wheel, so to speak. They're simply trying to make the wheel easier to produce and easier to use.

"There have been a lot of innovations in the press and forging market to use modeling and simulation to give you better results," Kinney says. "We're really immersed in that process — giving you a better idea of the grain flow and what the final near net part is going to look like. 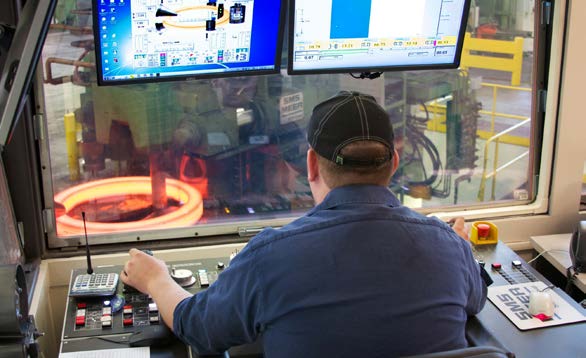 "Specific to Clifford-Jacobs, we are also involved in development work with SCRA (South Carolina Research Authority) to produce what we call direct forge intensively quenched parts that we believe will be a game-changing approach to the forging and heat treating process. It's a development project that's underway, but our goal is to better integrate forging and heat treating to produce superior parts. We're really excited about that."

For companies that specialize in rolled rings, like McInnes and Ajax, innovation has come in the form of newer machinery and more advanced, intuitive software. "It's like comparing a car being manufactured a decade ago to now," O'Brien says. "You didn't have XM Radio but you had radio — is it really different if the music is still coming out? "A lot of the difference is user interface and how much more you're able to rely on technology. That's not to say the operator's experience isn't valuable, but if you combine an experienced operator with the newest technology, then the horsepower behind it is that much greater.

"The hydraulics, the frame upon which they sit, the method of forging, that all remains the same. It's kind of the ‘sheet music' that's different — the software, the computerized rolling methods, et cetera. The newer the machine the latest you have in terms of that. 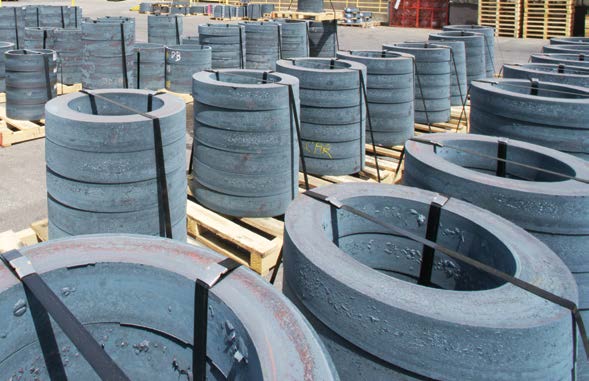 "Newer is better in terms of control, user interface and maintenance diagnostics."

For gear manufacturers, the main cause for concern isn't necessarily how easy it is to make the forgings — nor should it be — but in the quality of the forgings once they're made.

And the good news for buyers of forgings and rolled rings is that besides being more quickly and efficiently made than ever before from a supplier's perspective, they're also produced at a higher quality, and more consistently so.

"The percentage of rings that are within your nominal size range are going to be better over time," O'Brien says. "If it's a manual controlled mill, you're going to have inconsistencies from piece to piece. Within a single job, a computer controlled mill is going to be putting out the same piece consistently.

"I think [the difference is] repeatability, consistency, and you're going have tighter tolerances and less allowance."

And with that, the paradox that began tangentially with da Vinci hundreds of years ago becomes less of a riddle and more of minor problem solved by good old fashioned persistence and ingenuity.

Now if we can just get da Vinci to tell us where that darn Holy Grail is.

How Do You Say Gears in Italian