Reshoring offers an opportunity for increased domestic gear production. Reshoring is growing at a steady pace in most industries, and is particularly strong in the gear intensive industries such as automotive, aerospace and construction equipment (Table 1). This article provides background on the overall trend and tools for the gear buyer and the gear producer to make the offshore vs. domestic decision. The same logic and tools apply to all countries. Many companies are adopting a localization strategy, producing locally most of what is consumed in each country or region. So, for international readers, the recent U.S. experience is a model that can be adopted locally.

The Reshoring Initiative presented to the AGMA and ABMA Annual Meeting on May 1, 2015, and administered a poll asking attendees: “In the past 3 years have you or your customers relocated jobs back to North America?” Fifty-four percent of attendees replied “Yes.” We have not seen such a high response in any other of the hundreds of industry groups we have addressed. The positive response is highly relevant to the Initiative’s primary goal: to eliminate the U.S. manufactured goods trade deficit of $500 to $600 billion/year.

AGMA provided a spreadsheet prepared by IHS Economics from data supplied by AGMA, the U.S. Census Bureau and U.S. government foreign trade data. We concluded that in 2014 domestic gear production, excluding automotive gears, equaled about 70% of the domestic consumption of gears. Balancing the U.S. trade deficit in gears would increase domestic gear production by approximately 50%. 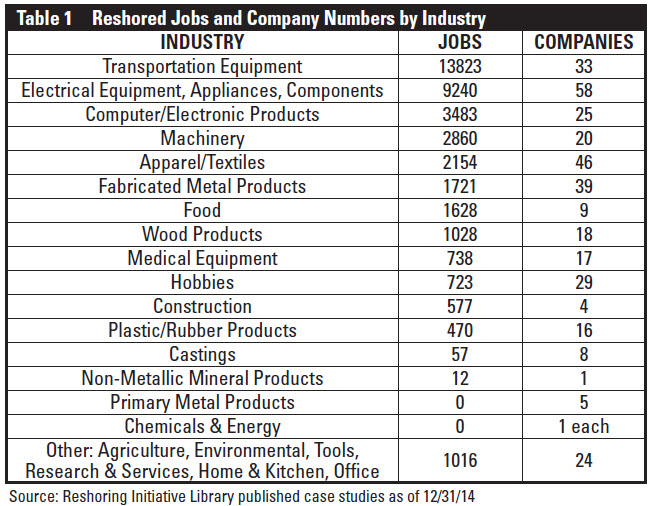 Background and Drivers of the Trend

In 2014 more than 60,000 manufacturing jobs were brought to the United States by reshoring and foreign direct investment (FDI) combined, representing a 400 percent increase since the height of the offshoring trend around 2003, and the first net positive job number in decades (Table 2).

Overall there are three main drivers of the reshoring trend. First are rising offshore wage rates. Second is an increased recognition of the previously ignored costs, risks and strategic impacts of offshoring. This recognition is enabled by the use of the refined metrics of total cost of ownership (TCO) to quantify these factors. Third is a reduction of costs through sustainable strategies such as design for manufacturability, innovation, automation and lean.

Using TCO is the first step a company should take when evaluating sourcing options. TCO is defined as the total of all relevant costs associated with making or sourcing a product domestically or offshore. TCO includes current period costs and best estimates of relevant future costs, risks and strategic impacts. TCO analysis helps companies objectively quantify, forecast and minimize total cost. It takes into account transportation costs, travel expense and time, carrying cost of inventory, warranty, IP loss, impact on product innovation, and many other factors such as those associated with the risk of supply chain shocks or disruptions caused by natural disasters, political unrest and dock slowdowns. It also helps to forecast the future impact of wage and currency changes.

Much of companies’ efforts to deal with complex global supply chains is eliminated or drastically reduced by reshoring. Longer-term forecasting, monitoring of suppliers and regulatory compliance offshore is found to be waste when measured against the use of proven, local suppliers.

The not-for-profit Reshoring Initiative offers the free TCO Estimator, available on reshorenow.org. The initiative offers many resources to help companies make sourcing decisions (Table 3). Reshoring tools can also be used by gear salesmen to convince customers of the benefit of sourcing domestically, especially for custom gears.

Below are some examples of gear makers who have chosen U.S. production or sourcing over offshore.

The Reshoring Initiative publishes data (Ref. 3) annually to show that the current trend in manufacturing for the United States market is to source domestically. With 3–4 million manufacturing jobs still offshore, we see huge potential for even more growth and hope this data will motivate more companies to reevaluate their sourcing and site selection decisions. Making better-informed decisions through the use of TCO and gaining a competitive advantage through sustainable strategies will enable U.S. companies to locate more manufacturing closer to home and strengthen the U.S. economy.

We would like to build on the reshoring momentum achieved at the AGMA meeting. We have outlined (Table 3) our tools and programs that you can use. The best way to accelerate the trend is to document and promote the successful cases. Therefore, we especially encourage you to report the cases where you reshored, where you directly replaced an imported gear source or where your customer brought back product assembly and sourced gears from you. Reports can be made on our Case Studies feature. The resulting PDFs will be posted on the Reshoring Initiative website, and you can post on your site. Case submitters also receive a Manufacturing is Cool T-shirt, made in the USA of U.S. cotton.

Harry Moser founded the Reshoring Initiative to bring manufacturing jobs back to the United States after working for GF AgieCharmilles, starting as President in 1985 and retiring at the end of 2010 as Chairman Emeritus. Previously he worked for Disamatic U.S. for six years. Largely due to the success of the Reshoring Initiative, Harry was inducted into the Industry Week Manufacturing Hall of Fame 2010 and was named Quality Magazine’s Quality Professional of the Year for 2012. Moser participated actively in President Obama’s January 2012 Insourcing Forum at the White House, won the January 2013 The Economist debate on outsourcing and offshoring, and received the Manufacturing Leadership Council’s Industry Advocacy Award in 2014. He received a bachelor’s degree in mechanical engineering and a master’s degree in engineering from MIT in 1967, and he earned an MBA from the University of Chicago in 1981.