Due to increasing requirements regarding the vibrational behavior of automotive transmissions, it is necessary to develop reliable methods for noise evaluation and design optimization. Continuous research led to the development of an elaborate method for gear noise evaluation. The presented methodology enables the gear engineer to optimize the microgeometry with respect to robust manufacturing. 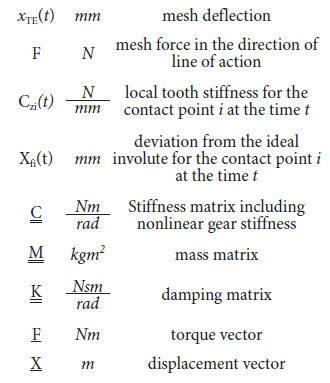 Because of success in the reduction of engine and wind noise, gear noise has become even more important. For an efficient design process, it is necessary to have calculational methods for gear noise prediction.

The main cause of gear noise is the mesh excitation resulting from the timevariant mesh stiffness and deviations from the ideal involute. Deviations are distinguished by design flank modifications and arbitrary manufacturing errors. The resulting flank topology is a complex geometry. The gear mesh excitation results in structure-borne noise from shafts, bearings and housing. Primary action to reduce gear noise is to reduce mesh excitation. A common way regarding mesh excitation is to calculate transmission error (Refs. 2, 8 and 5). A more detailed way regarding the dynamic behavior of the surrounding parts of gears is to calculate dynamic tooth force; in most of the literature only the nominal flank deviations are regarded.

At the Gear Research Center (FZG), ongoing investigation leads to a computer- based method for calculating transmission error and dynamic tooth force based on measured flank topology (Ref. 4); this method is used in a comparison with noise measurement for automotive transmissions. The presented methodology enables the gear engineer to optimize the microgeometry with respect to robust manufacturing.

The fundament of all mesh calculations is the accurate calculation of mesh stiffnesses in the mesh contact. According to Weber/Banaschek (Ref. 9) and Schmidt (Ref. 7), this stiffness can be calculated based on elastic beam and plate theory. In Figure 1 the abstract models are shown. For a special mesh position at the time t the points of contact are determined in a geometrical model (Fig. 1(a)). The line of contact is discretized to several calculation points with the index i. The model is then transferred into the mechanical substitute model in Figure 1(b), where the analytical plate deformation theory can be applied to solve the problem in form of a calculational model in Figure 1(c). The result of this calculation is the local tooth stiffness Czi(t) for all points i on a line of contact at time t. Alternatively there are several other methods to determine the mesh stiffness (e.g. FEM (Ref. 1) ), but the shown theory is well proved within more than 50 years of gear calculation and experimental testing. This theory is very fast and has been implemented in special software programs. For the assessment of the excitation behavior of gears based on the stiffness calculations, several methods are used to determine the excitation characteristics. The most important methods are the calculation of transmission error (static: n ⇒ 0) and dynamic calculations. For all these methods it is necessary to calculate the mesh condition in the full field of action with a sufficient resolution. In this case we calculated with at least 18 points on the line of contact for 60 different mesh positions-per-pitch for the static calculations and with about 150 to 250 different mesh positions-per-pitch for the dynamic cases.

Figure 1 Models for determination of local mesh stiffnessess Czi at the contact point (i = 1…n) for one special mesh position at the time t (acc. Weber/Banaschek (Ref. 9) and Schmidt (Ref. 7)).
- Click image to enlarge

Static calculation of mesh excitation. The transmission error is the variation of the deflection in the path of contact between pinion and wheel under load. It is calculated under static conditions for several meshing positions (n ⇒ 0). Therefore the transmission error does not contain dynamic effects and is independent of the dynamic behavior of the surrounding system. The transmission error xTE(t) as shown in Equation 1 can be calculated by using the local mesh stiffnesses Czi(t) at the points i and all flank deviations at the points xfi(t). In the deviations, the flank corrections, the deviations of manufacturing and the deflection of all shafts, bearings and housing were considered.

Dynamic tooth force calculation. The excitation from gear mesh can be optimized by flank corrections. The influence of load on the excitation can be calculated quickly. But the dynamic behavior of the gear box also depends on the rotational speed. To consider the influence of natural vibrations in the presented methodology lumped-mass torsional vibration systems are used. Because of the nonlinear gear stiffness function the equations of motion have to be solved by numerical integration. For each integration step the gear stiffness has to be calculated and the stiffness matrix C has to be built. Equation 2 represents the system of the equations of motion. It is a system of nonlinear differential equations of the second order; the damping of the gear mesh is also calculated. According to Gerber (Ref. 6), it is dependent on center distance, oil viscosity and speed.

Description of examined gear boxes. Two similar gearboxes have been analyzed with the aim of comparing and improving gear noise excitation. Both gearboxes (A and B) are automatic transmissions for vehicles with transverse motor configuration. One gear stage that is permanently engaged and critical in terms of mesh excitation has been analyzed in detail. Note that parts of the automated transmission, torque converter, planetary gear sets and several clutches, are not examined in this project. The power is transmitted by two stages, which are always engaged. These two stages are called counter gear stage and differential gear stage. In this project only the effect of counter gear stage is considered, as mentioned above.

Modelling of shafts, bearings and housing. For the gear noise calculation, it is important to capture the elastic environment of the gear wheels. The FVA Program RIKOR (Ref. 3), which provides load capacity calculations, considers the:

Transmission error. The calculation of transmission error has been done for both designed and measured microgeometry; the time-dependent curves were transformed into the frequency domain. In the generated spectra the exciting characteristics of the mesh could be analyzed properly. In Figures 4 and 5 the results are shown for the design microgeometry. 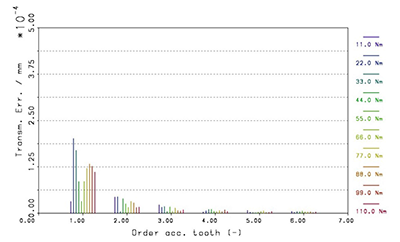 Figure 4 Transmission error with the designed microgeometry for gearbox A counter drive stage at different load.
- Click image to enlarge 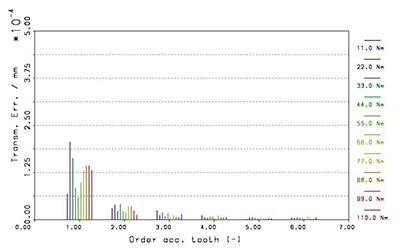 Figure 5 Transmission error with the designed microgeometry for gearbox B counter drivestage at different load.
- Click image to enlarge

Both gearboxes show comparable exciting characteristics. The amplitudes of transmission error are very low level from 0.03 μm to 0.2 μm for 1st order. The results of the transmission error calculation with measured microgeometry are shown in Figures 6 and 7; the calculation was done with the individual measured flank geometry for each tooth (no averaging). Because every tooth is different in this calculation, more orders are visible — not only integer orders. Therefore in the pictures of full order spectra (Figs. 6 and 7) there is shown only the shape of amplitudes, but no development of amplitudes of TE with increasing load (different colors). For this reason the details of the spectra are displayed in Figures 6 and 7. 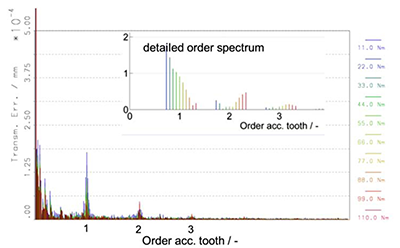 Figure 6 Transmission error with the measured microgeometry for gearbox A counter drivestage at different load.
- Click image to enlarge 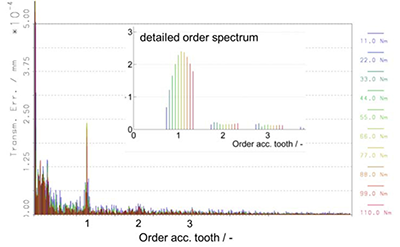 Figure 7 Transmission error with the measured microgeometry for gearbox B counter drivestage at different load.
- Click image to enlarge 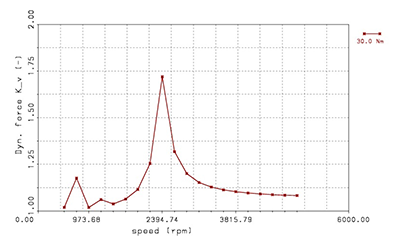 Figure 8 Resonance curve with designed microgeometry for gearbox A.
- Click image to enlarge 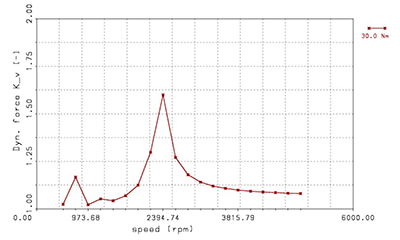 Figure 9 Resonance curve with designed microgeometry for gearbox B.
- Click image to enlarge 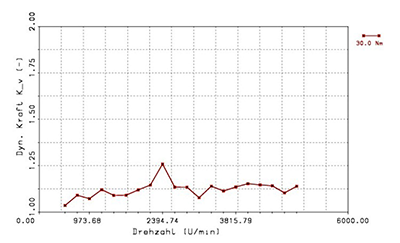 Figure 10 Resonance curve with measured microgeometry for gearbox A.
- Click image to enlarge 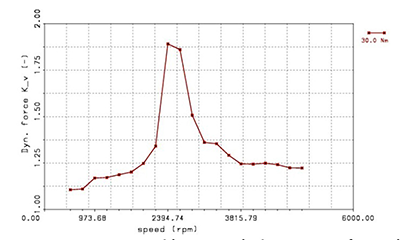 Figure 11 Resonance curve with measured microgeometry for gearbox B.
- Click image to enlarge

When comparing the transmission error with designed microgeometry and measured microgeometry, there are different statements between the gearbox A and B. Regarding gearbox A, the excitation of tooth order and its harmonics decreases down to 50% of the amplitudes at design microgeometry for high loads (see Figs. 4 and 6 details). Regarding gearbox B the excitation of tooth order and its harmonics increases to 150% of the amplitudes of design microgeometry (see Figs. 5 and 7 details). The amplitudes of transmission error with amounts of around 0.1 μm are very small and the manufacturing of the real gears will change the transmission error only by 0.1 μm to 0.2 μm. But in analyzing lower frequency excitation there can be seen some additional excitation due to manufacturing errors. This additional excitation at low frequencies is typical for calculation with measured microgeometry data. In this case the amplitudes of mesh excitation for very low order increase up to 3 times the value of 1st order of mesh excitation, and even the 0.3 mesh order gets an amount of 2 times 1st order amplitude. This effect leads to the assumption that manufacturing errors probably have significant influence on excitation and will excite some frequencies that are not in tooth frequency.

Noise measurement results. In the production facility, 100 gearboxes have been tested on their airborne noise behavior. Then the gearbox with the highest noise level was measured on the same test bench. The result of each type is shown in Figure 12. Gearbox A (Fig. 12(a)) has a broad frequency range of high noise behavior between 2,000 Hz and 2,500 Hz. For the gearbox B (Fig. 12(b)) there is shown a constant increasing noise behavior with higher frequency. Comparing the curves, the noise of gearbox B is ultimately higher than in gearbox A. This could be reproduced by calculations with the presented calculational method with the program DZP (Ref. 4). It can be shown that highly optimized design needs much effort in manufacturing because small deviations may have a big impact on noise excitation.

In this paper a method for gear noise prediction is presented. This method is used in a comparison between the measurement and calculation of gear noise excitation for two automotive gearboxes. After modelling the gear meshes with their nominal main and microgeometry, transmission error and dynamic tooth force were calculated. In the first step the mesh excitation of nominal and topologically measured microgeometry was compared. As a result the difference between nominal and measured microgeometry had a significant impact on the excitation behavior. In particular, highly optimized microgeometry design needs much effort in manufacturing because small deviations in manufacturing may result in major changes in noise excitation; noise measurement results confirmed the calculation. Additionally, the dynamic behavior of shafts, bearings and housing was addressed. The presented methodology enables the gear engineer to optimize the microgeometry of gears with respect to their robust manufacturing