Heller Machine Tools introduces its versatile HF Series 5-axis horizontal machining centers to North America for machining complex prismatic parts from lighter, smaller workpieces to heavier workpieces up to 800 kg table load. In the series of two machines, the fifth axis is provided by the workpiece on a swiveling trunnion with rotary table or a pallet changer for higher volume production. Users can specify from a range of four spindle packages based on the material they are to process. Spindle speeds up to 18,000 rpm and torque up to 354 Nm are available.

According to Heller, the main target groups of the HF series are the general machine industry and automotive suppliers. The two new machine models are Heller's entry into a popular size range for these industries. The HF 5500 offers a work area of 900x950x900mm (X/Y/Z), and the smaller HF 3500 has a work envelope of 710/750/710mm (X/Y/Z).

With three linear axes in X, Y and Z and two rotary axes in A and B integrated into a rotary table on a trunnion, the HF machines are designed for 5-sided machining and simultaneous 5-axis machining. The HF machines may alternatively be equipped with a lift-and-rotate pallet changer for series 5-sided production. Standardized pallet automation solutions may be supplied by Fastems or Schuler.

Contrary to conventional 5-axis machining centers, Heller's concept is not only based on single-part clamping but provides the possibility of multiple clamping or the clamping of very large components (transmission cases using ‘window-type' fixtures).

Recently, Heller demonstrated the impressive capabilities of the HF series. Using a 100mm diameter face-milling cutter, a chip removal rate of 470cm3/min was achieved, machining 1.2312 steel with a feed of ap 3.5mm and an engagement width of ae 75mm.

An optional Speed Package enables acceleration of up to 10m/s2 and rapid speeds of up to 90m/min to be achieved on the HF series. This provides a reduction in chip-to-chip times of approximately 10 percent.

HF series machines are equipped with a Siemens control and a double pivoting main operator panel with a 24-inch touchscreen as well as a newly developed Heller user interface for maximum ease of operation. 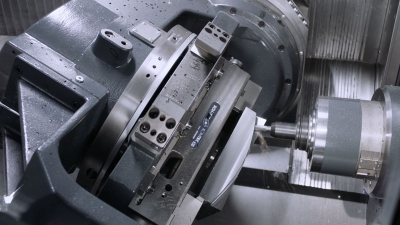