What will have to change in the axle drive when an electric motor with the same nominal power takes the place of the combustion engine? At first glance, nothing. Or so it seems. However, the engine management in electrically driven cars requires a very different specification of the driveline and the gearbox.

The root cause for changing the requirements of an electric axle drive is the very low on-board energy content. An 80-liter diesel tank provides 784 kWh of energy, whereas a lithium-ion battery weighing 500 kg provides 75 kWh, of which only 55 kWh is usable. This requires a very economical use of energy. Instead of converting the vehicle's kinetic energy into heat during braking, the engine is operated as a generator. The braking power is up to 250 kW for vehicles with a total weight of 2.5 tons; heavier vehicles need even more braking power.

And here lies the task in designing a hypoid gear set for an electrically driven vehicle. In the past, we focused just on the drive side. Now, however, due to the high brake torques during recuperation, we must pay particular attention to the coast side. Figure 1 shows the effect of the tooth forces on a hypoid gear. For a better view of the tooth forces, the pinion crown is not shown in the two figures at the bottom. The forces acting on the ring gear are shown as full arrows, and the reaction forces acting on the pinion are shown as dashed arrows. 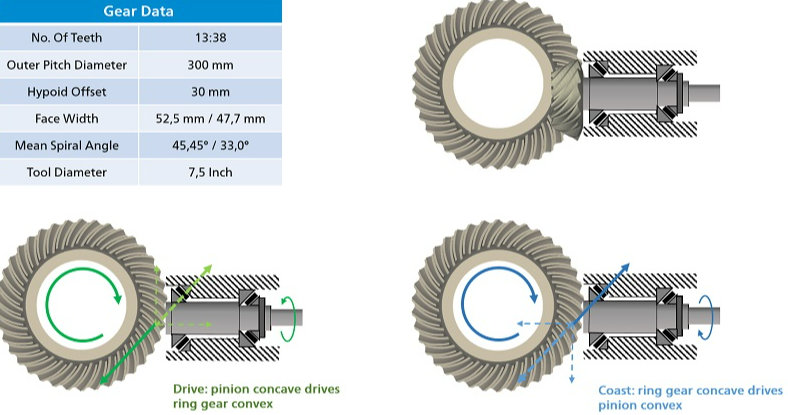 Figure 1: Gear data and tooth forces for drive and coast

For the drive side the concave pinion flanks move the convex ring gear flanks. The normal force of a pinion tooth, which is generated by the drive torque of the engine, is counteracted by the counterforce of the ring gear tooth of the same magnitude. This force acting on the pinion can be divided into two directions: an axial direction, which presses the pinion into the tapered roller bearing behind the pinion head, and a vertical direction, which acts against the axial offset of the pinion. This is a benign load case, since the limited rigidity of bearing and housing will move the pinion away from the center of the gearbox with an increase of backlash and tip-root clearance. In addition, the axial rigidity for the pinion shaft away from the gear center (to the right in Figure 1) is much greater than in the other direction. 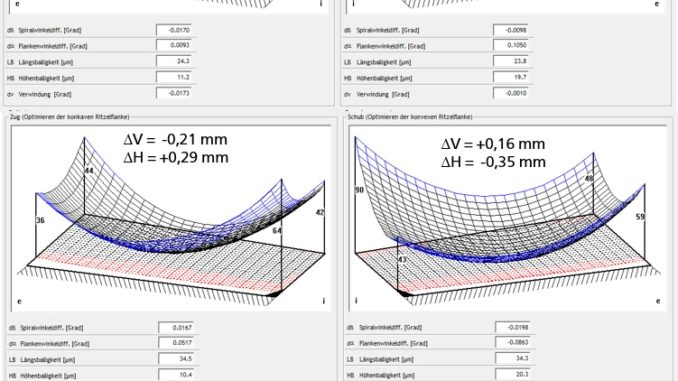 The 500 Nm load for the coast side is still non-critical. But when recuperating with high braking power, substantially higher torques occur. With a braking power of 250 kW and a speed of 70 km/h, the resulting torque at the pinion for our example is 1,500 Nm. For this gearbox design, the displacements are ΔV = +0.3 mm and ΔH = 1.02 mm. Here we have our critical case. The backlash will significantly decrease, and an equal effect happens to the tip-root clearance. In a worst case scenario, this could result in jamming of the gear. In order to avoid this, we need to increase the backlash considerably and also increase the tooth root factor in the dimensions of the gear.

It can be seen immediately in Figure 3 that the loaded contact pattern for the coast side is a distinct edge contact with a maximum pressure of nearly 1,300 MPa near the heel in the root. The shape of the tooth flank is obviously not suitable for ensuring a reasonable tooth contact for the high load and associated displacement. 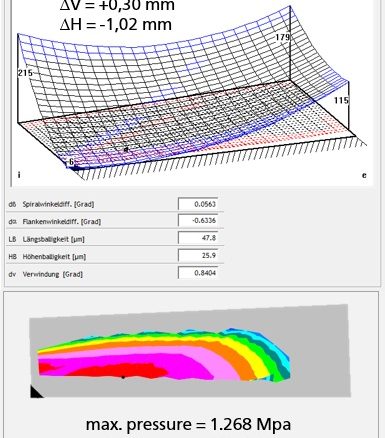 Many years ago, Klingelnberg developed the Modified Crowning principle to perform end reliefs. Flank form modifications can be applied with superimposed motions of higher orders like Modified Roll and Helical Motion, but the effect runs more or less diagonally across the tooth flank. A  lengthwise modification being perpendicular to the tooth root is only applicable to non-generated ring gears using the Modified Crowning approach. 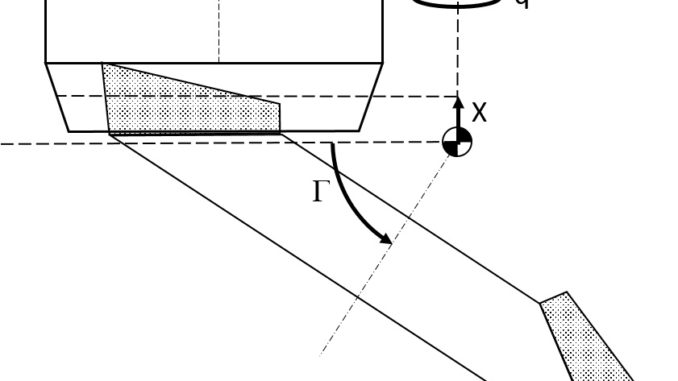 The tooth space shape of a non-generated ring gear is an exact copy of the cutting tool, a grinding wheel in this case. The relative position between the workpiece and tool is described by four parameters, the so-called plunging position, shown in Figure 4.1 and 4.2. 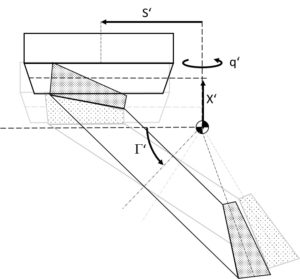 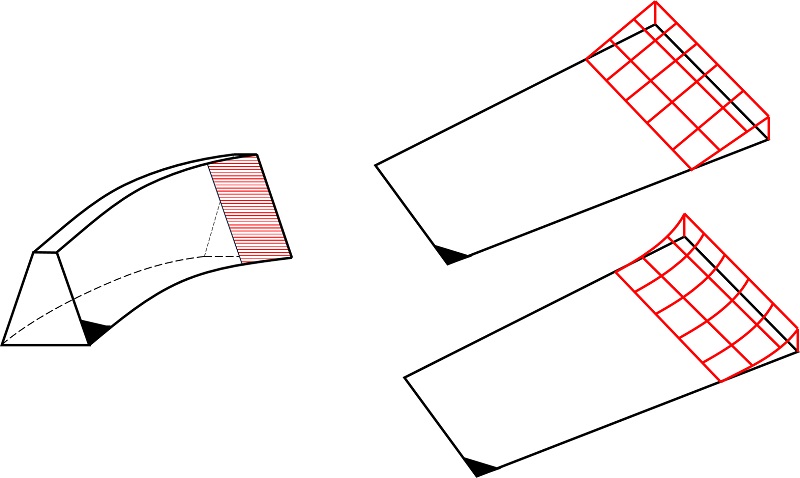 This example shows an end relief at the heel of the ring gear. But it is equally possible to apply an end relief at the toe of the gear. This is an essential feature of Modified Crowning for the design of a hypoid axle driven by an electric motor. The end relief will help to avoid the edge contact in the root toe area caused by the excessive displacements in recuperation mode.

Combined end relief on ring gear with torsion on pinion

As shown in Figure 3, a flank form modification is needed to move the contact pattern more towards the tip of the gear flank and limit the dimension of the loaded contact pattern such that there is no edge contact. It goes without saying that for the unloaded condition, the tooth contact must be suitable, and the transmission error should be as small as possible.

Figure 6 shows the process of Ease-Off development. In the first step a large longitudinal twist is applied to the pinion flank using Modified Motion, e.g. Modified Roll and Helical Motion. The goal is to move the load bearing pattern from the tooth root of the ring gear to the center of the tooth. Next an end relief is applied at the toe of the gear with Modified Crowning. The last step is to align spiral- and pressure angle to place the unloaded contact near the tip close to the heel.

When performing these steps, we finally get an Ease-Off showing a very low unloaded transmission error and loaded contact pattern without edge contact. 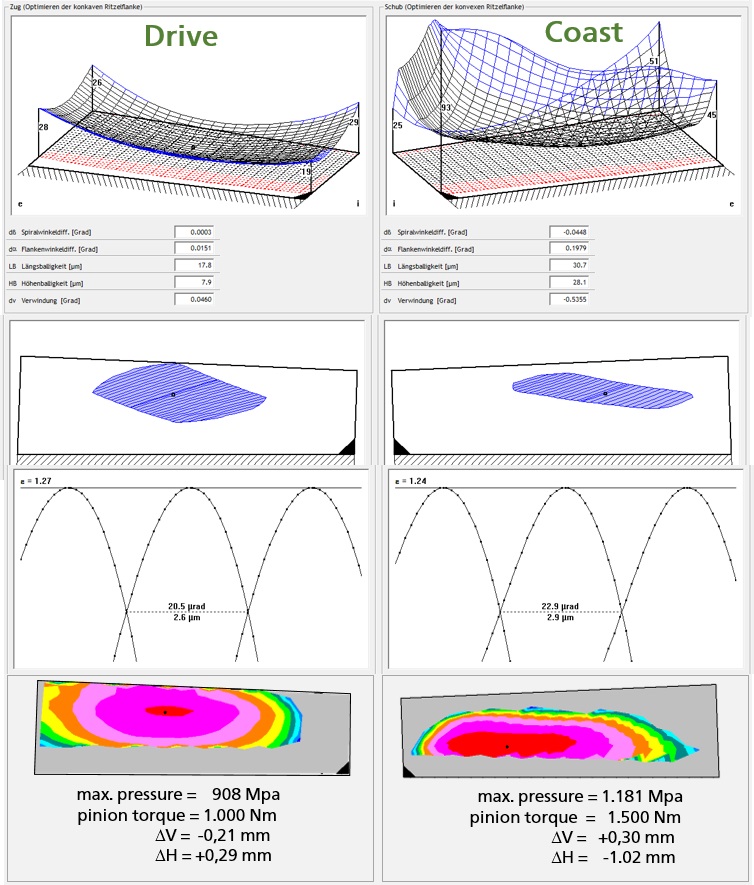 Even though the Ease-Off looks very unusual at first glance, these flank form modifications offer all the characteristics we need for our design task. The unloaded transmission error is for both, drive and coast lower than 25 μrad and the unloaded contact pattern is well positioned on the flanks. Despite the huge displacements for the coast side, the loaded contact pattern is clearly limited on the tooth flank. Moreover, the maximum pressure is in a non-critical range for pitting damages.

Modified Crowning is based on an idea from 1994. It is an immediately applicable method that can be used in conjunction with Modified Motion to apply flank form modifications to bevel and hypoid gears to handle displacements that have not been relevant until now. In particular, for electric drives generating high loads on the coast side, Modified Crowning and Modified Motion open the door to highly efficient gear designs.

With a sliding gear system, after disengaging, there...

Hi there, Nice Blog. Thanks for sharing the blog...

Not too dissimilar to the sliding gear system...

Request for details of this new advance methods...