This article is printed with permission of the copyright holder, the American Gear Manufacturers Association, 500 Montgomery St., Alexandria, VA 22314-1560. Statements presented in this paper are those of the authors and may not represent the position or opinion of the AMERICAN GEAR MANUFACTURERS ASSOCIATION.

Management Summary
In most transmission systems, one of the main power loss sources is the loaded gear mesh. High power losses lead to high energy consumption, high temperatures, early oil aging, increased failure risk and high cooling requirements. In many cases, high efficiency is not the main focus, and design criteria such as load capacity or vibration excitation predominate the gear shape design. Those design criteria mostly counteract the highest possible efficiency. In this article, the influences of gear geometry parameters on gear efficiency, load capacity, and excitation are shown. Therefore, design instructions can be derived, which lead to low-loss gears with equivalent load capacity

Introduction
Power losses occur in different components of a gearbox. Each gearbox element produces some power losses. The total power loss is the sum of the power losses of the single elements. Basic gearbox elements are bearings, gears and seals. Their power losses are usually individually mentioned. Other potentially integrated elements, such as clutches or oil pumps, also produce losses, but these are not usually treated separately. Their power losses are merged in auxiliaries. According to their types, losses can be further divided into no-load losses and load-dependent losses. Equation 1 (on page 29) shows the summation of all power losses PV in a typical gearbox. Losses in bearings and gears usually predominate in a gearbox.

No-load losses comprise all losses that exist when a gearbox is rotating, but not transmitting power. No-load losses derive from seals or from windage and churning.

Load-dependent losses occur only in elements that carry the transmitted power or portions of it, such as bearings and gears. They encompass all power losses that vary with the power transmission in the concerned element. They evolve when two surfaces under pressure move relative to each other. Power losses in this case depend on the acting force between the solids, the sliding speed, and on the coefficient of friction established in the contact of the surfaces.

For the composition of total power losses PV in a gearbox, the following four main components are investigated: 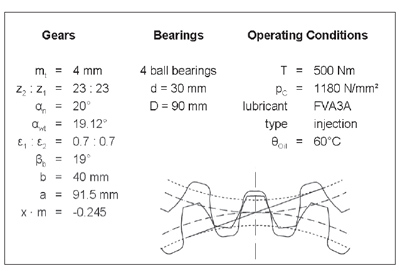 Power Loss Portions
In Figure 2, the amount of power losses for each of the four considered components is depicted versus the rotational speed at the operating conditions given in Figure 1. The investigation of power loss composition in Figure 2 is accomplished with the example of modified reference gearing with spur gears (β = 0°). It shows that the gear no-load losses increase progressively with speed, while the other components seem to depend fairly linearly on the speed. For the vast range of rotational speeds, the main portion of losses are load-dependent gear losses. Only for very high speeds do no-load losses prevail, though the load-dependent gear losses may still occupy an important portion. Bearing losses have only subordinate portions of the total losses throughout the whole speed range. 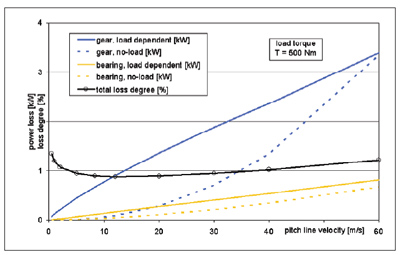 In addition, the sum of these losses is rated against the power transmission, which results in the loss degree ζ, the complement of the degree of efficiency η:

The loss degree ζ shows a significant minimum between 10 and 20 m/s rotational speed. This reflects the basic changes in the coefficient of friction in the mating gears from the mixed lubrication regime for low speeds towards elasto-hydrodynamic (EHD) friction at higher speeds. Depending on the geometry of the transmission and the operating conditions, this minimum occurs at different speed ranges.

The prevailing power loss portion is very dependent on the operating conditions. However, in order to minimize the power losses, a focus must always be set onto load-dependent gear losses since their portion is always significant. With increasing speed, no-load losses of gears need to be considered increasingly.

Basics of Load-Dependent Gear Losses
The load-dependent losses depend on both gear and lubricant properties. The calculation of load-dependent power losses in gears is based on the law of friction according to Coulomb (Ref. 3). 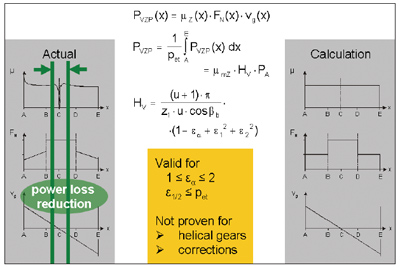 Sliding speed is a geometry parameter that is derived from the gear shape and can be calculated exactly.

With the introduced simplifications (constant coefficient of friction along the path of contact, equal load distribution onto mating pairs of teeth), Equation 4 can be applied to gears and transformed into Equation 7:

The gear loss factor HV was introduced by Ohlendorf (Ref. 9) and is only dependent on gear geometry.

These equations were set up for usual spur gear geometries (1 ≤ εα ≤ 2 and ε1/2 ≤ ρet) and produce acceptable results in these cases. Extreme gear shapes, however, may result in calculated power losses, which deviate significantly from actual power losses. By more detailed considerations, a better approximation of the real distribution of the load along the path of contact can be obtained by using sophisticated calculation methods such as FEM or the FVA-program RIKOR. This is proven by experimental investigations (Ref. 14). Gear loss factors based on such methods are called local gear loss factors HVL. Differences between HV and HVL are significant for high-contact-ratio gears, helical gears or gears with profile corrections (Fig. 4). 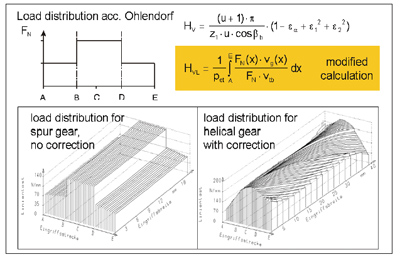 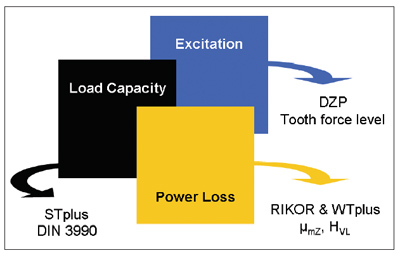 Lubricant properties affect the power losses via the coefficient of friction µ and are not subject to this investigation. Their influence is supposed to be constant here.

Influence of Gearing Geometry on Load-Dependent Power Losses
Figures 6–13 show the influences of gear geometry parameters on the gear load-dependent power losses compared to the reference gears given in Figure 1. The influence of these parameters on the coefficient of friction is included. For these parameter variations, the pitting and tooth fracture capacities are provided referring to the reference gearing with capacities of 100%. Ideally, power loss and tooth force level are low while the safety factors of load capacities are high.

The most important geometric parameters are transverse contact ratio (Fig. 6) and module size (Fig. 7). Less strong is the influence of the pressure angle, but its importance comes from the advantage that, in the given range, a higher pressure angle has only advantageous effects both on power loss reduction and higher load capacities, and no unfavorable effects on excitation (Fig. 8). 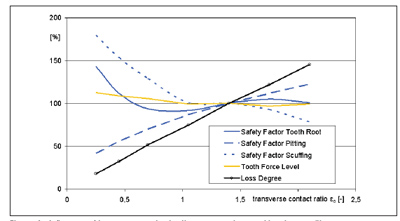 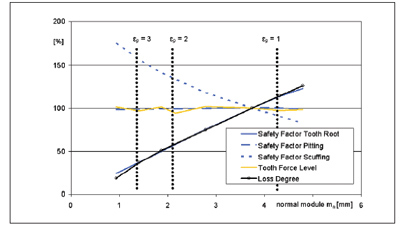 Figure 7—Influence of module on power loss and load capacities. 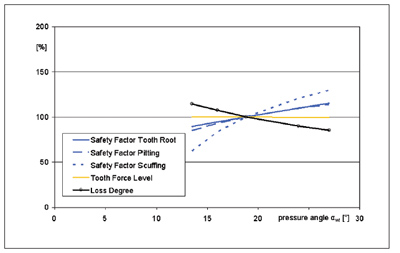 With helix angle, power losses increase generally but to a limited extent (Fig. 9). For minimum power losses with small transverse contact ratio, there has to be a significant overlap contact ratio (εβ > 1) for proper load capacity and noise excitation. 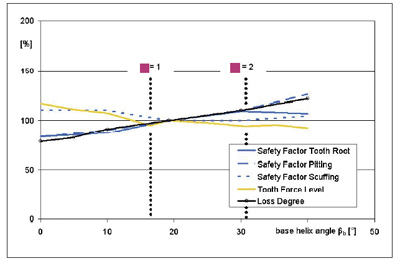 The influence of surface roughness shows positive effects if it is reduced (Fig. 10). Unfortunately, an improvement is usually subject to cost increase. Recent investigations show that this effect is limited. Below a certain roughness, there is no further improvement. Moreover, there are other effects of surface structure such as roughness orientation, which are not expressed by surface roughness but can affect the power loss to a substantial extent. 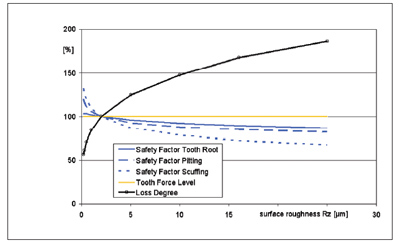 The gear ratio and face width parameters (at constant load per face width) are usually constraints that cannot be changed. Their effect on power loss, capacities, and excitation is shown in Figure 11 and Figure 13, respectively. 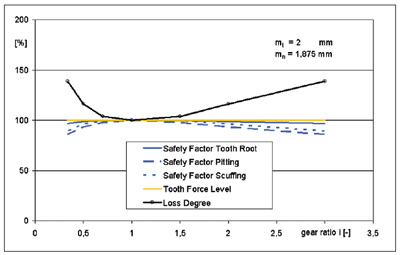 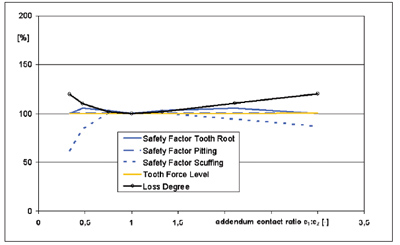 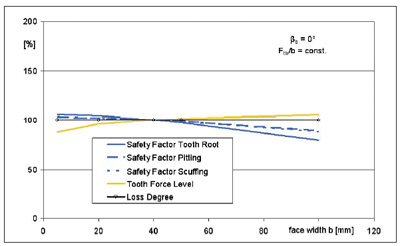 Addendum transverse contact ratio is best if equally split between both gears, but small deviations have marginal impact (Fig. 12).

Gearing Optimization Process
The following steps conclude the optimization process towards low-loss gears. Most of these steps are considered unconventional, but prove more efficient to the gear design with respect to power savings. However, it is not a unidirectional process, but rather a loop that has to be run through cyclically.

Power Loss Reduction with Optimized Gearings
From the reference gearing given in Figure 1, an optimized gearing is derived. It has the same or better load capacities, but lower power losses. Figure 14 compares the absolute figures of power loss components at one operating point (vt = 10 m/s ≈ n = 2,100 U/min; load torque 500 Nm). In this example, the bearing type has been optimized, but is not relevant here. The main changes applied encompass the following: 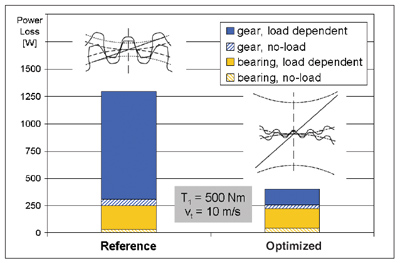 For the optimized gears, the module and the transverse contact ratio are radically cut back, compensated by a doubled face width. So, the optimized gears have a low transverse contact ratio, but a high overlap ratio for the same load-carrying capacity. Furthermore, the tooth root fillet has a larger radius in order to support the tooth root fracture capacity, and the transverse pressure angle is significantly increased for a larger radius of curvature, which backs up the pitting capacity and results in a lower coefficient of friction. Total power losses can be reduced by two-thirds in total (68.8%), where the largest portion of loss reduction is achieved for the load-dependent gear losses (see Fig. 14). The reduction of load-dependent gear losses is caused by two advantageous effects: a lower coefficient of friction because of better curvature (µm = 0.030; –32%) and lower gear loss factor (HVL = 0.045; –78%). This combination results in a reduction of load-dependent gear losses of [1– (1–0.32)*(1–0.78)] = 85%. In Figure 14, the transverse section of both the reference and the optimized gears is included.

A similar optimization procedure is applied to Type C gears, which is a frequently used test gear geometry for many kinds of gear and lubrication tests. In Figure 15, the main geometry parameters of Type C gears are given, as well as those of the corresponding low-loss gears. Additionally, the calculated safety factors are shown. Those of low-loss gears are at least equal to or even higher than those of Type C gears. 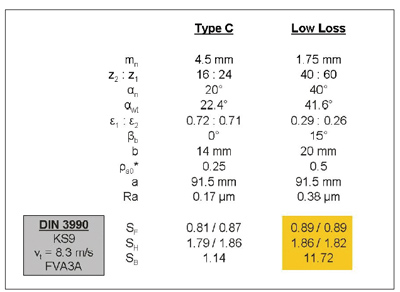 Figure 16 shows experimental results of the power losses of both Type C gears and corresponding low-loss gears. Enormous power loss savings of up to two-thirds can be achieved with low-loss gears. The given percentages of power loss reduction refer to the total power loss where higher bearing losses of low-loss gears are included because of the higher pressure angle. So, the pure load-dependent gear losses are even further reduced than the numbers suggest. 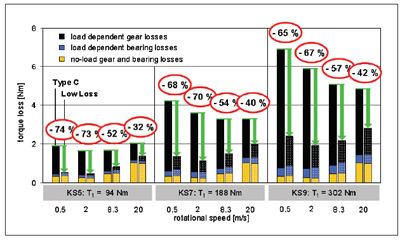 Besides power loss reduction, lower bulk and oil temperatures can also be achieved. Measurements during tests without lubrication showed a bulk temperature of 105°C for conventional gears where low-loss gears achieved 67°C. Also, its lifetime may be extended: Sample tests with coated gears—but without lubrication—showed that the coated gears had 15–20 times the load cycles of conventional gears before the coating was damaged.

Conclusion
From the investigations shown in this report, the following main conclusions can be drawn:

Further investigations are necessary in the fields of load-carrying capacity and noise excitation properties of unconventional low-loss gear design.

Acknowledgment
This paper contains results which were elaborated on the behalf of the sponsored project No. IPS-2001-80006 ‘Oil-free Powertrain’ of the European Union EU. Therefore, we want to thank all participating industrial associations/groupings:

Prof. Dr.-Ing. Bernd-Robert Höhn is head of the Institute of Machine Elements and the Gear Research Centre FZG at the Technical University Munich. He worked for 10 years at Audi as manager of the departments for gear research, design and experimental investigations and became a professor in 1989.

Dr.-Ing. Albert Wimmer was assistant at the FZG. The subject of his PhD thesis was theoretical and experimental investigation of load dependent losses in gears. He is now working with Weigl Engineering GmbH in the field of innovation management of geared systems.