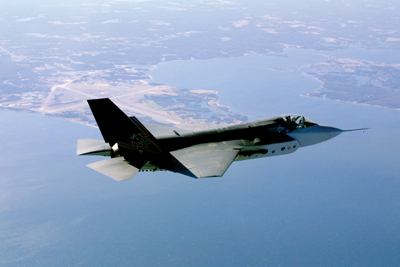 Development of next-generation aircraft like the Joint Strike Fighter is driving demand for aerospace gears. Photo by Lockheed-Martin, Courtesy of the U.S. Marine Corps. 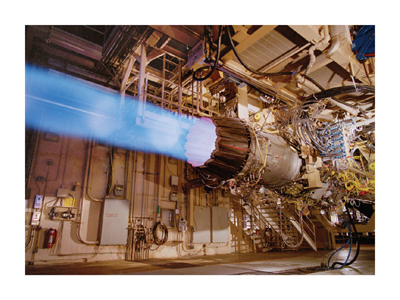 A full-power test of the F135 engine for the Joint Strike Fighter program. Photo courtesy of Pratt & Whitney.

Aerospace manufacturing has seen quite a turnaround in the past few years. The world’s manufacturers of airplanes, helicopters, missiles, space vehicles and satellites are all extremely busy right now--and that’s keeping quite a few gear manufacturers busy as well.

There’s no question that the events of 9/11 had a profound effect on aerospace manufacturers. To say that the industry struggled after the 9/11 terrorist attacks would be considered a huge understatement.

"9/11 knocked the bejeezus out of us," says Joe Arvin, president of Arrow Gear Co. in Downers Grove, IL. Arrow supplies spur and bevel gears and complete gearboxes to aircraft manufacturers. After 2001, orders from aerospace manufacturers slowed so much that the company had to downsize to nearly half its former number of employees. The company’s sales to one customer alone dropped by $6 million almost overnight, Arvin says.

But with air passenger traffic returning to healthy levels, worldwide economic growth and expanded military programs, all that has changed.

"The industry is booming," Arvin says.

According to the Aerospace Industries Association,based in Arlington, VA, the U.S. aerospace industry generated a record $170 billion in sales during 2005, up 9.2 percent from 2004’s $156 billion. Moreover, those sales increased in all product categories (civil aircraft, military aircraft, missiles and space sales).

The association is predicting those strong sales to continue. "We’re looking forward to a year in ’06, in which we grow by another $14 billion," said John Douglass, AIA’s president and CEO, at the association’s annual year-end review and forecast luncheon, held in December.

The reason for the industry’s optimism has a lot to do with the recovery and projected growth of the commercial airline business. Part of that is shown by the large number of backlogged airplaine orders waiting to be manufactured and delivered. According to AIA documents, the current industry backlog is around $241 million, which is about a year-and-a-half’s worth of airplane sales.

Those backlogs have been trickling down to the producers of parts and component systems, such as Arrow Gear. "I have the largest backlog in the history of the company," Arvin says.

Two years ago, Arrow Gear’s order backlog was around $26 million. Today, it’s up to around $40 million, Arvin says.

Airbus and Boeing, the two largest airplane manufacturers, are both projecting steady demand for their products over the next 20-30 years.

According to Airbus' Global Market Forecast, published in December 2004, Airbus expects world passenger air traffic to increase by about 5.3% per year from 2004 through 2023. To meet that demand, Airbus expects the number of aircraft in service to double.

Similarly, Boeing’s Current Market Outlook, published in 2005, predicts passenger air traffic will increase about 4.8% per year from 2005-2024,and that the worldwide fleet will more than double by adding more than 35,000 passenger and cargo jets over that period.

"The long-term outlook for air travel is positive," Boeing’s report says. "The fundamentals of economic development, globalization, and the need for people to travel will be strong in the coming decades."

The growth of the commercial airline market and the need for airlines to replace aging fleets is what’s driving the demand for newer and larger aircraft that can fly farther, such as the Airbus A380. New airplanes mean new engines and new parts for companies like Arrow Gear, which manufactures spiral bevel gears for the Airbus A380.

In addition to the recovery of the commercial airplane manufacturing business, the demand for military aircraft is very strong. One of the things driving that demand is the United States’ war on terrorism.

"Given the war effort with gears and gearboxes coming out of the theater with less life...this has placed a never-seen-before demand for new parts, and if available, repairables," Noonan says.

In addition to the war effort, there are a number of high-profile military aircraft development projects underway, including the Joint Strike Fighter program, the V-22 Osprey tilt-rotor program and other projects, all of which require precision gears.

Both Arrow Gear and Purdy manufacture parts for the Joint Strike Fighter program. The F-35 Joint Strike Fighter is a supersonic, multi-role stealth fighter designed to replace a number of aging fighter and strike aircraft. Assembly of the first F-35 was completed in February, and its first flight will take place later this year.

The F-35 is designed to be fitted with either of two propulsion systems: the F135 engine from Pratt & Whitney or the F136 engine from GE/Rolls-Royce. Gears from Arrow and Purdy are used in those engines. 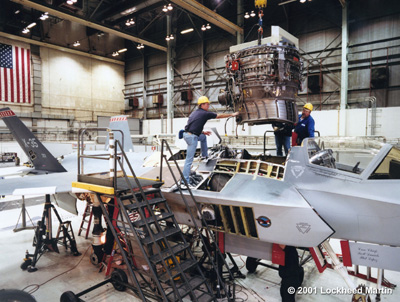 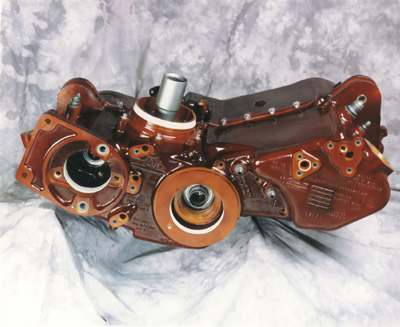 A gearbox from Arrow Gear Co. for the Joint Strike Fighter program.

Besides the Joint Strike Fighter, the U.S. military is also rebuilding its helicopter fleet, with light utility helicopters, armed reconnaissance helicopters and the new CH-53K being developed by Sikorsky Aircraft.

With all of that in mind, the helicopter market is definitely a growth market, says Noonan.

Another aspect of the industry adding to demand for aerospace gears is the fact that most OEMs are now outsourcing work that used to be done in-house.

"The OEMs have a tremendous amount of work on their plate," Noonan says. "This has now forced them to go out with this type of work; previously this core work remained inside their facilities."

In fact, the more services and value a gear manufacturer can provide, the better he may be able to serve this market, both Arvin and Noonan say.

"How can one stay relevant, add value and remain a necessary entity for the OEMs?" adds Noonan. "If you are able to answer that, remain focused on that and create your own niche, you should be able to survive."

In addition to manufacturing the gears, Arrow offers its design services to many of its OEM customers--customers who used to do all of the design work for themselves.

"All major OEMs are divesting themselves of bevel and spur gear designs," Arvin says, adding that Arrow Gear has done the design, development and manufacturing of gears and gearboxes for the Airbus A380, the F-35 Joint Strike Fighter and other projects.

The recent increased demand for aerospace gears has had a profound effect on the operations of both Arrow and Purdy.

"We are continuing to hire," says Noonan,who adds that the company expects steady employment growth and new equipment acquisition to keep pace with part demands the next few years.

Hiring can be difficult,though. "The qualified labor pool...is nonexistent, which has made this a very difficult, arduous task," Noonan says. "Bottom line: you can have all the equipment in the world, but unless you can find and retain qualified, competent people to run it, you will be out of business very soon."

Over the past six months or so, Arrow Gear has hired about 85 employees, and Arvin expects to hire another 10 as soon as possible. After that, the company will be at about 220 employees, almost to the level it was at before 9/11. Arrow has also invested heavily in equipment. Within the last year, the company has spent about $3 million on a new carburizing furnace, a new superfinishing system, a new bevel gear cutting machine, a new CNC gear inspection system, a new 5-axis milling machine and four new lathes.

"We have to continually invest in new technology to take care of our customers and future customers," Arvin says.

Both he and Noonan expect that the good times will continue in aerospace manufacturing, at least for the short term. Arvin sees the demand leveling off around the middle to end of 2007, while Noonan expects to see the same level of growth and part demand over the next 5-8 years, possibly longer if the war on terrorism continues.