Home » What's All the Buzz About

What's All the Buzz About

What’s that you said? I’m sorry, could you repeat that? Would you speak up, please? I can’t hear a thing you just said!

Sorry about that. It’s just hard to hear around here lately with all the cicadas. Many of you have probably heard—or maybe you’ve been infested as well—but the Midwest is home to a very populous brood of 17-year cicadas, and 2007 was their year.

Around the beginning of June, the nymphs began crawling out of the ground and making their way up tree trunks, where they attached themselves, shed their skins and transformed into winged adults. And then the chorus began. 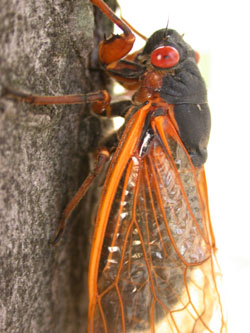 In some areas, the noise is almost deafening. It seems more or less constant, but if you stand and listen, you can hear the cicadas react to each other en masse, their chirps rising in great waves of crescendos.

And then there are the dive-bombers. Cicadas aren’t particularly good navigators, and they’ll latch onto pretty much anything they run into, even—say—an editor out for an evening stroll.

By the time you read this, this batch of the 17-year cicadas will all be gone. They’ll have mated, the females will have laid their eggs, and the adults will have died and their songs ended. Of course, the eggs will hatch and new nymphs will drop to the ground and burrow underground, where they’ll stay for 17 more years.

Even though they are above ground for only about six weeks, the cicadas have given us plenty to talk about around Chicago. The whole town is abuzz with them, if you’ll pardon my pun.

But for me, all the talk about cicadas reminds me of another cyclical event, one which is about to arrive in the gear industry. Of course, I’m talking about Gear Expo, which will take place October 7–10 in Detroit’s Cobo Center.

Like the cicadas, Gear Expo comes on a regular cycle.

It’s hard to say. Mostly, the answers depend on you. AGMA has been running ads in every issue urging you to “Grab Your Gear and Go” to Gear Expo. (See page 55 for AGMA’s show ad.) But how many of you have taken the time to log on and register? How many have penciled it in to your schedules? How many have booked reservations?

In theory, people attend trade shows when they have money to spend, when they need extra manufacturing capacity, when there are new technologies being introduced, or just to meet friends and develop relationships. I know that most of you are pretty busy. Hopefully, that means you’re also making money. It probably means you’re in need of extra capacity, but it also means you might not find the time to go to the show. But like the song of the cicadas, Gear Expo is a limited engagement. If you miss it, you’ll have to wait another two years.

Let’s reverse the recent trend of dwindling attendance and make this a year to remember.

After all, a strong show demonstrates a strong industry. We’ll be there, as always, making as much noise as we possibly can. We hope you’ll join us. Let’s give the gear industry something to buzz about.