Forest City Gear president Fred Young has a straightforward strategy for acquiring and retaining business—always give the customer a higher level of quality and performance than specified, but do it without adding much cost or time to the job. 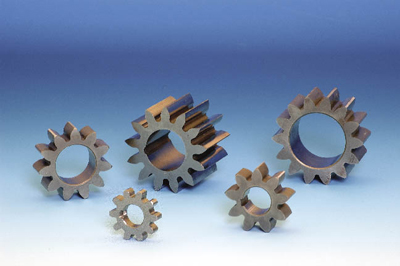 “On bore-type gears,” he says, “we have found that honing the bore is a good way to improve quality in the areas of size, roundness, straightness and finish, without adding a lot of extra cost. The customer notices the difference in a smoother, quieter, more efficient drive.”

Depending on the production needs for a specific gear, Forest City Gear hones at various points in the manufacturing process using three different systems. One of those systems—a fully automated vertical machine—uses Sunnen’s patented Krossgrinding® tools, which the manufacturer says are capable of controlling bore size down to 0.00005" and finish to 16 µin or better. 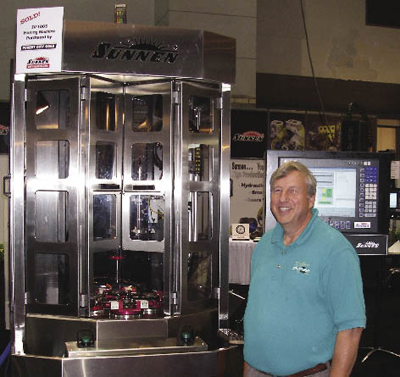 Forest City produces fine- and medium-pitch custom gears, such as internal, helical and spur as well as worms, splines and sprockets at quality levels as high as AGMA 15 (DIN 2–3). Maximum O.D. on most parts is 20", except for worms (5") and worm wheels (16"). Forest City’s gears are used in planes made by Boeing, Airbus, Cessna and Beechcraft, as well as for the space shuttle, the space station, Mars rover vehicles and the Abrams tank. Many motorcycles and race cars use Forest City gears, as does one of the few bait-casting reels made in the United States. About 30% of the company’s work is aerospace-related, 5–10% medical, 5% military, and the remainder is industrial or instrument work. Part runs range from one to several hundred thousand. Typical materials include 12L14, 1215, 8620, 9310 and various stainless grades, as well as aluminum, bronze, brass, Inconel, Hastelloy, titanium, plastics, wood fiber and powdered metal.

One of Forest City Gear’s core products is pump gears, which start as flat, washer-type blanks made on a screw machine. “These gears operate in a small housing, so any perpendicularity error in a shaft-mounted gear causes wobble, loss of efficiency, noise and increased friction,” says Young. “An adage of gear making is that a gear can be no more accurate than the blank with which you start. On a bore-type gear, this means starting with parallel faces and a perpendicular, round bore with parallel walls, and no taper or belling. Our minimum standard is +/–0.0005" for parallelism and perpendicularity, and we’ll work to tighter tolerances as circumstances require.” 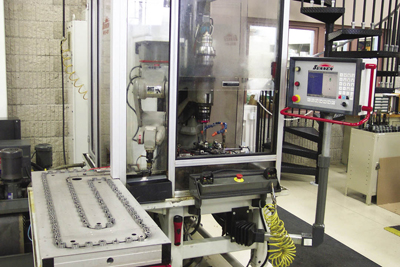 The pump gear blanks are double-disc-ground for face parallelism and width, then re-bored on an automated boring lathe to re-qualify the perpendicularity. “We leave some stock in the bore because it is much easier to control absolute size on a hone than it is on a lathe,” Young adds. These blanks are stack-hobbed, and grouped on an arbor in quantities based on four times the diameter of the bore, divided by the face width of the part. “If you don’t have good parallelism and perpendicularity, it can introduce lead error in cutting the gear, or it forces a reduction in the number of blanks on the arbor, eroding your production efficiency,” he explains.

Pump gears often have a standard keyway or a blind-hole keyway added that must align with a tooth. “When we cut that keyway, it throws up a tiny burr, so honing for final size allows us to clean up that burr, too,” says Young. “This is where the Sunnen machines really shine, allowing us to control final size automatically down to a few microns, a fraction of our allowed tolerance. Honing also leaves a crosshatch pattern on the bore surface, which helps maintain a film of lubrication for gears that rotate on a shaft.” 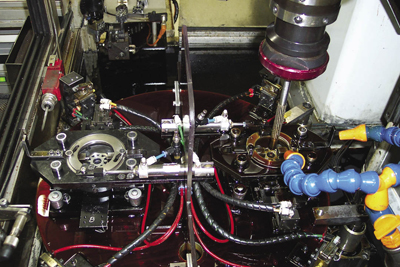 Young explains that the five-tenths tolerance on the bore size shrinks to three-tenths or less when Six Sigma quality requirements are imposed. “Our real working tolerance is much smaller than the print spec, if we are shooting for a Cpk of 2 or better, which we often achieve,” Young says. “In fact, we have run capability studies where we’ve hit double-digit Cpk levels when honing for bore size, and we consider it a less expensive and temperamental process than ID grinding.”

Honing, in fact, is a less-costly process, with an automated single-spindle hone typically costing 50–75% less than an ID grinder, according to Rich Moellenberg, manager of Sunnen’s custom products group.

“With automated honing, we can easily hit tolerances of 50 millionths to two tenths, so the gear is going to roll more smoothly, more quietly, with less vibration and probably last longer,” Young stresses. “There will be a perceived improvement the customer can sense, even without sophisticated measuring equipment. This establishes high customer expectations that are difficult for competitors to meet.” 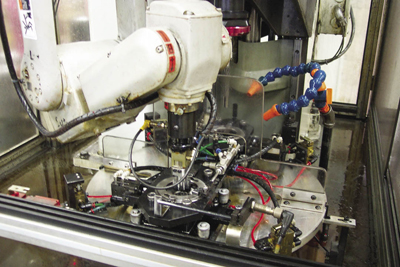 Forest City Gear owns three Sunnen hones: a fully automated vertical MHS system, predecessor to Sunnen’s new SV line, and two EC-3500 machines, predecessors to the new ML-4000 power-stroked machine. The vertical MHS machine has a rotary table with two workholding positions fed by a robotic loading system, ensuring high “in cut” times. Krossgrinding tools combine the traditional expanding-mandrel design with a long-wearing, diamond-plated sleeve, so they operate much like a traditional honing tool with stones. “We get a tool life of about 250,000 parts, depending on the material, while typically removing 0.0020–0.0030" of stock at cycle times of 15 seconds,” Young says. A new Sunnen SV-1005 vertical honing system will soon replace the workhorse MHS machine.

One of the two EC-3500 power-stroked hones has an auto loading system. These machines allow feed rate, stroke length and stroke speed to be set at the control. Sensing probes monitor bore size and automatically end the cycle when the bore hits the specified size. The control also has capability for automatic stone wear compensation and two-stage feed pressure, which allows cycle time reduction by removing most stock at a higher feed pressure, then finishing at lower pressure. “We use CBN and aluminum oxide tooling on these machines in several different configurations, depending on whether the bore is blind, keyed, etc.,” Young explains.

Forest City Gear employs honing at various points in manufacturing. Parts are typically honed after hobbing, but on extremely critical gears, blanks might be honed before and after cutting. “If we have a very tight tolerance situation and want better sizing than we can get by boring on the lathe, we might hone before cutting, as well as after,” Young says. “Fixturing on the hones also allows some degree of control and correction of perpendicularity, should we need to do that. If parts are heat-treated, they are honed afterward to correct for the slight shrinkage in bore size. And if there is a plating operation, we have found it is easier to remove plating from the bore using a hone than it is to mask the part for plating.”

Forest City Gear devised a clever way to check the functional perpendicularity on bored gears that involves grinding almost all the taper out of a lathe mandrel, which then allows the gear to fit snuggly on it without tipping. With the mandrel mounted between centers and an indicator on the periphery of the gear, any perpendicularity error shows up when the gear is rotated. “This rotational check of perpendicularity is, we think, a better test of how the part will perform when sandwiched into the confines of a housing,” Young explains.

No matter what the part print specifies, all customers want quieter drives, smoother operation and greater efficiency, Young stresses. “We strive to give customers a product that is noticeably better than what they would get from a competitor working to the same spec,” he says. “Honing allows us to do that and to establish ourselves as a preferred supplier, while still making a profit.”