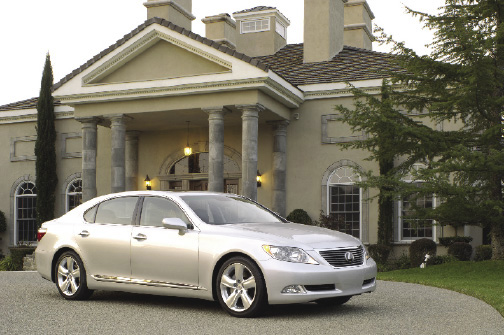 Unveiled at the 2006 North American Auto Show in January, the 2007 Lexus 460 luxury sedan will be the world’s first mass-produced car equipped with an 8-speed automatic transmission.

Already, GM sells a number of models with six-speed transmissions, including the GMC Yukon Denali; the Cadillac XLR-V, STS-V and Escalade lineup; and the Chevrolet Corvette. GM’s full-size heavy-duty pickups can also be equipped with an Allison 1000 six-speed automatic. 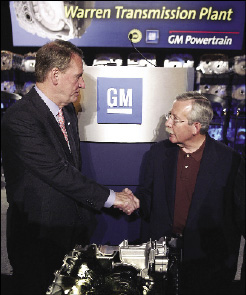 “It’s a best-of-both-worlds scenario with the six-speed automatic delivering great performance and enabling improved fuel economy,” said Jim Lanzon, executive director of transmission engineering for GM Powertrain. “It is almost like having two transmissions in one—the high numerical first gear provides tremendous off-the-line acceleration, but the transmission is able to use the six gears to evenly distribute the torque and settle at an overdrive gear that helps deliver great fuel economy.”

Lanzon also announced that the company would expand its goals to introduce 10 new variants of six-speed automatic transmissions by 2010, resulting in production of three million six-speeds annually.

The Hydra-Matic 6T70 will debut on the Saturn Aura and on one version of the Pontiac G6. The 6T75 will be offered on the Saturn Outlook.

The 6T70 and 6T75 were co-developed with Ford. According to the press release, this partnership allowed the new transmissions to reach production in less time and at about half the cost they would have required each company to develop on their own. 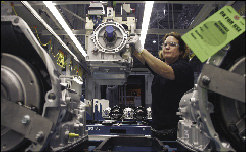 The 6L50, which debuts on the 2007 Cadillac STS performance sedan and SRX crossover SUVs, is based on the larger Hydra-Matic 6L80 featured in 2006 models.

In order to meet production levels for these new transmission programs, GM recently announced a number of plant expansions and investments.

“A new team concept arrangement was developed for six-speed production, which includes hourly members of UAW local 735 and salaried employees,” said Kingsley P. Wootton, plant manager at Ypsilanti Transmission Operations. “The team concept includes cohesive teams of four to six members, with a designated leader that assists the team, ensuring an efficient operation. Team members work with engineering personnel to provide input on product design and its impact on manufacturing, with a goal of ‘zero defects.’”

In June, GM announced a $332 million expansion of its Warren, MI, transmission manufacturing facility, in order to accommodate the production of the front-wheel-drive six-speeds.

With the latest announcement, investment by GM on six-speed transmissions since 2003 totals $1.7 billion, according to the company’s release.

“Raising the bar on the execution of new products is a critical part of our turnaround plan, and the broad application of six-speed transmissions plays a key role in GM’s strategy to be a leader in offering a range of fuel-efficient, fun-to-drive vehicles,” said GM Chairman and CEO Rick Wagoner.

In February, GM announced a $500 million investment to produce six-speeds at its Toledo, OH, plant.

HPPG manufactures five-speed automatic transmissions for the Honda Odyssey minivans and Pilot sport utility vehicles assembled at Honda’s plant in Lincoln, AL, 60 miles from Tallapoosa. When the new facility is at full capacity, it is expected to produce 300,000 transmissions per year, according to Honda’s press release. 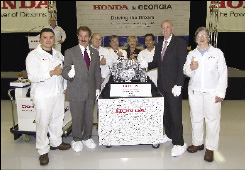 Transmission production began in May at Honda Precision Parts of Georgia.

Combined with Honda’s Ohio transmission manufacturing locations, the company now has the capacity to produce one million automatic transmissions per year in the United States.

Vacuum Carburizing Critical to Ford Transmission
Ford Motor Co. has decided to develop a vacuum carburizing system with a high-pressure gas quench to improve dimensional control in distortion-prone components, including the 211 ring gear for its 6F transmission. This gear needed to be produced within tolerances that could not be achieved with traditional gas carburizing and quenching technology.

“We were confident that gas quenching would serve the purpose, but a lot of development work by the team was needed to prove out the heat-treat processes and meet dimensional requirements,” said Bill Dowling, a 6-Sigma Black Belt from Ford’s automatic transmission operations, who headed up the project. 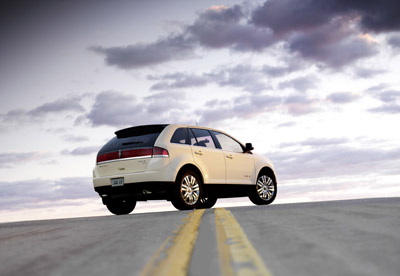 The 2007 Lincoln MKX will feature the 6F 6-speed transmission co-developed by Ford & GM. 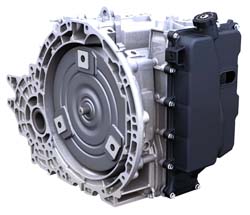 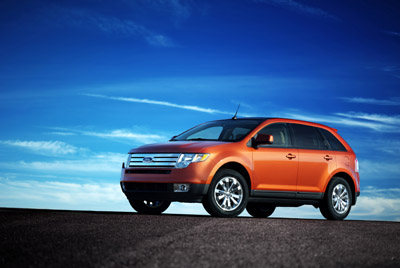 The 2007 Ford Edge will feature the 6F transmission.

The team developed a process that reduced distortion 50 percent and also improved fatigue properties compared with the traditional process. Vacuum carburizing also allows for the use of a lower-cost steel alloy while still meeting all the requirements for the parts.

“The savings on the material amount to several cents a pound,” said Dowling. “Considering the volume of transmission gears produced at Sharonville on the 6F program, the savings are fairly substantial.”

The 6F transmission is a six-speed, front-wheel drive automatic transmission that was co-developed with General Motors. It will be used first in the 2007 Ford Edge and 2007 Lincoln MKX crossover utility vehicles. 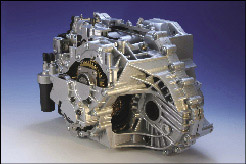 A dual-clutch transmission from Getrag.

Hybrid drive systems combine an internal combustion engine with an electric drive. In the case of parallel hybrids, the electric drive is fitted directly into the power flow of the drivetrain. The electric drive is used as a motor when accelerating and is used to convert kinetic energy into electrical energy when braking.

The dual-clutch transmission enables energy-efficient automatic shifting. Hybrid drive systems are designed to significantly reduce fuel consumption, especially in urban traffic. According to the release, the partners expect fuel savings of up to 20 percent compared with drive systems relying on conventional gasoline engines.

“The cooperation we have established with the world’s largest supplier to the automotive industry is highly promising for the future development of hybrid drive technology,” said Dieter Schlenkerman, chairman of the board of the Getrag Group. “The know-how of both companies will put us in the position to offer our customers throughout the world cutting-edge solutions for future drive concepts.”

Creating an Alternative: Automakers Work to Offer Hydrogen as the New Gasoline
Concerned with the oil supply, automakers have been playing a double game with gasoline, trying to conserve it while they worked to replace it.

Their conservation efforts have been apparent for years. For better gas mileage, gear transmissions were replaced with continuously variable transmissions in some vehicles, and electric motors were added in a number of autos to alternate with their gas engines. Also, additional speeds—a sixth, a seventh, even an eighth speed—are being manufactured on many gear transmissions to increase fuel efficiency.

But, automakers were also developing ways to replace gas, and an alternative fuel now coming to the fore is hydrogen.

Based on remarks by Gary S. Vasilash, editor-in-chief of Automotive Design and Production, that alternative may not be far off. Vasilash, who has more than 25 years’ experience in the auto industry, discussed hydrogen fuel cell technology in his keynote address at the official opening June 8 of LMT Group’s new automotive support center in Auburn Hills, MI, near Detroit.

In his speech, Vasilash said DaimlerChrysler AG is convinced hydrogen fuel cells are the future, and the automaker is working on the technology now. He added that General Motors Corp. continues to invest in hydrogen fuel cell technology despite the company’s current problems. “They are not deviating,” he said.

In an interview later, he added that GM plans to have a cost-competitive fuel cell system completed by 2010.

If viable, hydrogen-powered vehicles would require major changes outside automakers’ factories. Perhaps the most obvious change would involve the refueling of the cells. Hydrogen vehicles would need hydrogen stations just like regular vehicles need gas stations.

“The problem is infrastructure,” Vasilash said.

In the United States, as in other countries, gas stations seem to be everywhere, so drivers can conveniently access them. A similarly convenient system would need to develop as the use of hydrogen-powered vehicles grew and became widespread.

Vasilash also mentioned DaimlerChrysler’s development of BlueTec. This technology involves engine redevelopment to reduce diesel fuel consumption and emissions and an exhaust aftertreatment to further reduce emissions. This aftertreatment involves use of an aqueous solution stored in a reservoir that’s part of the vehicle. After his speech, Vasilash said BlueTec’s next milestone is its availability in more vehicles. He added that the issue with BlueTec is simply designing vehicles to accommodate the reservoir: “There is no hurdle that needs to be crossed.”

Time will tell whether hydrogen becomes the new gasoline, whether it proves to be commercially viable and how widespread its use becomes, but automakers have been playing their double game for years now to create an alternative to gasoline, in case another option is needed.