Gear Finishing with a Nylon Lap

Management Summary
The objective of this research is to develop a new lapping process that can efficiently make tooth flanks of hardened steel gears smooth as a mirror. The lapping is carried out using a nylon helical gear as a lap and using a simple mechanical device.

This paper first shows the lapping machine designed and manufactured by the authors and the procedure and principle of the lapping. As a result of the lapping tests,it becomes clear that the process can make tooth flanks of hardened steel gears smooth in a short time and that it is important to carry out the lapping using a nylon gear with a large helix angle and high teeth (teeth with addendums larger than their modules) under a condition of high rotating speed and light load in order to prevent increasing of tooth profile errors.

Moreover, the lapping process was varied to include microvibrations of the nylon gear. From the result, it is found that the addition of microvibrations enables this process to also reduce tooth profile errors of the work gears. The lapped gears’ running noise and load carrying capacity are considered, too.

Introduction
It is known that the tooth flank roughness of a gear influences its performance in power transmission--that is, the load carrying capacity of gears is improved, and the running noise and vibration are reduced by making the tooth flanks smooth (Refs. 1-2).

Gear finishing methods such as shaving, hobbing with a carbide hob, grinding and honing are used in the gear industry. However, they generally require a highly accurate machine tool, advanced technical skills and a lot of time, or they require the hardness of the work gear be restricted. Furthermore, it is next to impossible to make tooth flanks smooth as a mirror by these methods.

We propose a new lapping process that can productively make tooth flanks of hardened gears smooth as a mirror. The lapping process is carried out using a nylon helical gear as a lap on a simple mechanical device.

This paper will first show the mechanism of the lapping machine designed and manufactured by the authors and the procedure and principle of the lapping. Next, the lapping tests were performed on highly accurate ground gears. The test results showed that: 1.) the process could improve tooth flank roughness of hardened gears in a short time and 2.) the lapping conditions to prevent increases in tooth profile errors were clarified. Therefore, we could get highly accurate gears with smooth tooth flanks, as shown in Figure 1. 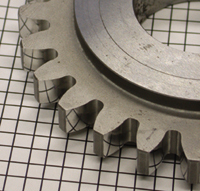 Also, by vibrating the nylon gear, the lapping process could improve the tooth profile and the tooth flank roughness of hobbed gears. Running noise and load carrying capacity of the lapped gears were investigated as well.

Lapping Machine and Procedure of Lapping Process
Figure 2 shows the lapping machine that was designed and manufactured by the authors. A work gear is meshed with the lap, a nylon helical gear, and they are rotated at high speed by the driving motor. Lapping load is applied by means of braking the driven spindle. Lapping fluid that contains abrasive grains is splashed between the tooth flanks of nylon and work gears as they rotate. The work gear is given a traverse motion at low speed along the axis in order to finish the whole flank. 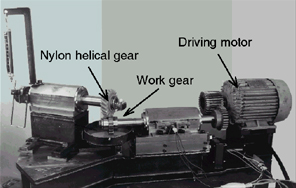 The specifications of the work gear and the nylon gear are shown in Table 1. The work gears are spur gears with modules of 4, 25 teeth, and face widths of 10 mm. The work gears’ tooth flanks were accurately ground after carburizing and hardening or induction hardening. The carburized gears and induction-hardened gears are made of chromium-molybdenum alloy steel JIS SCM415 and JIS SCM435, respectively. The hardness of the tooth flanks are 860 HV and 640 HV, respectively. 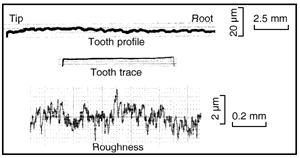 The test gears were ground using a Reishauer RZ300 E. This machine is a fairly common gear grinder in the United States and can achieve the above Ra. It may be difficult to achieve it in a normal production environment, though. An average roughness (Ra) of 0.4-0.5 µm may be more easily obtained in regular production with a threaded wheel grinding machine, like the Reishauer machine. However, this slightly rougher finish would not affect lapping time, cost, or other results presented in this paper.

The nylon helical gears were hobbed. Their tooth profiles were not highly accurate, as shown in Figure 4. The nylon gears are easily machined. The nylon’s properties are shown in Table 2.

Principle of lapping process. Figure 6 shows an example of tooth flanks of a nylon gear after lapping six work gears with WA500. A section that became dark during the lapping can be seen on the surface. Figure 7 is a photograph of the darkened section enlarged by SEM. It was found that the surface became rough, and abrasive grains were embedded in it. Chips from lapping are shown in Figure 8. They look like chips from grinding. These figures show abrasive grains embedded in the surface of a nylon gear after they’ve worked between the tooth flanks of the work gear and nylon gear. The nylon gear, in effect, acts like a grinding wheel. 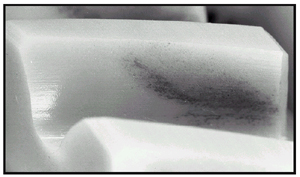 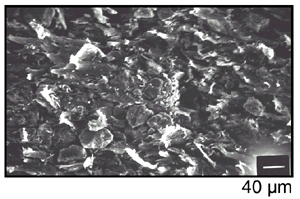 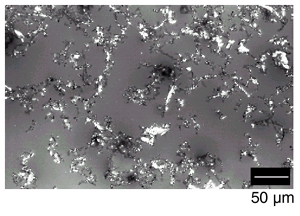 Lapping Tests of High Accuracy Ground Gears
Increases in tooth profile error. Figure 9 shows the tooth profile, tooth trace and tooth flank roughness of a carburized gear lapped using WA1000 abrasive grains, a nylon gear with a helix angle of 30 degrees, a work spindle speed of 1,210 rpm, and a lapping load of 15.2 N. The roughness was reduced to an Ry of about 0.5 µm through seven strokes of lapping, about 30 seconds. However, a concavity is found near the pitch point on the tooth profile. It was supposed that a heavier load caused the concavity near the pitch cylinder during the engagement of one pair of teeth.

Therefore, we tried to lap a carburized gear with a lapping load of 3.8 N and a work spindle speed of 2,290 rpm. The roughness was reduced to an Ry of about 0.5 µm through two strokes of lapping, about eight seconds. The tooth profile is shown in Figure 10. A concavity does not occur near the pitch point.

Figure 12 shows the calculated sliding velocity at every degree of rotation on a tooth flank of a work gear meshing with a nylon gear under a rotating speed of 2,290 rpm. The helix angles of the nylon gear were 30 and 15 degrees. The radius of 50 mm indicates the tip of the tooth in the figure. With this figure, it is clear that on the dedendum flank near the root, the sliding velocity is higher and the interval between the dots is smaller--that is, the movement of the contacting point is also slower than at other positions. 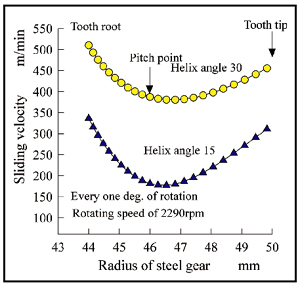 Figure 12--Sliding velocity on a tooth flank of a work gear.

Consequently, it was supposed that the removal amount near the root is larger so the concavity occurred there. With the smaller helix angle, the difference in sliding velocity along the tooth profile is larger. This resulted in the occurrence of a concavity. The same concavity also occurred on the carburized gear with a longer lapping time. 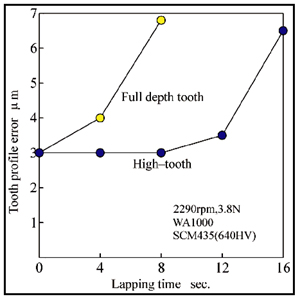 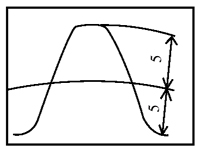 Figure 16--Contact of a work gear and a nylon gear with high teeth.

Figure 17 shows the tooth profile and the tooth flank roughness of a carburized gear after a roughing using a nylon gear with high teeth and a finishing using a nylon gear with full-depth teeth. The roughness is reduced in comparison with that before lapping, and no concavity is found on the tooth profile after four strokes of roughing. In the finishing stage, it took four strokes to remove roughing traces using GC6000 abrasive grains under a lapping load of 7.6 N. The roughness is reduced further through the finishing, but a small concavity is found near the root. Therefore, it is necessary to use a nylon gear with high teeth when finishing with fine grains. 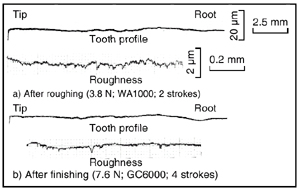 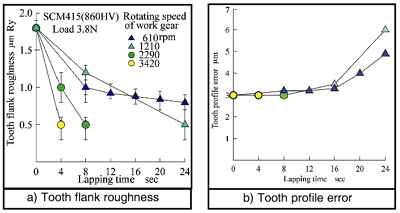 Lapping Process with Microvibrations Added to the Nylon Gear We next tried to improve the tooth profile and tooth flank roughness of hobbed gears through this lapping process by adding microvibrations to the nylon gear.

The lapping tests were carried out using a new lapping machine and hobbed gears having the same dimensions as mentioned above. The amplitude and frequency of the microvibrations were fixed at 0.2 mm and 88 Hz, respectively. The lapping was carried out under a lapping load of 15.2 N. The rotating speed of the work spindle was 2,000 rpm. These work gears were finished with a carbide hob after they were hardened to 350 HB. 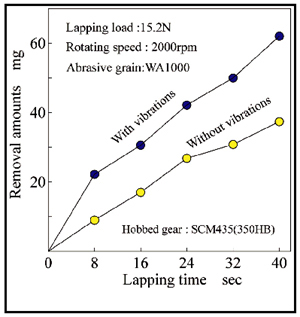 Figure 21 shows changes of tooth profile and tooth flank roughness via lapping with microvibrations. The gear was rough lapped using abrasive grains WA1000 and finish lapped using abrasive grains WA2000, respectively, for 16 seconds. It was found that the lapping with microvibrations improves the tooth profile as well as the tooth flank roughness.

Effect of lapping. In addition, we investigated the running noise and durability of a pair of gears lapped under the aforementioned conditions. The numbers of teeth of the driving gear and the driven gear were 23 and 25, respectively. The running tests were carried out using a power-circulation-type gear testing machine with a driving gear rotation speed of 3,580 rpm. Applied pitch-line load was 1,188 N/cm, which gave a maximum Hertzian stress of 745 MPa. 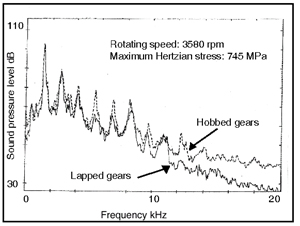 Figure 23 shows changes in the pitting area ratio. The pitting on the lapped gears occurs later and increases more slowly than on hobbed gears. 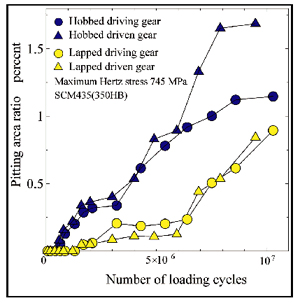 Figure 23--Effect of lapping on pitting.

Conclusions
We investigated the lapping process using a nylon lap and a simple mechanical device for finishing gear tooth flanks. Based on the results, the following conclusions are obtained:

1. In this process,abrasive grains embed in the surface of a nylon gear when they’re injected between the tooth flanks of the work gear and nylon gear. The nylon gear, in effect, works like a grinding wheel.

2. The process can improve tooth flank roughness of hardened steel gears to an Ry of less than 0.5 µm in a short time despite using an inaccurate lap.

3. In lapping under a low rotating speed and a heavy load, a concavity is apt to occur near the pitch cylinder during the engagement of one pair of teeth. As the rotating speed increases, the removal amount near the root is greater, so the concavity occurs there.

4. It is important to complete lapping in a short time using a nylon gear with a large helix angle and high teeth under a high rotating speed and a light load in order to prevent increases of tooth profile errors.

5. The addition of microvibrations to the process increases the removal amount and enables the process to improve tooth profile errors.

6. The running noise and the pitting rate of work gears are reduced through the lapping process.

This paper was presented at the ASME/AGMA 2003 International Power Transmission and Gearing Conference, held Sept. 3-5, 2003, in Chicago, IL, and was published in Proceedings of the 2003 ASME Design Engineering Technical Conferences & Computers and Information in Engineering Conference. It’s republished here with permission from ASME.

Dr. Masahiko Nakae is a professor in the department of mechanical engineering, Sasebo National College of Technology, Nagasaki, Japan. In the field of gear manufacturing, he specializes in the study of finish hobbing with CBN-tipped hobs and of finish lapping with nylon gears.

Dr. Kazunori Hidaka is a professor in the in the mechanical engineering department of Sasebo National College of Technology. His research interests include the corner wear on hobs and the finish lapping of gears with a nylon gear.