A Lean Strategy for Job Shops

POLCA: An Alternative to Kanban for High-Variety or Custom-Engineered Products

Owners of job shops and other manufacturers of custom-engineered or low-volume, high-variety products often struggle with controlling the flow of materials on the shop floor. Kanban-based strategies, which attempt to pull resources through the plant, are often ineffective because of the variety of products being manufactured and the unpredictability of volume requirements for each part.

For more than 10 years, the Center for Quick Response Manufacturing at the University of Wisconsin-Madison has worked with about 50 member companies on implementing a new strategy, called "quick response manufacturing" (QRM), which is designed specifically for manufacturers of custom-engineered and high-variety products. It can be applied on the shop floor, in the office operations, and throughout the entire supply chain.

For example, P&H Mining Equipment of Milwaukee, WI, has implemented QRM in production of large, round parts, including gears, splines and pinions. P&H operates in the high-variety and custom environment just described, and like several other of our center’s members, the company wanted to improve material control strategies.

As part of our QRM strategy for these companies, we devised a new material control system called POLCA (Paired-cell Overlapping Loops of Cards with Authorization). POLCA is a hybrid push-pull strategy that combines the best features of pull (Kanban) and push (MRP) systems, while avoiding their drawbacks.

Why Pull Doesn’t Always Work Why doesn’t pull work for the environment described above? Pull is part of the lean manufacturing approach, which works by creating "flow"--essentially by synchronizing all the steps in the company to the average rate of sales of the products. Typical concepts used for this include setting the Takt time for individual operations. (Editor’s note: Takt is the German word for "rhythm" or "beat," as in the beat of a musical piece. In lean manufacturing lingo, it refers to the pace or heartbeat of an organization. An organization with a takt time of two minutes will complete a finished product every two minutes.)

However, in a high variability environment, one could define an average Takt time based on a given month’s orders, but the daily demands on various machines could be so different that the production would be seriously out of balance. Further, note that pull is a replenishment system: when one item (or container) is used, a signal is sent to replenish it. For a company that makes thousands of different items, this implies that there is inventory of each of these items at each stage of the operation where a pull signal is being used. Worse, for a company that custom-engineers products, the pull system fails completely. There is no container of products to be replenished, since the parameters of the product are not known till the order is received and design engineering completed.

The QRM Strategy For a company serving these environments, top management needs to rethink its strategies for capacity, workforce, and organizational structure, to create the capability for flexible and fast response. Here we will focus on the material control aspect, which involves the use of POLCA.

However, unlike in a standard MRP system where a workcenter should start work at that time, in a POLCA system the workcenter cannot start unless the corresponding POLCA card is also available. The POLCA cards communicate and control the material movement between workcenters. While this may seem similar to Kanban, there are some important differences. Here are the three key features of POLCA that make it uniquely effective for the manufacturing environments we targeted:

1. POLCA cards are not specific to a product, as in a pull system, but are assigned to pairs of workcenters, and apply to all products going from the first workcenter to the second workcenter in the pair.

2. Whereas a Kanban card is an inventory replenishment signal, a POLCA card is a capacity signal: a POLCA card returning from a downstream workcenter signals that the workcenter has available capacity to process more work. When a workcenter reviews its list of jobs whose start has been authorized, it looks up the next workcenter for each job, and it can only work on a job if it has a POLCA card from that destination workcenter. 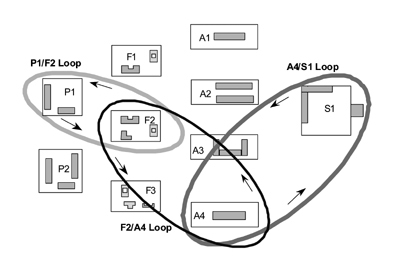 Figure 1--The POLCA system uses production cards circulating between overlapping pairs of workcenters to make most efficent use of production equipment in companies manufacturing custom-engineered and high-variety products.

The design of the POLCA system gives it several advantages for the high-variability or custom-manufacturing environment we described. First, POLCA helps in managing short-term fluctuations in capacity and also assists in reducing congestion on the shop floor. Essentially, the use of POLCA cards assures that each workcenter only works on jobs that are destined for downstream workcenters that will also be able to work on these jobs in the near future.

Second, it allows for an engineer-to-order environment through flexible routings that use workcenters as needed.

Third, POLCA cards are not linked to part numbers. This ensures that there is no proliferation of inventory for companies that make a large variety of products or components.

Finally, when combined with other QRM strategies, POLCA provides the flexibility to absorb variations in demand and product mix.

In partnership with several companies, the Center for Quick Response Manufacturing has implemented POLCA at factories in the United States and Canada. The benefits seen by those companies include reductions in lead time and work-in-process ranging from 30% to more than 80%, increases in percentage of on-time deliveries, increases in throughput of up to 18%, reduction in worker stress due to elimination of expediting, and increases in employee satisfaction.