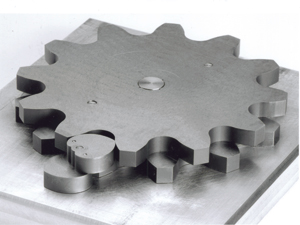 In this article, a laminated gear consists of two spur gears on the same axis, where the teeth on one gear are aligned with the tooth spaces on the other gear. The contact ratio for each mesh can be as low as 0.5. The basic geometry and circular fillet design are outlined.

Advantages
In some designs, it is advantageous to use laminated gearing instead of helical gearing. Specifically, in fine-pitch formed gearing (molded plastic, die cast, powder metal, stamped), tolerances are often so large relative to whole depth that the contact ratio is less than unity. In that case,it is necessary to use either laminated or helical gearing (Ref. 1).

And it should be noted that a worm in mesh with a helical gear has only point contact between mating teeth, with the potential for high wear (Ref. 3), whereas laminated gearing has line contact, and no axial thrust on the bearings. 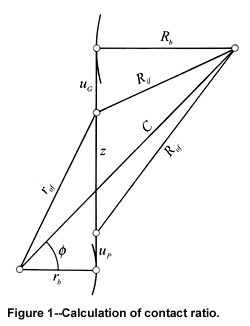 From Figure 1, it is seen that the contact ratio for each mesh is mp=z/pb, where

For a given center distance, the sum of the deviations from basic tooth thickness is (Ref. 4)

where uP is that in Equation 2.

Also from Figure 1, it is apparent that the inside form radius of the gear is

To plot the fillets, the mating gears are rolled together in tight mesh (Ref. 7). Rather than draw the rolling circles (also known as operating pitch circles), only the tooth profiles are plotted (which permits greater magnification) on 8½ x 11 vellum, as shown in Figure 2. 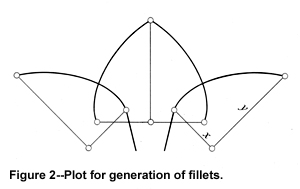 It is important to remember that whenever the outside form radius of the gear (Rof) contacts the base point of the pinion profile (as in Equation 3), then the specified circular arc falls on the radial line to the base point, not on the involute.

The four involute profiles in Figure 2 are traced from a single involute plotted on 8½ x 11 vellum (Ref. 8). 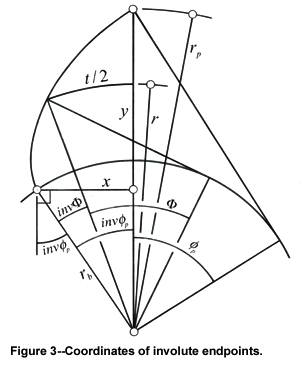 From Figure 3, it is seen that the angle between the base point of the involute and the centerline of the tooth is

Thus, the endpoints of the involute are at

The locations of the y endpoints on the centerline of each tooth in Figure 2 are calculated from right triangles.

Possible Disadvantages
It should be noted that this method does have some limitations. For instance, even though the illustration show both the driver and driven laminated gears with the laminations flat in form and closely side by side, practical manufacturing and assembly conditions may dictate the need for a spacer of some form on at least one of the gears. The benefits of laminated gearing are only available if, in each set of laminations, there is a very accurate rotational orientation of one outline to the other and that the two outlines themselves are very closely matched. Finally, another limit on reducing the number of teeth in the driver is the need for a root diameter of adequate size, either to permit mounting on a shaft or simply of adequate torsional cross-section to transmit torque to the gear teeth.

Richard L. Thoen is a consultant specializing in medium-and fine-pitch gearing. He has authored several articles and papers on measurement, involute mathematics, statistical tolerancing and other gearing subjects.