Today’s ever-evolving global eco-nomic engine is, in many ways, a wonderful phenomenon; you know—a rising-tide-lifting-all-boats, trickle-down-theory-of-economics dynamic at work.

Unless, that is, you run an airline.

News today abounds with headlines announcing major carrier personnel layoffs, new or higher customer fees, flight cut-backs and, worst case—bankruptcy. Airlines of course run on jet fuel—their most expensive business cost—and while the price of your car’s regular unleaded is skyrocketing, the same applies to jet fuel, and in significant numbers. An April 9th New York Times story reports that a 1 cent increase in the per gallon price of jet fuel translates to an additional cost to the industry of $200 million per year. 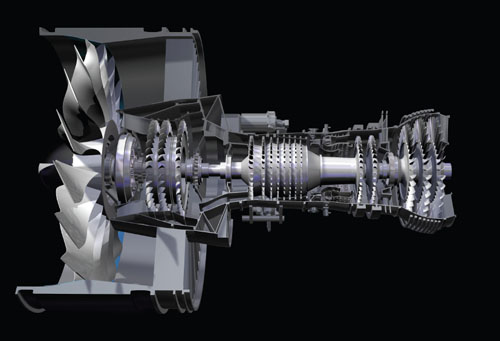 A cutaway view of the Pratt & Whitney geared turbofan jet engine. The addition of a reduction gearbox with a star gear system comprised of five stationary gears made the breakthrough possible. (All photos courtesy Pratt & Whitney)

But don’t dump all that airline stock just yet. Help is on the way, and a unique—some say revolutionary—outside-the-box design for incorporating gears into a jet engine is part of the reason why.

A propulsion revolution. That “revolution” is in full bloom at East Hartford, CT-based Pratt & Whitney (a United Technologies subsidiary), the designer and builder of aircraft engines, space propulsion systems and now—cue drum roll—the geared, turbofan (GTF) engine. The gear set speed reducer (transmission) is what helps make this engine a truly cutting-edge technological advance, with what the company calls a “state of-the-art gear system” enabling the engine fan to function independently of a low-pressure compressor and turbine, which results in significant fuel efficiency and reduced fan speed for a quieter ride.

That the engine was also developed to address environmental concerns should come as no surprise, as industries of all stripes are making “green” a best-practice marketing platform. Estimates vary, but available data show that airplane transit results in approximately two percent of the world’s greenhouse gases. And any airline that develops new technology in alleviating that concern stands to benefit with customers and airspace providers alike.

Enterprise becomes necessity. According to Bob Saia, Pratt & Whitney vice president/next-generation product family, the GTF engine is the realization of 20 years’ development, during which design challenges such as engine durability, weight reduction and installation optimization were resolved. But he says that with the ongoing reality of exorbitant fuel costs, the project assumed greater urgency.

“For several years, growing economic and environmental pressures have made the geared turbofan engine even more attractive. With sky-high fuel prices, increased emissions regulations, noise pressures and airlines looking for every opportunity to cut costs, an engine that can deliver double-digit reductions in fuel burn, emissions, noise and maintenance cost is the right product at the right time,” he says. “Today, we are investing more than $100 million (U.S.) a year to develop and demonstrate this technology so that we can be ready for entry into service in 2013.” Saia adds that while the current GTF is intended for next-generation regional jets and single-aisle mainline craft, “There are no limitations that prevent the GTF engine to power wide-body aircraft.” 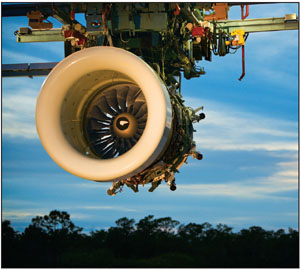 As proof that good things are worth waiting for, there was that long, 20-year slog of constant research and deve-lopment. In developing the GTF engine, P&W in 2007 designed and built a $12 million test facility in nearby Middleton, CT to challenge the GTF’s gear system with robust testing conditions exceeding those typically experienced in flight. The gear system test rig is capable of handling up to 60,000 shaft hp and simulating flight altitudes of up to 45,000 feet.

“I was impressed at how quiet the (GTF engine) was at idle and full takeoff power, requiring only minimal hearing protection and allowing the ability to hold a conversation while the engine was running at those high speeds,” says Bob Pekarek, director of power plant and component engineering for Northwest Airlines. “Typically, being that close to an engine at takeoff power requires maximum hearing protection and there is no chance of holding a conversation.

“The dramatically reduced fuel burn, noise and emissions of (the GTF engine) are significant advantages.”

The thrust of things to come. Gear professionals, engine designers and others in the industry know, of course, that turbofan jet engines are not new, and they are in fact standard for today’s jets. P&W’s Saia provides for the rest of us a short course in conventional jet propulsion. 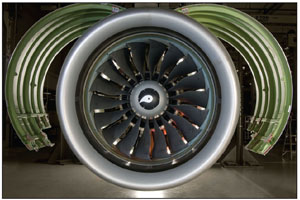 “Jet engines produce thrust by pushing air through a large fan at the front of the engine. A small portion of that air is compressed, mixed with fuel and ignited to power a turbine at the back of the engine, which in turn spins a shaft that runs through the engine to drive the engine’s fan. To improve fuel efficiency, engine makers work to maximize the amount of air pushed through the fan (bypass air), while using as little fuel as possible to drive the fan. The ratio of air pushed through the fan to the air mixed with fuel to drive the fan is called bypass ratio; the higher the bypass ratio, the more fuel-efficient the engine.”

But, P&W’s Saia explains, conventional turbofan engines have limits, in that “As the fan diameter increases to increase bypass ratio, the turbine must also grow to create more power to drive the larger fan. Fans want to turn at slow speeds, while turbines want to turn at high speed. With the fan and turbine directly connected by the shaft, a compromise must be made to maximize fan diameter (low speed) at the best turbine speed (a slower-than-optimum speed).

“Slower-turning turbines require more stages and higher airfoil counts to power the fan; the additional stages and airfoils increase the engine’s weight and operating costs. There becomes a point where the added weight and inefficiency of the larger turbine has cancelled out any fuel efficiency gained by a larger fan.” 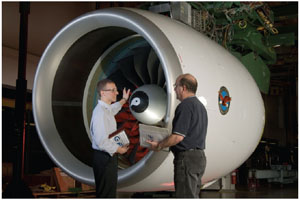 Which presents the challenge—how to reduce the speed of the outer ring gear in a significant way?

Answer: the addition of a reduction gear box—or transmission system—comprised of a star gear system with five stationary gears. As Saia explains, the gear box decouples the fan from the turbine so that each component can turn at its optimum speed, while also allowing for a lighter, more efficient turbine to turn at a higher speed in driving a much larger, slower-turning fan. The marrying of a faster-turning turbine with a slower-turning fan results in new-found fuel efficiency at a much-reduced noise level. In fact, the addition of the gearbox provides a low-pressure turbine speed of three times that of the fan. The system also includes a “swept,” aerodynamically enhanced fan for additional efficiencies.

Burning “greener” gas. So how does all of this reduce fuel consumption, cabin noise and pollutants? To break it down further, Saia says, consider that with a typical, direct-drive turbofan engine the limitation is that its turbine is most efficient, i.e.—creating the most power for the least fuel consumption—when it is rotating at optimum speed. And, as mentioned, this type of engine’s turbine and fan are unalterably linked, presenting an unavoidable compromise in speed.

But, says Saia, “The GTF engine breaks this paradigm. This game-changing engine architecture introduces a reduction gear system allowing both the fan and turbine to operate at their optimum speed. By turning a large fan—increasing the bypass ratio of the engine—fuel efficiency is improved by more than 12 percent. This is directly related to a 12 percent improvement in CO2 emissions. The slower-moving fan produces much less noise—50 percent less than today’s engines. We’ve also introduced an advanced combustor to reduce NOx emissions by 55 percent.

“The GTF engine also delivers an engine design which is shorter and lower-weight than today’s power plants.” 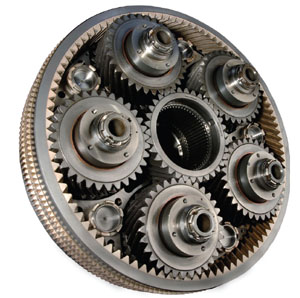 A close-up of the five stationary gears in the geared turbofan engine speed reducer gearbox.

With the critical, grind-it-out R&D completed, Pratt & Whitney has big plans for the GTF engine. And why not?

“(Last year), Pratt & Whitney’s Geared Turbofan engine was selected as the exclusive power for the new (aforementioned Mitsubishi Regional Jet; officially launched this March with an order from All Nippon Airways) and the proposed Bombardier CSeries mainline aircraft,” says Saia. “The CSeries is expected to launch later this year. Both aircraft are scheduled to enter service in 2013.”