Here's How to Do It. 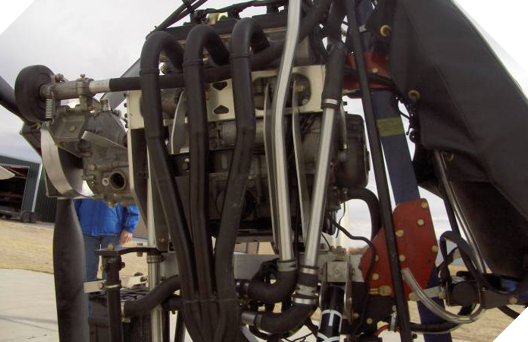 Were Thomas Jefferson around today, he'd be all over the Double-A engine's development and everything it represents.

And what is the Double-A engine; what does its successful design and execution represent, you ask?

Well, maybe substantial progress towards the democratization of general aviation in our lifetime. If, that is, would-be "con-trailblazers" like Michael Arndt, an enterprising industrial engineer with a vision, can attract enough deep-pocketed investors into a brave new world of flight.

Arndt and some students at Virginia Commonwealth University (VCU) are involved in a work-in-progress, i.e. — The Double-A: The safe and affordable 200 horsepower aircraft engine. The project's goal: To build and ground test (No licensed pilots in the group!) the Double-A engine and make its construction plans and parts list freely available under the GNU open-source license so anyone can build it.

(Exciting as this prospect sounds — and indeed it is — the Dickensian "everything for everybody" concept is not a new one in personal transportation. Think Henry Ford and his Model T automobile: designed, manufactured and price-pointed (in 1914 an assembly line worker could buy a Model T with four month's pay) to make them affordable to more working stiffs than ever imagined up to that time. Nevertheless, that is ancient history. And besides — Ford was no Tom Jefferson. Then again, some historians would say Jefferson was no Jefferson. But we digress.)

High time to let Arndt take the controls from here — in his own words — perhaps informing us of some new history of his own in the making:

"General aviation (GA) and light planes are a great way to travel and are a lot of fun. But they can be very expensive. An experimental class aircraft body can be had for $15,000, an instrument panel for $2,000. But a new engine will set you back $40,000.

"(Yet even today) the standard engine for a typical two- to four-seater is an air-cooled, four-cylinder design very similar to a 1960 VW Beetle. It's fueled by a carburetor and fired with magnetos — like your lawn mower. Yet the price for this engine is what keeps many people from flying. So we are building this advanced technology prototype to give pilots and student pilots a way out and up.

"The engines used in the Double-A have already seen aircraft use, and are valued for their reliability and robust design in the snowmobile community, where an engine failure in the bush can easily prove fatal.

"Each engine weighs about 110 pounds dry, and a typical single-engine installation comes in around 150 pounds. We have a target weight under 350 pounds for the Double-A in running condition, compared to the 300 pound dry weight (non-running) of a 200 horsepower IO-360C.

"The first designers to pioneer this configuration (http://www.infortel.com/cozy) packaged two 100 horsepower Suzuki Swift engines weighing slightly over 400 pounds; their design is still flying today. Sixteen years of improvements in engine design allow us to shoot for a lower weight than was ever possible before.

"The Double-A package has one other important reliability feature, i.e. — it does not use an aftermarket engine control unit (ECU). A modern engine takes enormous effort — with millions of engineering man-hours to design — and too many aircraft conversions start with cutting off +/-25 percent of that design — the original ECU. Most automobile engines leave no choice, as the original ECU will not run without the car. But snowmobile engines do not have this problem and will run just fine — in or out of a sled.

"(Beyond the benefits listed above, the Double-A runs on the same automobile and small-engine gasoline you buy at the pump — not pricey aviation gas. Detailed gallons per hour versus percentage horsepower measurements will be published after the test program.)

"Also, as a used snowmobile engine costs around $4,000 — instead of $40,000 — the cost of replacement parts and repairs is greatly reduced. The closed-deck snowmobile engine used in the Double-A is quite robust; it boasts the very latest fuel-injection technology and liquid cooling. Experimental and professional, certified aviation mechanics will find the Double-A much simpler, and an absolute treat to work on, because it's tighter tolerances, modern gaskets and liquid-cooled body are much more accessible, forgiving, and ergonomically approachable than certified aviation engines.

"So, as the plans will be released for anyone to use, it's possible that a bright spark with more money and a suitable plane (but no engine) might take our work rather quickly and put it into the sky. If anyone is interested in potentially being the first to fly with the Double-A, we encourage them all to contact us (https://doubleaengine.wordpress.com)."