Robots are a Mans best Friend

Robots are a Man’s Best Friend

Pretty much everyone old enough to utter the familiar, dual syllabic refrain of “beep boop” in the electro-mechanical, monotone pitch from every sci-fi movie ever made has the same idea of what a robot looks likes. And, coincidentally, everyone is dead wrong. 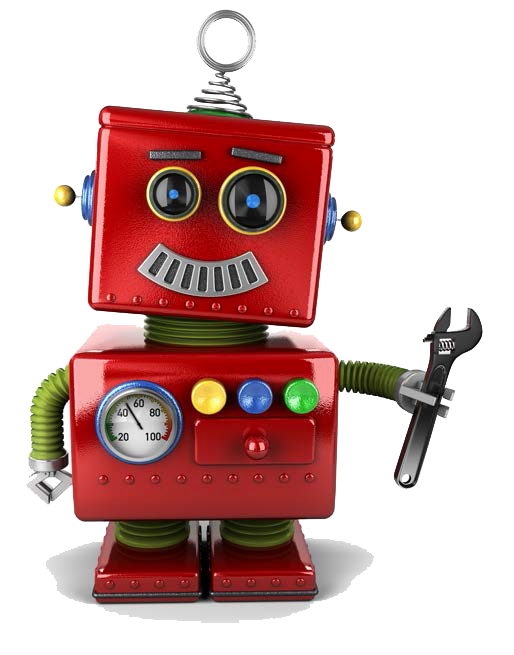 It turns out that modern day robots — at least the ones that are functioning parts of everyday industrial life — aren’t all metallic chrome finishes and stiff, rudimentary movements straight from an early 80s music video. No, these robots are far less about following a futuristic color scheme and more about getting the job done, often with their one long, dexterous arm painted the viant shade of citrus fruits.

No frills, no bells and whistles, and certainly no “beep boop.” Which is good, because the gear industry is a no frills kind of place. In fact, it’s the kind of place that typically aligns itself with blue collar, bygone cl ichés like “elbow grease” and “sweat of his ow” over the flashy gizmos of tomorrow.

Then again, why would any sane person do a job with ten people when they can do it with two?

This is an inarguable truth, one that the gear industry can confirm with the utmost authority by merely taking a stroll down to their factories for a quick once-over. Robots aren’t infallible, but with recent advancements in vision and sensor technology, they can increasingly perform tasks just as efficiently as their fleshy counterparts — and oftentimes even more so.

Now some people will take that information, fret wildly over an already diminished ration of available jobs (even though the old song and dance in manufacturing is the scarcity of skilled labor workers) and then retreat to a place of fear and paranoia — think Will Smith’s pie-eating, gun-slinging character in “iRobot,” a movie one would hope proves to be a woefully inaccurate representation of the future. 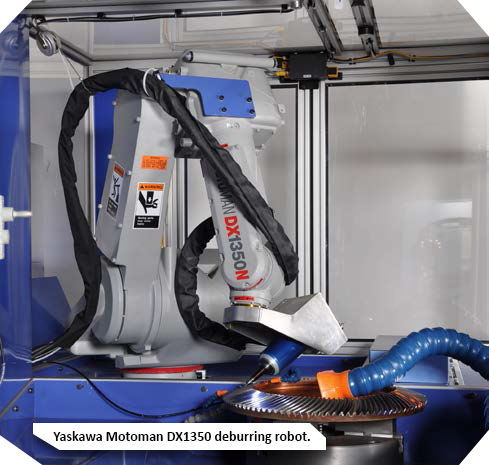 “We actually have our own 3D scanning software that we’re very high on,” added Geoff Dawson, account manager of Fanuc’s North American distribution group. “Sometimes companies will buy our robots but are more comfortable designing their own software.”

Dawson and Andy Glaser, vice president of sales at Yaskawa America Motoman Robotics (West Carollton, OH), both agreed that bin picking has been the major development in gear robotics in the past couple years.

Robots are synonymous with the future, really. Blame the futurist helmsman of yesteryear like Fritz Lang and Stanley Kubrick all you want for etching the 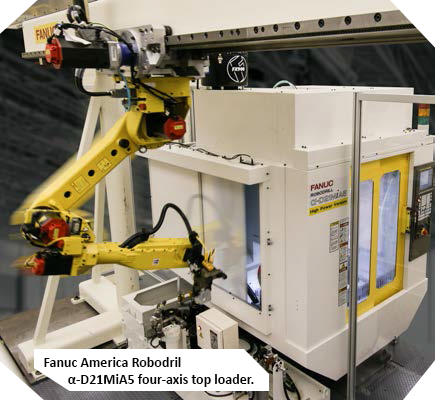 symbiotic bond into humanity’s subconscious decades ago. The fact remains that they’ll forever be linked like nuts and bolts, as inseparable as the two sides of a shiny red penny.

But even in a field as forward-thinking and rapidly changing as robotics,sometimes it can be of great use to stop the upward trajectory for a moment and simply linger on the present for a pause or two– or, in Arrow Gear’s (Downers Grove, IL) case, the past.

Roughly eight years ago, Arrow President Joseph Arvin invented an apparatus and method for chamfering and deburring in which gears are mounted to an indexable chuck, which is then used to position the gears for various machining operations.

Well, the calendar is freshly flipped to 2015 and Arrow’s latest robotic advancement is still Arvin’s from the George W. Bush administration. As the famed saying goes — if it ain’t broke, why build an entirely new robotic interface to replace it? “I can’t say that we really have anything new,” said Kerry Klein, Arrow’s vice president of sales and marketing. “We have been using robotics in deburring. Arrow Gear actually developed a machine used for deburring, but that was many years ago. We haven’t really updated that at all and we’re not really looking at any additional robotics at this time. “

We’re looking to increase our deburring capacity, but we’re actually looking at five-axis technology for that.”

Klein said that while Arrow hasn’t made any significant changes — or slight changes, either — in terms of robotic machinery, they’ll be on the lookout to potentially make some improvements in 2015. It all comes down to sense and sensibility.

“We manufacture gears, so if it makes sense to buy robotics to improve our processes and improve our efficiencies or something like that, certainly we could [add more robotic technology],” Klein said. “Sometimes it makes sense in medium to high volume manufacturing is auto load and auto unload, where the robot is actually loading the part instead of a person.

“We don’t do a large enough batch volume to justify doing that. I’ve seen it at other gear facilities but not here.”

So for Arrow — and for the majority of gear manufacturers, to be fair — the main need for robotic technology is with deburring. Arrow currently has two deburring robots at their facility.

“Every time you hob a gear or grind a gear, you create sharp edges,” Klein said. “The sharp edges have to be taken out for safety reasons and also for mechanical reasons. You can do that with a grinding wheel on a drill, basically. You have air and you hook it up to an air gun and then the wheel spins and you just do it by hand, which we do quite a bit of that as well. Of course, by doing it by hand you’re risking that the hand operator is going to make a mistake and do it too deep or too shallow, touch something other than the tip of the tooth, whatever.

“Of course, you have to program that into the machine. You have to develop that for each and every part. The tradeoff is that if you’re running a batch every hour, then you’re programming every hour, which becomes ridiculously time consuming, whereas if I’m doing it by hand the operator can adjust to every part no problem. So it’s a mix.”

Staring across the way at the other end of the plane is sales manager Alex Miller of ABB Robotics (Auburn Hills, MI), who reaffirmed Klein’s position that deburring robots are still the cherry on top of the robotic/ gear sundae, but first mentioned ABB’s latest innovation released in the past year — a system that places and removes gears from heat treating furnaces.

“It has vision and it handles the gears very gently,” he said. “You know how they’re kind of malleable when they come out and it’s a system that’s foolproof to make sure the gears are treated correctly. That’s probably the newest thing we have.”

“Of course, we also have deburring robots, but that’s nothing new.”

OK, that’s all well and good. Retro is en vogue right now, anyway. But what of the future?

If you ask Glaser, vice president of sales at Yaskawa America Motoman Robotics (West Carollton, OH) the future looks strangely similar to the present — just with a few nuanced tweaks and improvements.

“The robot — and I hate to say it, because I’m a robot guy — but it’s really a dumb device [in the case of gear manufacturing],” Glaser said. “But what we do is equip it with some very smart sensor technology. That’s really what has changed the landscape of robots in the gear industry.

“The robots are the same but their capabilities are improving drastically.”

“I would have to agree with that statement,” said Dawson. “We’re the largest robotics supplier in North America, so we’re constantly looking to advance our product and stay ahead of the competition. We pride ourselves on being a robot company — we use our robots to build robots. So we really stay true to ourselves and always want to be the one with the latest advancement.”

The most recent of these advancements, according to Glaser and Dawson, is random bin picking

“Over the last two years, bin picking technology with vision has really come on strong,” Glaser said. “We use a company called Universal Robotics in Tennessee, and they make what is what I think is the world’s leading 3D vision packages. Where others fail, they succeed. Their sensors overcome heat, they’re much more industrial and they’re much more cost-effective sensors.

“The bin picking is more of new advent where you can just directly grab these forgings or machine pieces right out of a bin that are loosely located.”

While Glaser noted that gear robots have seen significant improvements in the areas of vision, heat resistance and overall durability in the last several years, there remains one hindrance to the machines’ advancement.

“I will say the gripper is still an issue in this particular market,” he said. “The gripper technology still has not changed that much. If you’re going to do bin picking, a lot of times what you have to do is roughly grab the piece out of the bin, and then you’ll have to qualify it and then regrip it.

“You’re not going to simply just go and grab a part out of a bin like a human, orientate it automatically while you’re picking it up and place it like a human would.”

It would seem that, despite the advanced state of robotics in the gear industry at present, humans are in no danger of being completely replaced by robot overlords — at least not anytime soon.

All of data collected equates to a winwin. Robots are here to help and here to stay, but their station as underlings and minions is well-secured. Detective Del Spooner can put down his sweet potato pie, holster his hand cannon and sleep soundly for the time being. 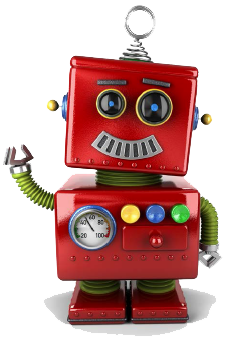