How should we consider random helix angle errors fHβ and housing machining errors when calculating KHβ? What is a reasonable approach?

Let us look at a mesh between a pinion and a gear. Both shafts are supported in a housing. Then, we should consider the following three errors:

These errors describe how much the flank of each gear is misaligned to the gear axis.

This error describes how the two gear axes are misaligned with respect to each other. This is often simpli¬fied to the gear shaft misalignment with respect to the shaft of the pinion (or vice versa).

The errors fHβ1 and fHβ2 can either be measured and averaged values from production or they can be determined from the gear quality number Q; e.g. — Q = 6 (gear quality 6 as per ISO1328). The error fpar is more difficult to determine, as it not only considers the misalignment of one shaft to the other due to the misalignment of the housing bores, but it should also consider variations in bearing operating clearances and the misalignment between the gear pitch cylinder with respect to the corresponding shaft axis. For the sake of simplicity, let us assume the housing bore arrangement is tolerated in such a way that we know the permissible shaft or gear axes parallelism error from the manufacturing drawing.

All errors are considered as random and the mean is zero (e.g. — tolerances given in drawing are symmetrical). The errors are hence described as a tolerance around zero, i.e. — fHβ1 = ±a, fHβ2 = ±b and fpar = ±c where a, b, c are values in micron.

Now the question is how the tolerances or permissible errors — a, b, and c — are to be combined for the calculation of KHβ. For the resulting misalignment we define the tolerance by the character d and find in general terms:

In a worst-case scenario, the values would be added up giving a resulting misalignment:

However, as the errors a, b, c are random values, this approach is clearly conservative and not realistic. It is unlikely that if we combine two gears and a housing that, for all three components, we happen to select the worst-case of each. The resulting error will be overly high and will result in too high a crowning value, resulting in an unnecessary stress concentration on the flank in operation.

If 99.73% of all gears and housings are within specification (3-Sigma rule applies), we know that three times the standard deviation of the manufacturing error is equal to the tolerance value a, b and c. Thus assuming that 99.73% of all gears and housings are within specified tolerances, we may define the manufacturing errors as normal distribution N, with mean value μ, standard deviation σ, valid over the range of the tolerance fields defined above:

Also, we may express the resulting error, fma, as a probability density function as follows:

Because fHβ1, fHβ2 and fpar are independent of each other, we find the standard deviation σ4 as follows:

Which means that after assembly, 99.73% of all gearboxes have a total misalignment of the flanks with respect to each other of fma = ±d — where d is calculated using the above formula. 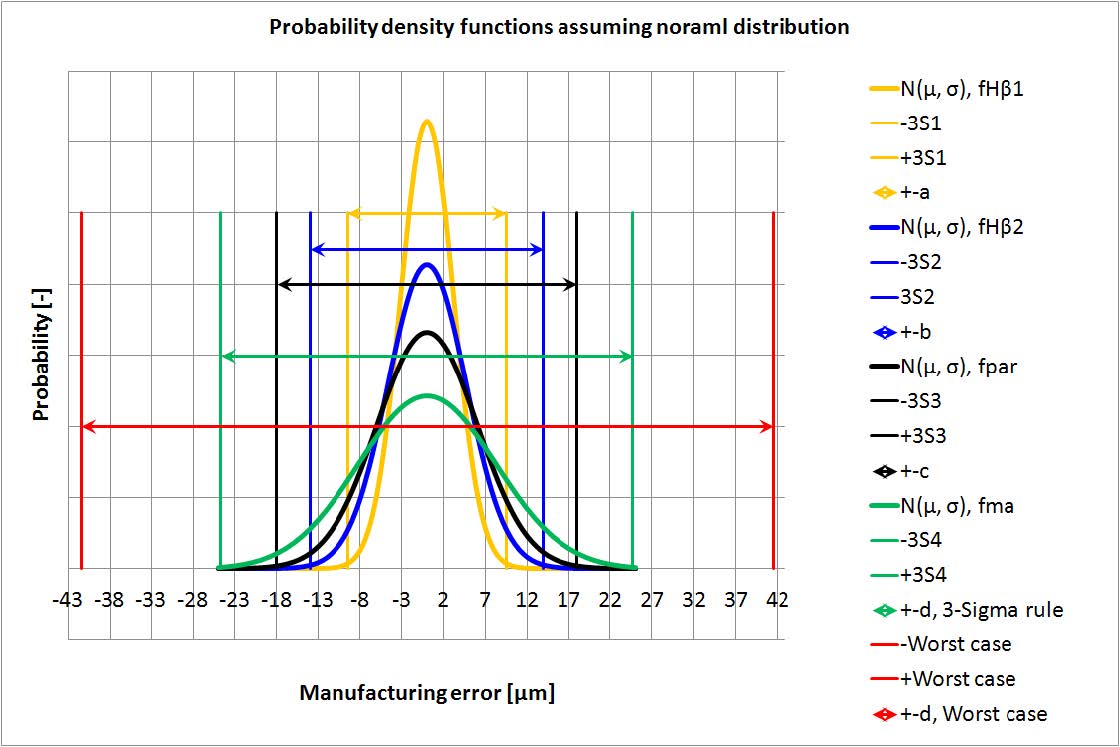 The above relationships are shown in Figure 1.

The probability density functions (assumed to be normal distributions) of the three basic errors — fHβ1, fHβ2 and fpar — are shown in orange, blue and black. Also shown are the tolerances ±a, ±b, ±d corresponding to ±3*σ1, ±3*σ, ±3*σ3 (where σ is the standard deviation).

Combining these three random errors, we find the probability density function (again assumed to be a normal distribution) of the resulting error fma in green. Also shown is the tolerance ±d corresponding to ±3*σ4.

For comparison, the worst-case scenario where d = a + b + c is shown in red.

We can clearly see that if we use the worst-case scenario, the value for d is much higher than the value for d, were we to use a statistical approach.

Applying the above formulas we find that the resulting tolerance range ±d if we apply 3-Sigma Rule as:

And if we apply a worst-case scenario, we find:

Considering the above statement that the worst-case approach is considered as overly conservative, then, for the above gear pair, we would consider a random manufacturing error in the mesh of fma = ±d = ±24.7μm, when calculating KHβ along ISO6336-1, Annex E.

KHβ calculation using statistical or worst-case scenario for fma. Let us consider again the above gear example. We apply helix angle modifications on the pinion such that we compensate the shaft bending, shaft torsion and bearing deformation. 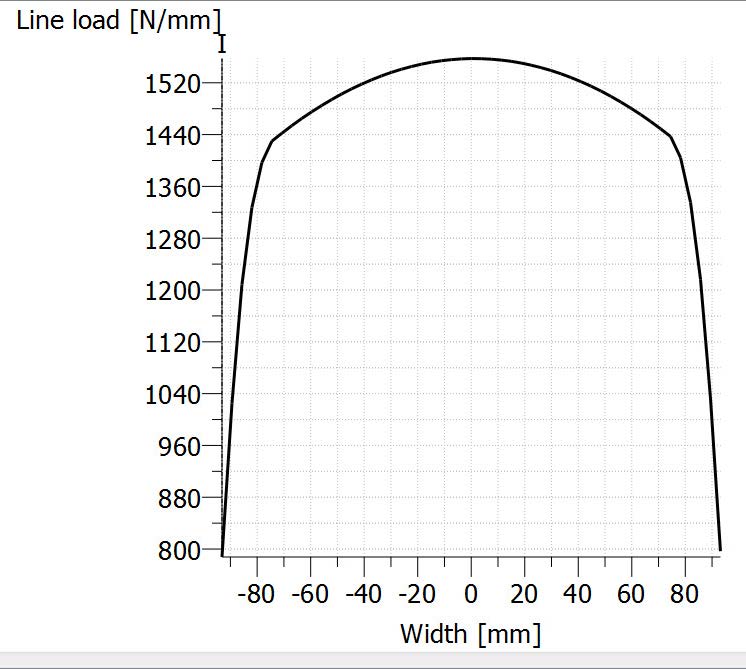 Figure 2 Line load distribution in the mesh for the example — not considering any random manufacturing errors; KHβ = 1.08. 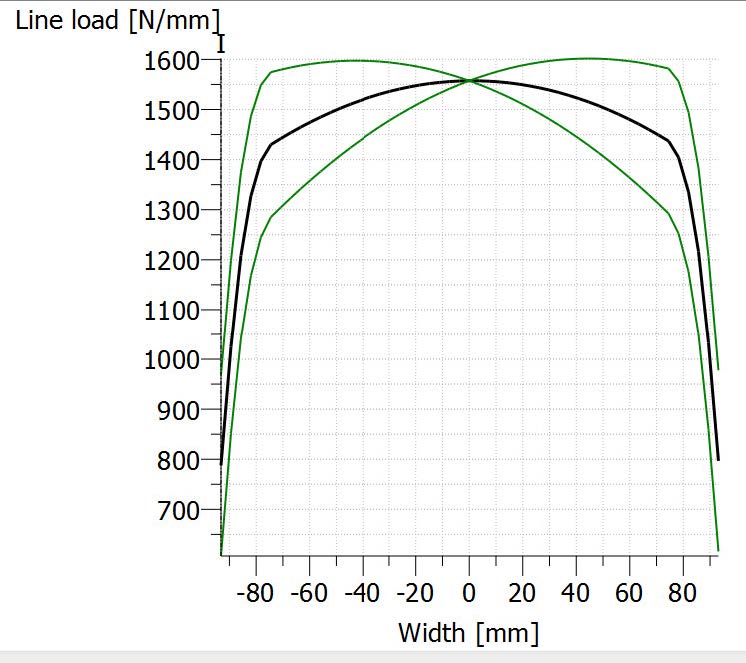 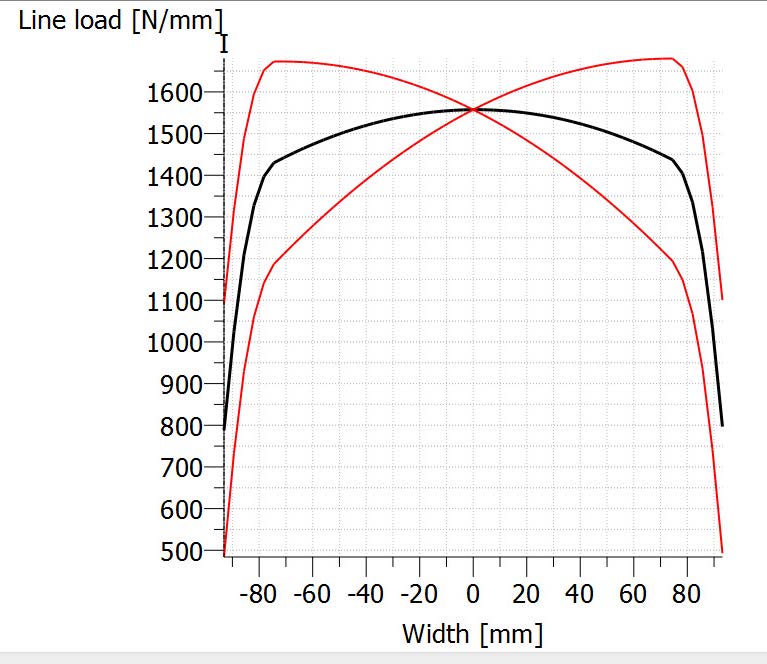 The result is a symmetrical line load distribution, calculated along ISO6336-1, Annex E. If we ignore the random manufacturing error (assuming fHβ1 = fHβ2 = fpar = 0.0μm), the load distribution is then symmetrical and highest value lies in the middle of the gear face width due to an applied crowning of Cβ = 20μm. Let us also apply a curved end relief over 10% of the gear face width per side; the amount is CβI = CβII = 45.0μm (notations as per ISO21771 apply).

If we now consider the random manufacturing error fma = ±24.7μm (from the 3 Sigma-Rule), we find three line load distributions (one without manufacturing error, one using fma = +24.7μm, and fma = −24.7μm), as shown below. The face load distribution factor has now increased to KHβ = 1.11. And yet, the highest line load remains within the crowned part of the face width; thus the design would be deemed quite acceptable.

But if we consider the worst-case manufacturing error — fma = ±41.5μm — we find the below line load distributions. The face load factor is now KHβ = 1.16 and we find that the highest line load is just where the end relief is about to start, thus rendering the design unacceptable in this case. 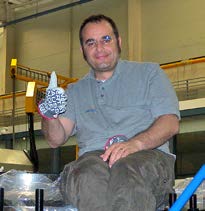 Hans-Peter Dinner studied mechanical engineering at the Swiss Federal Institute of Technology (ETH), where during his studies he spent time with Mercedes Benz working on FEM of car bodies; with Buhler in South Africa for training; and with the National University of Singapore for writing his thesis on FEM analysis of medical devices. He began as an FEM engineer, working with the leading consultant in Switzerland on welded structures, pressure vessels and satellite structures. Dinner later joined a leading roller coaster design company, being responsible for all strength verifications. He then moved on to KISSsoft AG, supporting customers in the use of their gear software, working on gear optimization projects, and ultimately transitioning to sales of KISSsoft products, with a focus on the Asian market. In 2008 he started his own consultancy firm, EES KISSsoft GmbH, sharing his time between KISSsoft support and sales in Asia and project work. Key projects included design and testing of SCD3MW and SCD6MW wind gearboxes, and large-bearing calculations for cranes and wind turbines as well as gear optimizations for sugar mills, vertical roller mills and tractors. Dinner’s main interests are planetary gearboxes, tooth contact analysis and testing.

An easy-to-use approach has been presented showing how random gear helix slope deviations and shaft parallelism errors due to housing errors can be considered in the calculation of KHβ. It is shown that adding up all random errors in a worstcase scenario is overly conservative. Applying the 3-Sigma Rule, errors may be combined in a different way such that the resulting error covers 99.73% of all cases. The difference in the resulting KHβ values when using this worst-case approach (in the above example, KHβ = 1.16) vs. the more realistic statistical approach (KHβ = 1.11) is significant when optimizing a design.

The use of the above statistical approach in consideration of manufacturing errors in the calculation of KHβ along ISO6336- 1, Annex E or AGMA927 is recommended.

A word of caution: experience shows that when designing gear lead modifications, or when calculating gear load distributions, much attention should also be paid to the bearing deformation and variation in bearing operating clearance. These effects are not elaborated above, but are summarized in the error fpar.